The time had finally come, smart presented the #1 in its final version.

All key data on the brand's first SUV can of course be found at smart eMotion. Also, don't forget to comment below. I'll be at smart tomorrow and I'll have an exclusive demonstration of the vehicle. Of course, I'm also happy to ask your questions.

Very close to the study

At the 2021 IAA, smart had already shown where the journey was going to head with the Concept #1 and during my interview at the IAA they assured me that the final car would be pretty much the same. In fact, they kept their word and the #1 remains true to its show car. 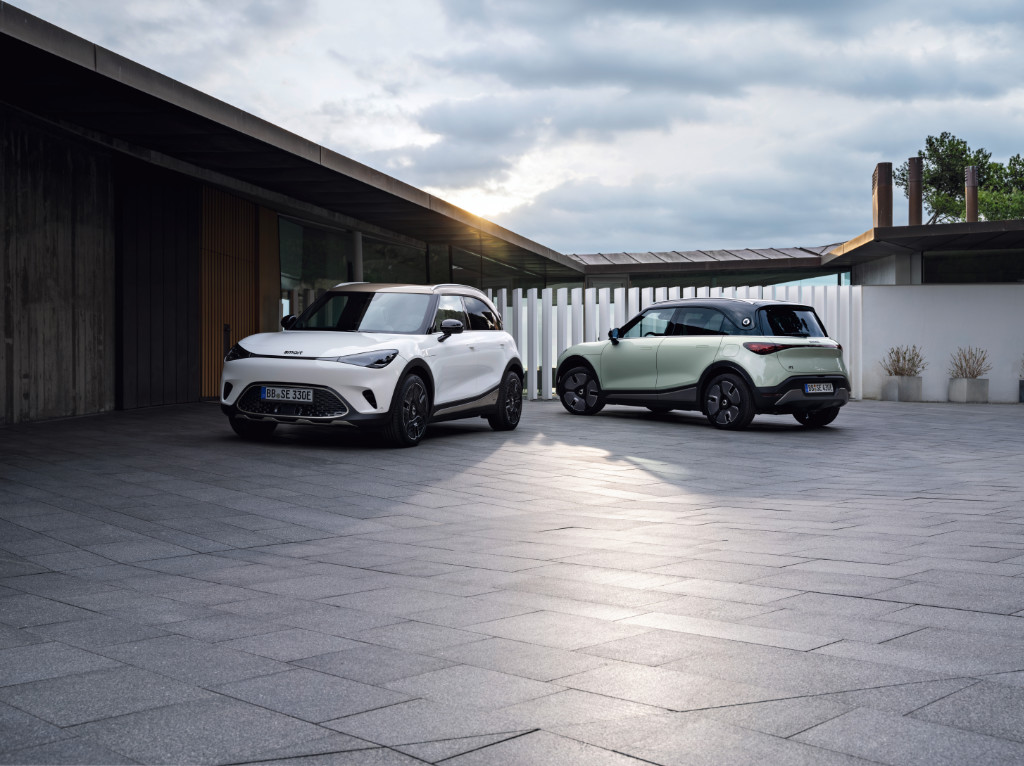 As announced, it is a smart in SUV format. With a length of 4.3 meters, it is significantly longer than a smart fortwo and also the already discontinued smart forfour. However, it does not replace the two smart icons, it expands the product portfolio. The smart eMotion community had already theorized what a future smart fortwo could look like in the past, but smart has not yet left out any clues yet.

But back to the smart #1: All around it brings the brand into the current decade. LED headlights and trim strips adorn the front and rear. In addition, there is now finally a frunk, so that the charging cable no longer has to slip through the trunk and always get in the way. 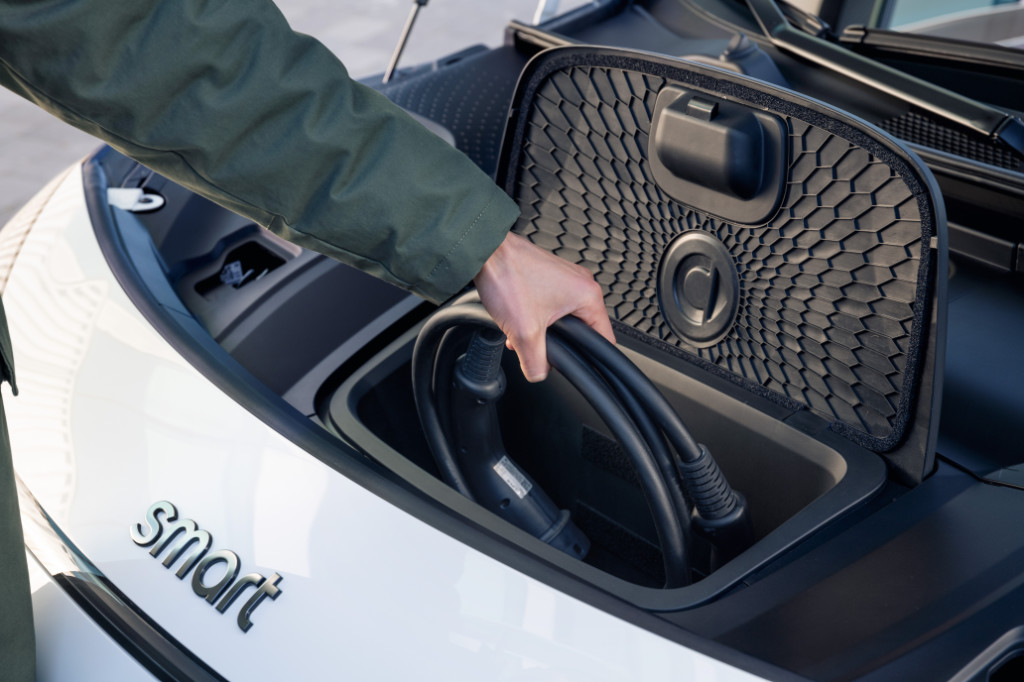 Also subtly striking: the fold-out door handles. Thanks in part to them, the smart #1 has a drag coefficient of just 0.29. No other vehicle in this class offers less air resistance. This has also been confirmed by wind tunnel tests in the past. 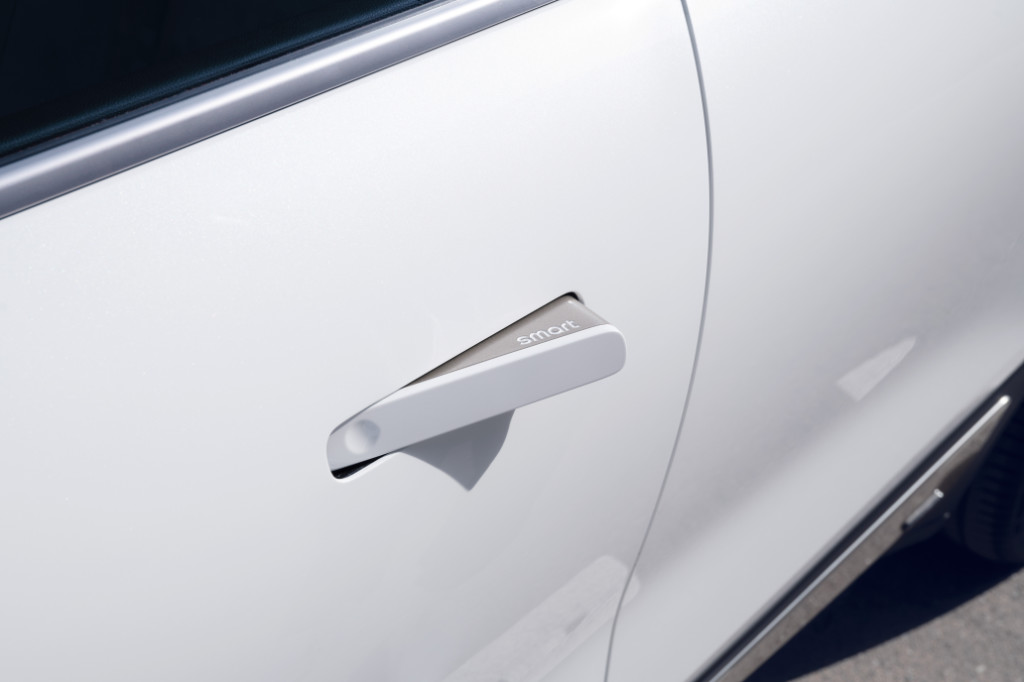 Overall, the smart #1 has a total weight of 1,820 kg and puts this comfortably on 19" rims with a wheelbase of 2.75 meters. This means that the wheelbase of the #1 is longer than the entire smart fortwo. Nevertheless, it the #1 doesn't seem as big as you now might think. 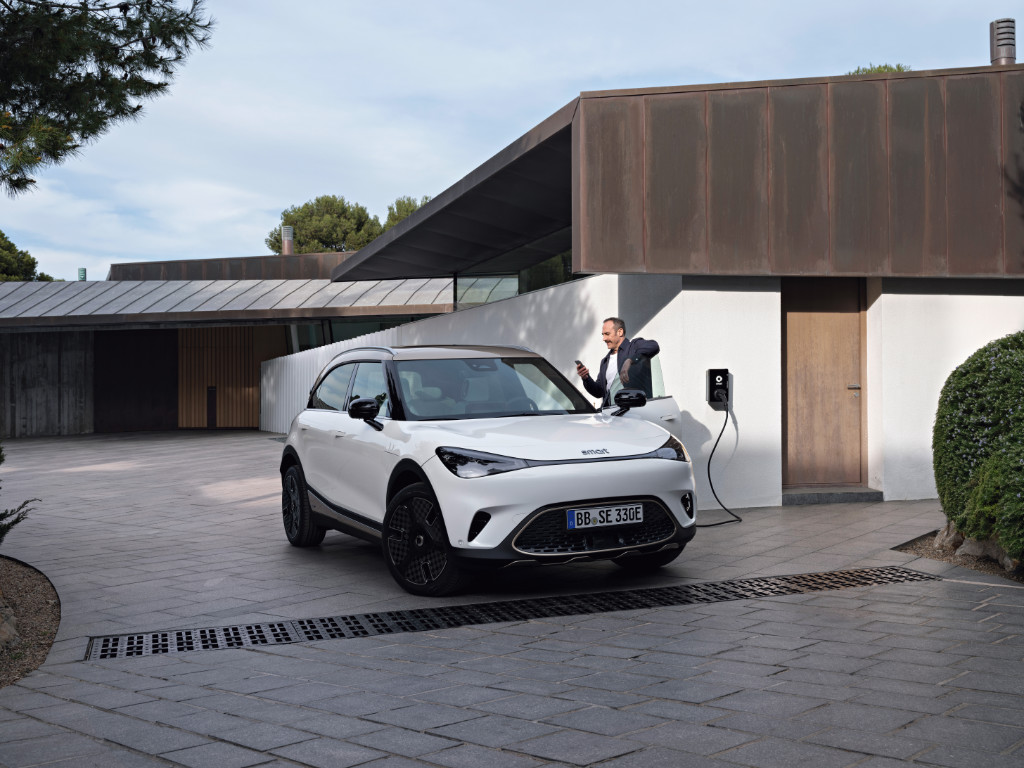 But now the most important thing: Charging, consumption and drive train

The smart #1 is by far the brand's most powerful vehicle to date. Even if you take into account the vehicles that Brabus had further refined and tuned in the past. Fortunately, they continue to rely on rear-wheel drive, the only right drive train for electric cars if you don't have all-wheel drive. With 200 kW (272 hp) it is definitely very sporty and gives you an idea of what an all-wheel drive variant could do in the future. Already in this base variant the smart does 0-100 km/h in under 7 seconds. It is locked at 180 km/h and thus also the first electric smart with which you can easily move along the German autobahn.

The scope of delivery includes a type 2 charging cable and an ABB wall box is also available for charging at home. smart has found strong partners for public charging so that charging is worry-free and convenient. More about this here. 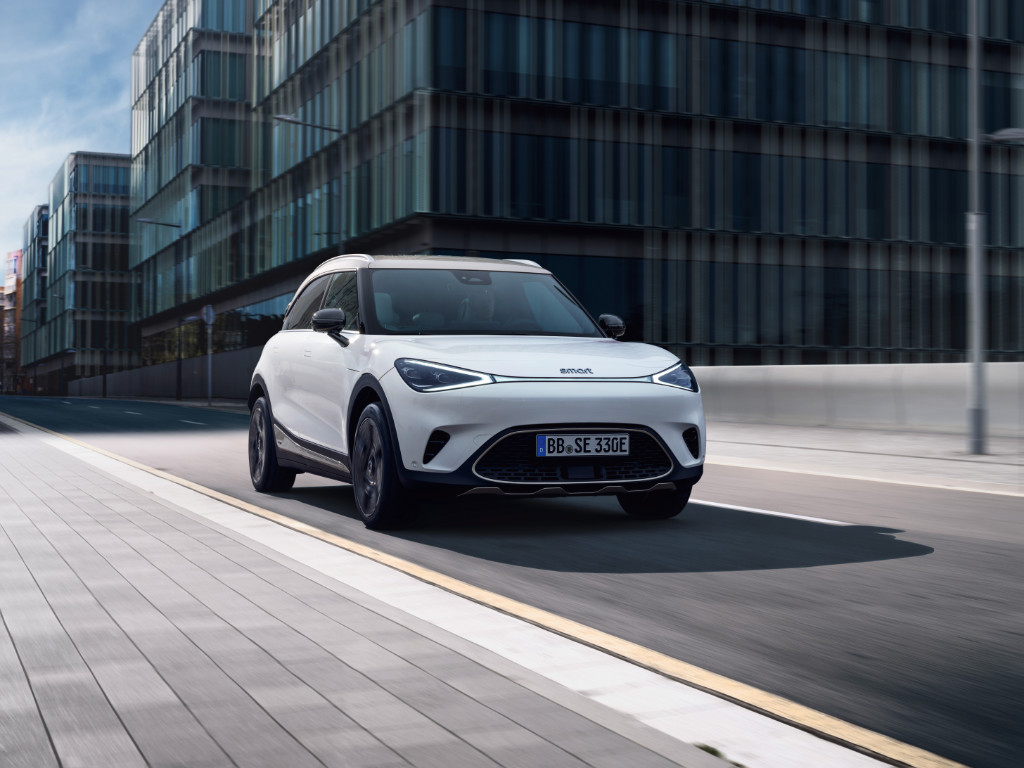 The smart fortwo and forfor may not have been kings when it came to infotainment, but with the smart #1, smart is clearly showing that this is a thing of the past. The #1 now has everything you want and much more. The center is dominated by a 12.8 " touchscreen, which is filled with content from a powerful processor (Snapdragon 8155) and remarkably modern software: Profile selection and settings that are particularly advantageous for travel: From navigation to the vehicle's air conditioning to the intuitive control of light and sound: Most of the vehicle's functions can be set and adjusted on the screen. The screen has different modes, making it the home of vehicle entertainment. Of course it is also going to support over the air updates. 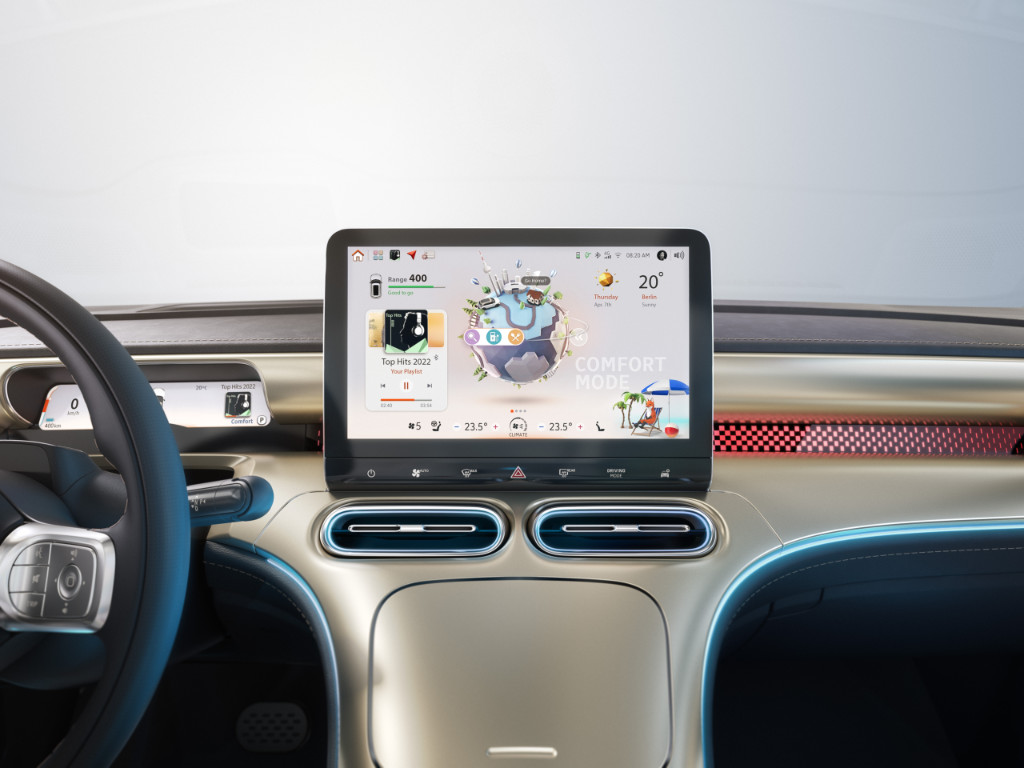 What I personally really like to see: A charging pad for the mobile phone. Not only is it so perfectly tidy, but also charged when you need it. My personal experience with Tesla's Model 3 makes me appreciate that. There are also USB ports and a cigarette lighter. 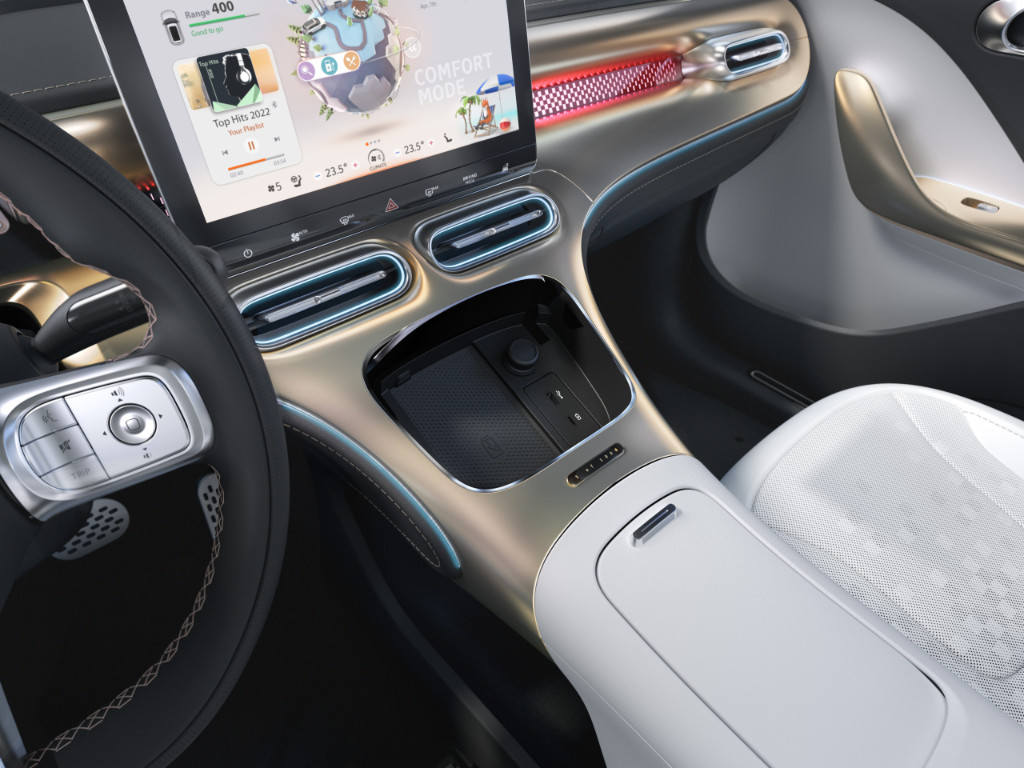 Another highlight is the 9.2" instrument cluster and the 10" Head Up Display. Two things that many miss in the Model 3 and Model Y. In addition, haptic buttons were correctly used on the steering wheel. This is how the smart #1 manages the balancing act between highly modern and practical design. 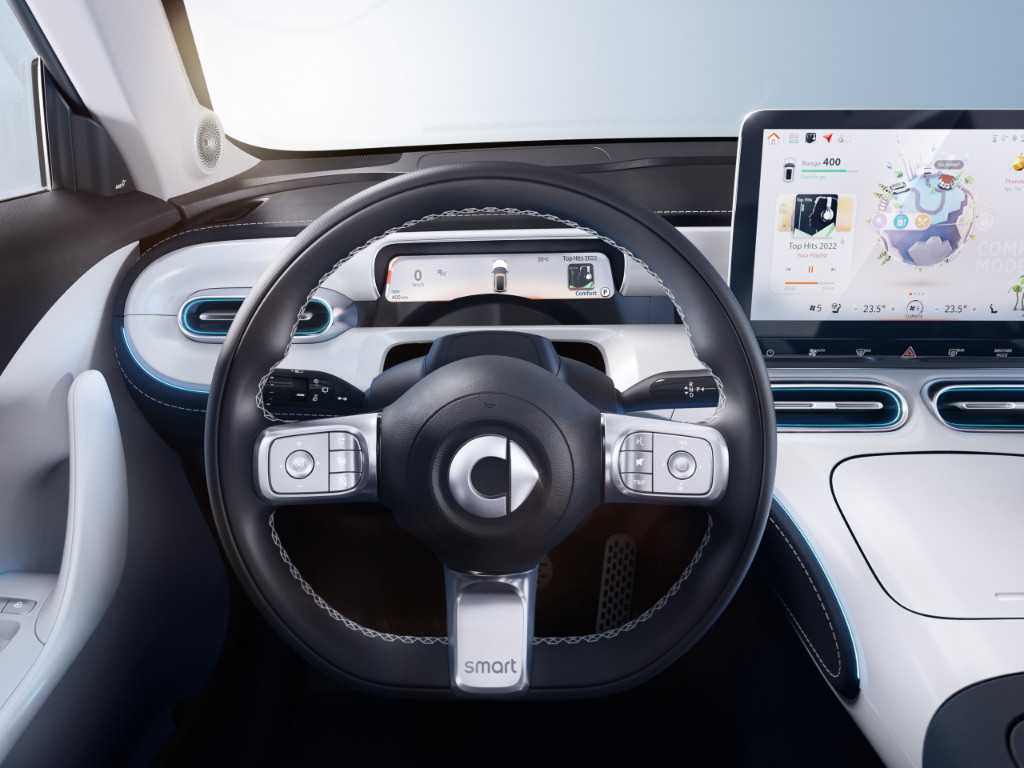 smart rounds all of this off with a promising sound system from Beats. I've already opted for the optional sound system from JBL in my current smartEQfortwo and I'm delighted with it. So I'm super happy to see, that they've got a great system in the new smart as well.

And because that should not be missing, a large trunk with a folding rear seat. Between 273 liters and 411 liters fit into the smart. Together with the maximum payload of 450 kg, it is not only a modern and beautiful car, it is also extremely suitable for everyday use. 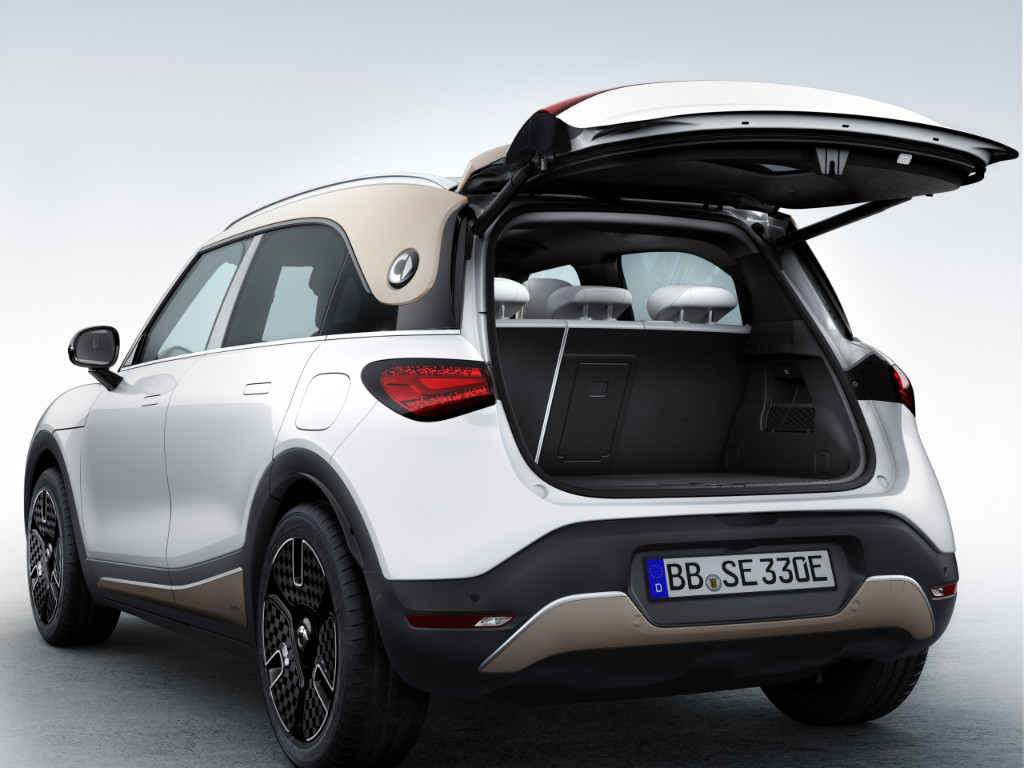 At the beginning there will be a launch edition limited to 1.000 cars with premium equipment. smart will announce what that specifically means together with the vehicle price. But what is already clear: The Launch Edition is strongly based on the gold / white design of the concept car and does not skimp on showing where it comes from inside and outside.

More on that when I've seen the smart in person. So it's worth checking out smart eMotion again soon.

In this way, the European offshoot of smart works closely with the Chinese parent company and coordinates the smart #1 for the European market. Everything related to the European approval of the smart #1, for example, is also taken care of from here. At the heart of this is of course the customer and his requirements for the smart #1.