Wouldn't it be better to swap batteries in 5 minutes instead of having to recharge them for 20 to 40 minutes?

Good question and since Nio now wants to establish exactly that in Europe, I talked to the Head of Power at Nio about this topic. In the past there have been attempts by others to do just that. Even Tesla had tried it and even had a working beta program, but couldn't get that to work either.
What makes Nio different and why do I still consider battery swapping to be a transitional technique, similar to the hybrid drive?

Swapping instead of recharging. A topic as old as e-mobility itself

It is not known who was really the first to come up with this idea. But the Mercedes-Benz LE 306, for example, was definitely early. Its battery, weighing more than 800 kg and only had a capacity of 22 kWh. Since fast charging was not technically possible at the time and these vehicles were used at the Olympic Games, the batteries were swapped. 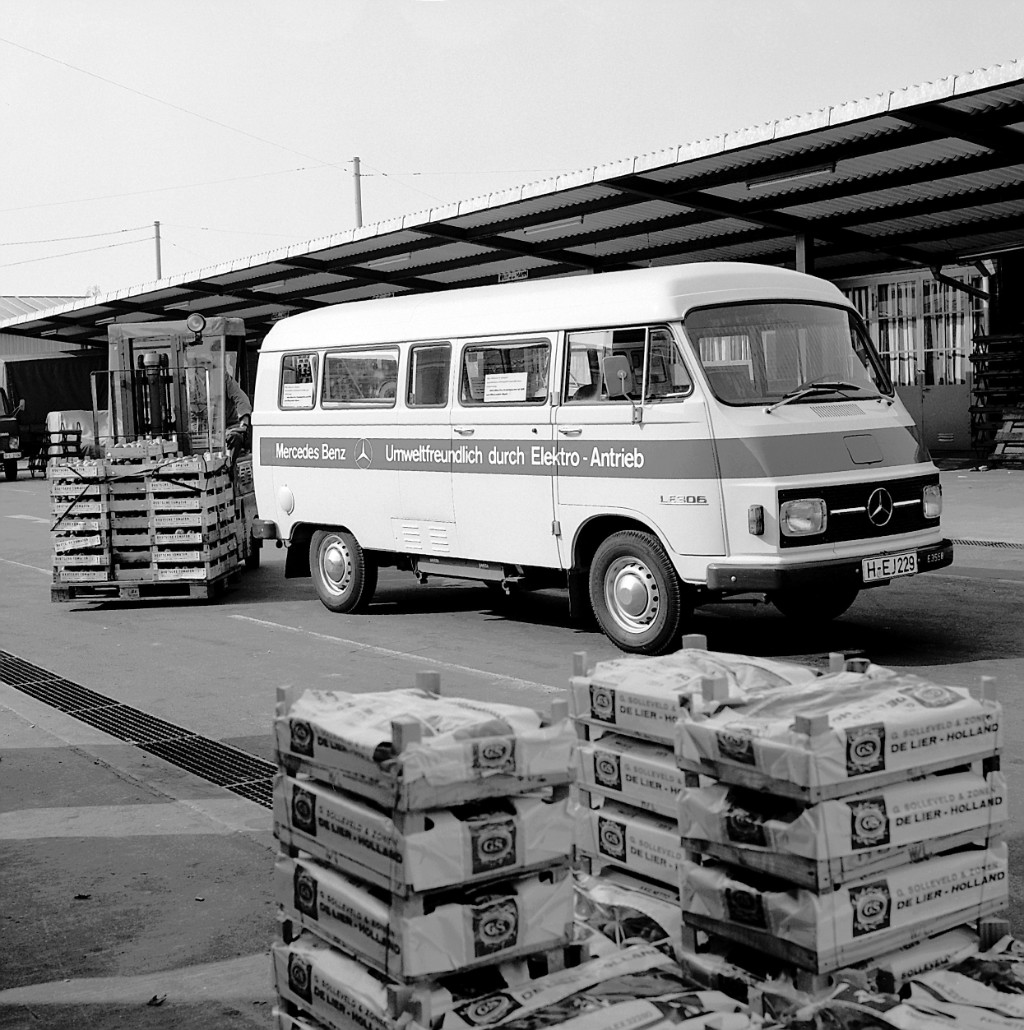 But as in all future attempts, regardless of which manufacturer and on which continent, the subject was abandoned again and again. When the smart fortwo was first designed in the late 1960s, it was also planned with a swappable battery.

In the 21st century there was the Better Place Company. They, among other things, designed the Renault Fluence with a swappable battery. But the Fluence was so focused on replacing the battery that it didn't get a quick charge function. And among other things, due to the lack of widespread swap stations, the company went bankrupt.

Even Tesla boss Elon Must tweeted in early 2013 that the Model S had been designed in such a way that the battery can be swapped faster than filling up an ICE car takes. Shortly afterwards, in a remarkable demonstration in front of an audience, he showed that Tesla can swap two batteries that quickly.

Tesla's technology actually entered the beta phase and could be used by customers. There was a swap station at the Supercharger Harris Ranch, in California. For $80, customers could swap out their battery for a charged battery, cutting charging time down from 40 minutes to around 6 minutes. However, the time saved was not worth the money for most customers, especially since the supercharger was free for all Teslas at the time. But even today, the swap would still be up to twice as expensive as regular charging. The beta program was discontinued after 18 months at the end of 2014 due to a lack of customers.

In the meantime, it had become clear that most customers prefer to charge their battery and have a coffee or walk the dog in the meantime. Especially as you can't leave the car, while the battery is being swapped.

The many hurdles of the battery replacement concept

Batteries are still installed in such a way that they can be replaced relatively quickly. But this has more to do with repair. The biggest problem is of course that there are so many different batteries. In contrast to the charging plug, with swapable batteries it is hardly possible for all manufacturers to agree on one battery. Even within the manufacturer, it is difficult to combine the entire model range into one or two batteries. Both from the dimensions of the battery, as well as from its voltage range, cell chemistry and cooling. Depending on the application, a battery has to be inexpensive, small, sporty, highly efficient or just simple. Batteries in electric cars are as individual as the vehicles and their customers themselves.

For many customers, the question also arises as to who owns the battery and whether they simply swap "their" battery for someone else's when they swap the battery. This makes many people uneasy and is also one of the the reasons why all European manufacturers no longer offer rental batteries. Tesla had solved this at the time by having to pass the same station on the way back and getting it swapped back. 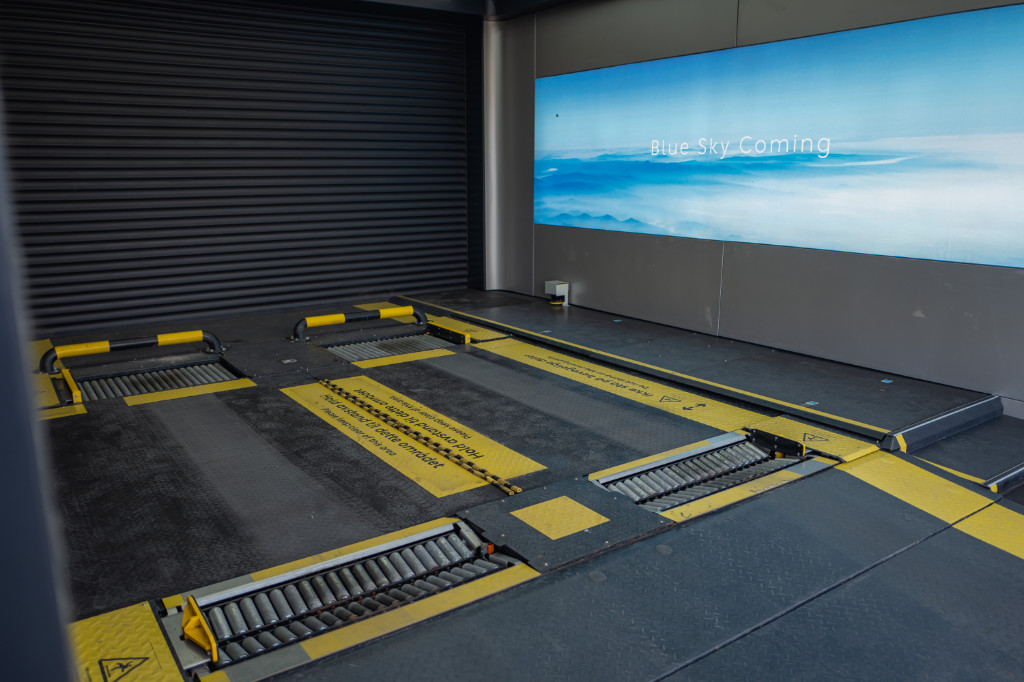 In the case of Nio in China, customers can even choose between two different batteries, one with a particularly long range and one that is cheaper. You can even switch from the small to the large for the holiday. Which makes exchange stations logistically more complex. All batteries must be available everywhere. This should then lead to trucks, which may have to redistribute batteries between the stations.

And last but not least, it is a question of price. All of the above makes the whole affair more expensive than simply charging the battery. In addition, the manufacturer has to keep a second fully charged battery available for almost every car sold. Of course in practice, manufacturers do not have twice as many batteries as cars, but definitely more than they sold cars. As a customer, you ultimately have to pay for it.

In my opinion, the question for the customer also arises as to what happens to the usefulness of the vehicle if the battery is technically too old at some point and newer batteries from the manufacturer are no longer compatible with the old car. For example, due to new crash test rules or simply due to technical progress. The appropriate swap stations and offers are unlikely to be as future-proof and backwards-compatible as a plug or a tank nozzle. In addition, replacing the battery is always a mechanical stress for all contact and screwing points in the vehicle and causes wear.

But it works, Nio has over 900 battery swap stations in China

Thankfully Gert-Jan Geerinckx, the "Head of Power" at Nio, took the time to tell me about Nio's intentions and experiences with battery swapping. At this point I would also like to say a big thanks for that.

The most important question for me was how Nio earns money on battery swapping. This is the only way to assess whether it is a thing for the future or a lighthouse project with a short lifespan. As he reports, the battery swaps at Nio are part of a larger offer. They call this "Battery as a service". The battery is not being bought by the customer, it is rented. This is already running on a large scale in China, and it has already been introduced in Norway with the first station. The Norwegian customers buy the car without a battery and then pays €146 / €209 (75 kWh / 100 kWh) per month. This includes 200 kWh per month, which can either be recharged in the classic way with up to 180 kW at Nio charging stations or be swapped in by replacing the battery. 2 battery swaps per month are free, each additional one costs about 10 €.

Nio clearly relies on battery replacement as an additional service, in addition to home and quick charging. As Mr Geerinckx told me, the target group for battery swaps is not drivers who are already driving electric. The stated goal is to motivate other combustion engine drivers to switch. For example, he sees German Autobahn drivers as a target group. Drive fast and have 100% range again extremely quickly. 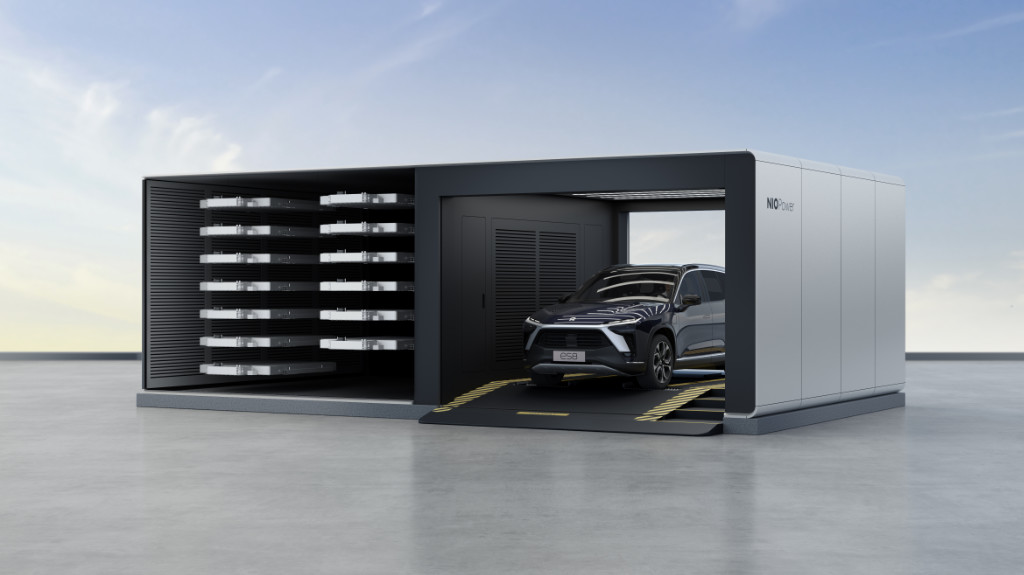 There are also no longer waiting times at the swap stations if someone has just swapped their battery for a full one. A big advantage compared to many hydrogen stations. Each Nio station has 13 batteries in stock, each swap takes about 5 minutes. With 550 kW, the grid connection of the swap station is large enough for the first battery to be fully charged again until all batteries have been replaced.

When the rush is lighter, the station can also use its batteries to balance the power grid and dynamically charge the batteries with 20kW to 80kW each. It is important to say that at the moment only charging is possible. The stations cannot deliver electricity back to the grid. Overall, these stations are significantly better for the power grid than fast charging stations.

In China, the system works with all Nio models except for their supercar. It is even the case that external manufacturers also want to take part in the future, and talks are currently being held with around 50 companies. According to Nio.

Nio definitely has an exciting concept and in my opinion the most promising one that history has seen. Still, I'm not sure there will be enough unity outside of the Chinese economy that even external brands want to get involved. And I am curious what will happen in China if the latest batteries are no longer technically compatible with older cars, some of which are already 5 years old from a technical standpoint.

I have the impression it's a feature to bind combustion engine customers to EVs and the Nio brand. Accordingly, I would not be surprised if the program were to be phased out in 5 to 10 years, as it would then no longer be necessary. As far as I can judge from the outside, the swap stations are financially not self-supporting. Both the one-time investment for an swap station and the later maintenance for all the necessary mechanics in the station itself should be significantly more expensive than the costs associated with several quick charging stations.

But in my opinion, a clever move on the part of Nio:

A conversion to a fast charging station would not be excessively complex and would still support the investments made in locations today. The swap stations have the same grid connection requirements as quick-charging stations, and the overhead of batteries could then also serve as stationary buffers for even faster charging.