So now I've had the chance to test drive the all new smart SUV. The smart #1 is already very impressive in the pre-production version and well on the way to becoming a really popular car. In this post we'll take a look at what I've experienced in 2-3 hours and why the car made me speechless.

It was important for smart to emphasize to me that the smart #1 I drove is still a pre-production vehicle. Accordingly, I prepared myself for small complications here and there. To my personal delight, however, the car is already very mature and really good even in terms of software. When I was shown around the Media System by Wolfgang Ufer, he was already pointing out a few small things that still need to be corrected. In my opinion, it is not a matter of course that the German boss knows his product in such detail and not only recognizes any improvements but also initiates them. All the little things in an already very good system. I was really happy to see that optimization was already being done at such a high level. In my opinion it is already better and easier to understand than the system of the Volkswagen Group.

At smart, they are rethinking many things. After the dealers had been trained with the vehicles in Lisbon (Portugal), the smart bosses from all over Europe drove the cars home on their own. No trucks or anything like that. Accordingly, they were able to get to grips with their product and test it out over long distances. Hat off for that, respect from me. I really like that a lot. 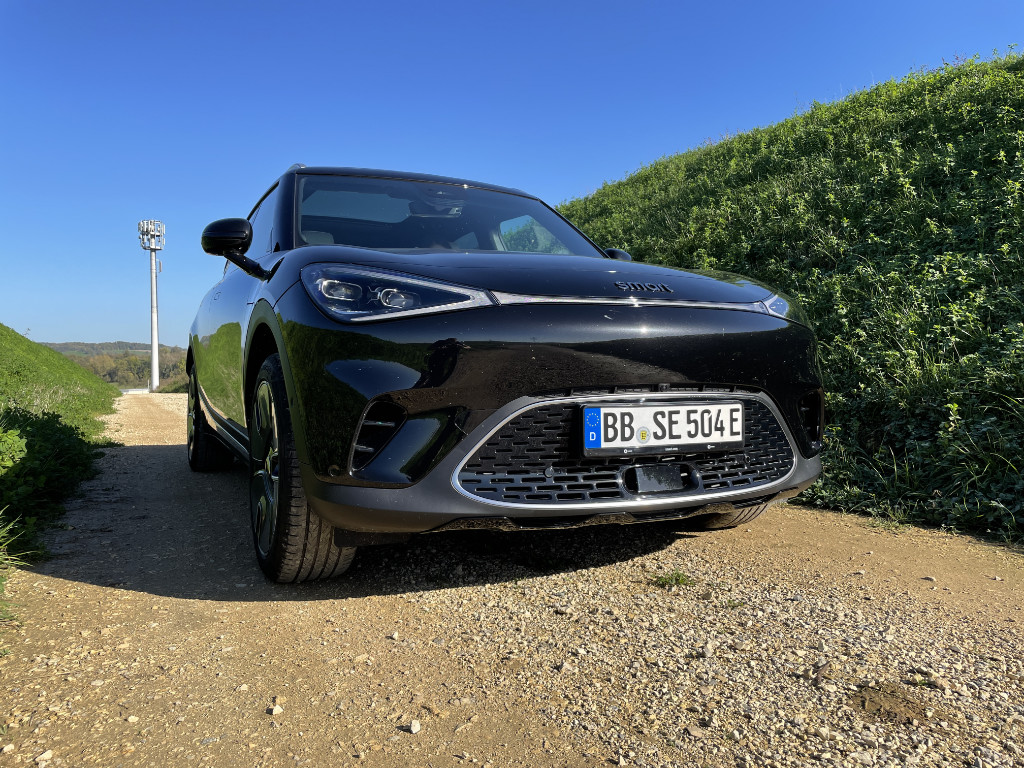 I wanted to focus on the chassis and the general driving experience during the test drive. Since you can no longer get these things under control after delivery of the first smart #1 vehicles. But the software already stood out so much that I want to go into that first. Over a year ago I wrote how premium isn't something you can only touch anymore. Something that smart seems to agree on. Before I could explore the area around Leinfelden-Echterdingen near Stuttgart with the #1, I was instructed in the vehicle and the media system by Wolfgang Ufer. There is still a small bug in the driving mode and there are a few other small things deeper in the menus, that need to be addressed. In addition, the navigation system and route planning, including charging planning, will be overhauled as well.

Despite the pre-production status, it is a very dynamic and clearly designed media system. With a quick selection for the most important things when driving. In addition, there are also haptic buttons on the steering wheel, for example, for the cruise control. You can definitely see in the interface where an iPhone or a Tesla was the inspiration. Which is a good ting, in my opinion. It's all very well integrated and very well thought out.

I didn't expect the software to be so good and mature, and I was even speechless at times over what smart implemented already. Of course it's not perfect, but it's definitely far above what some other manufacturers have and certainly claims to be able to compete with Tesla. 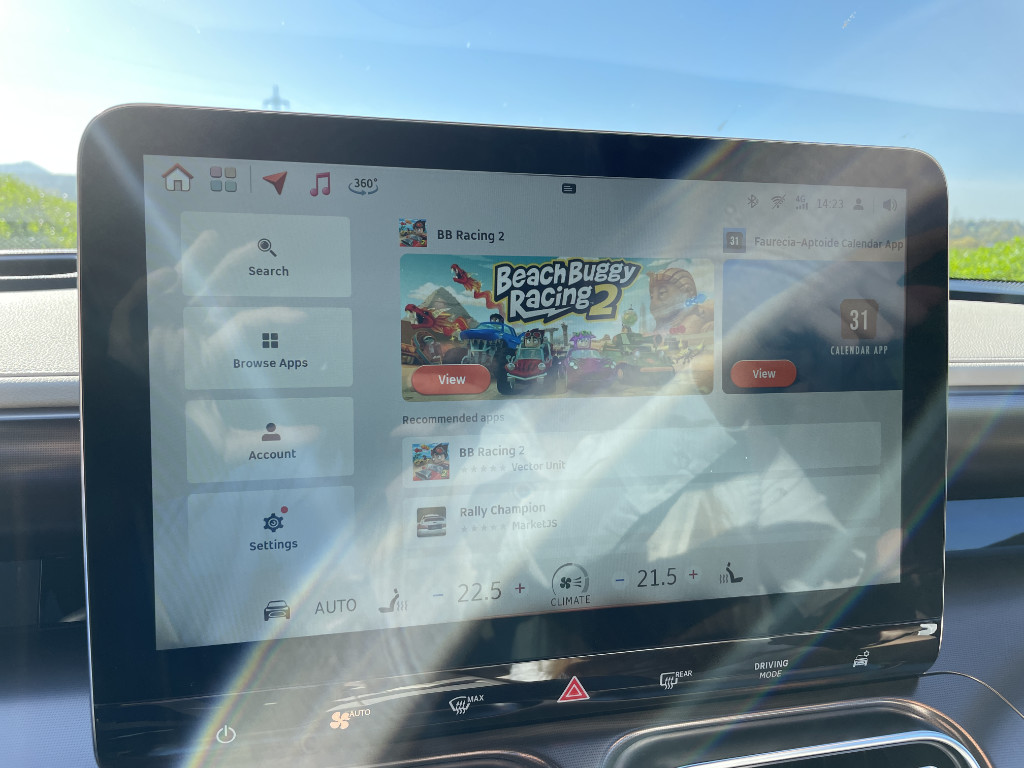 At a later date I will have to take a closer look at the software and introduce it to you. As detailed and feature-packed as it already was, I wasn't able to fully explore it. But I would still like to mention a few things: There is a separate AppStore where you can download apps, games and even Spotify. This is specially designed for the smart #1 and its media system. You can also monitor the charging process in great detail, adjust it and set a charging limit. There is also a view that shows the air quality. The voice control was also really good and also hears who in the car addresses it with "Hey smart". This way you only have to say "Open my window" and it will know where your window is.

Another big feature is the Beats sound system. Of course, you can also customize this in the software and change the center of the system in addition to highs, lows and mids. The sound from the system is quite good, although I'm personally not super deep in the audio topic. Others will certainly be able to give you this even better in their reports in the future. 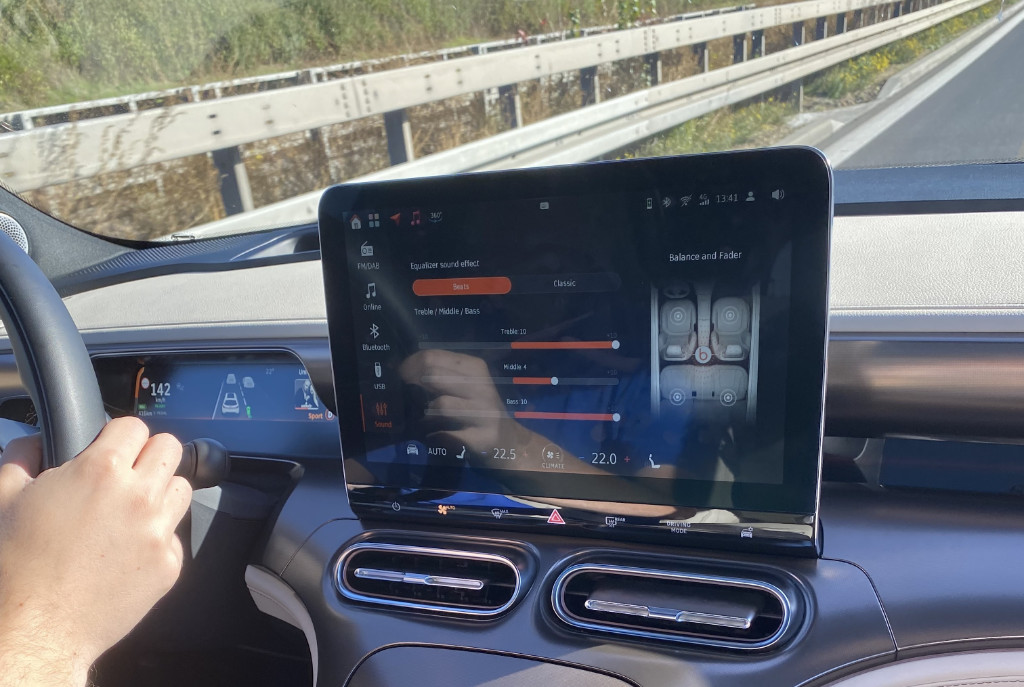 Why a fox in the corner? 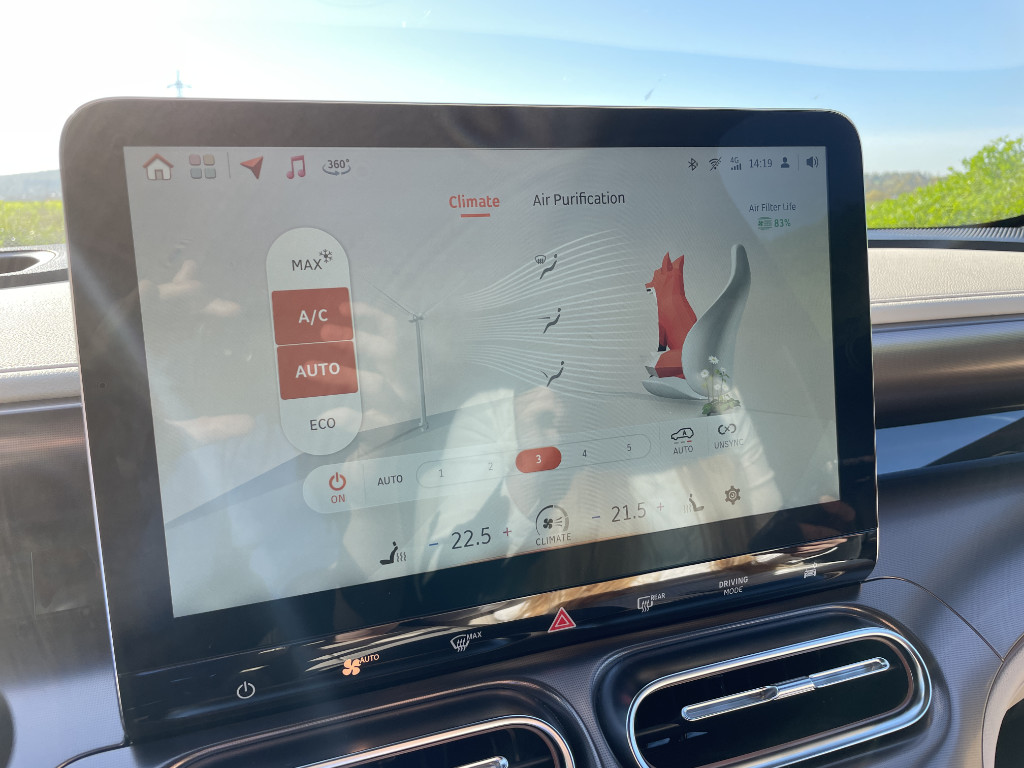 In the whole media system you'll find this fox again and again. When I was able to experience the interior and trunk at the presentation, there wasn't much to do with the fox and I wasn't sure whether it was cool or kitschy. Now I know: He is exactly right. It is your constant companion in the media system and gives the whole car a very cool character. Certainly not for everyone, but perfect for this car and its design. With future Over the Air updates, smart also wants to bring more characters, so that you can then also choose what kind of animal you want.

How does this digital spaceship drive?

Of course you notice when driving that the smart #1 is an SUV and not a sedan. Nevertheless, it is sits nice on the road and drives extremely comfortably, even at 183 km/h (according to the speedometer). It also does really well in curves, not as you'd expect from ICE SUV. The battery in the underbody certainly helps here, so that the center of gravity is as low as possible. I currently have a BMW i4 sedan here and would even say that the BMW is more cumbersome to drive than the smart. Certainly also because the smart #1, weighing 1,800 kg, is several hundred kilos lighter than the i4.

I drove with the highest level of regenerativ breaking throughout and that was hard enough for me. But what is still missing is the classic One Pedal Drive, the smart #1 regenerates very nicely and strongly, but not to a standstill. I'm hoping this will be added through an update. Also it would be cool if the smart would go in to park, when the car is standing and I open the drivers door.

We drove a smart #1 Premium, i.e. without BRABUS all-wheel drive. Already the Pro + and the Premium drive really well and quietly. The BRABUS with all-wheel drive even has a 50/50 weight distribution and should be even better on the road.

In the car was very quiet, and there was no whine from the motor or reduction gear either. All in all, a very quiet background noise, as long as you don't stress the beat sound system, of course.

Don't the displays obstruct the view?

The central display, the speedometer and the head-up display are also very nicely coordinated. These nestle wonderfully into the car, information can be taken from them immediately without getting in the way or even obstructing the view. Of course, the head-up display and the already well-functioning sign recognition are particularly nice. Two features that the Tesla Model Y does not have.

In the photo, the head-up display looks a bit too small, but that's deceptive. It's spot on and very visible without being too big or even distracting. And since the speedometer has a rather small display, the things displayed there are presented large on the one hand and very clearly and simple presented on the other. Perfect for seeing the important information at a glance and just the way I like it. 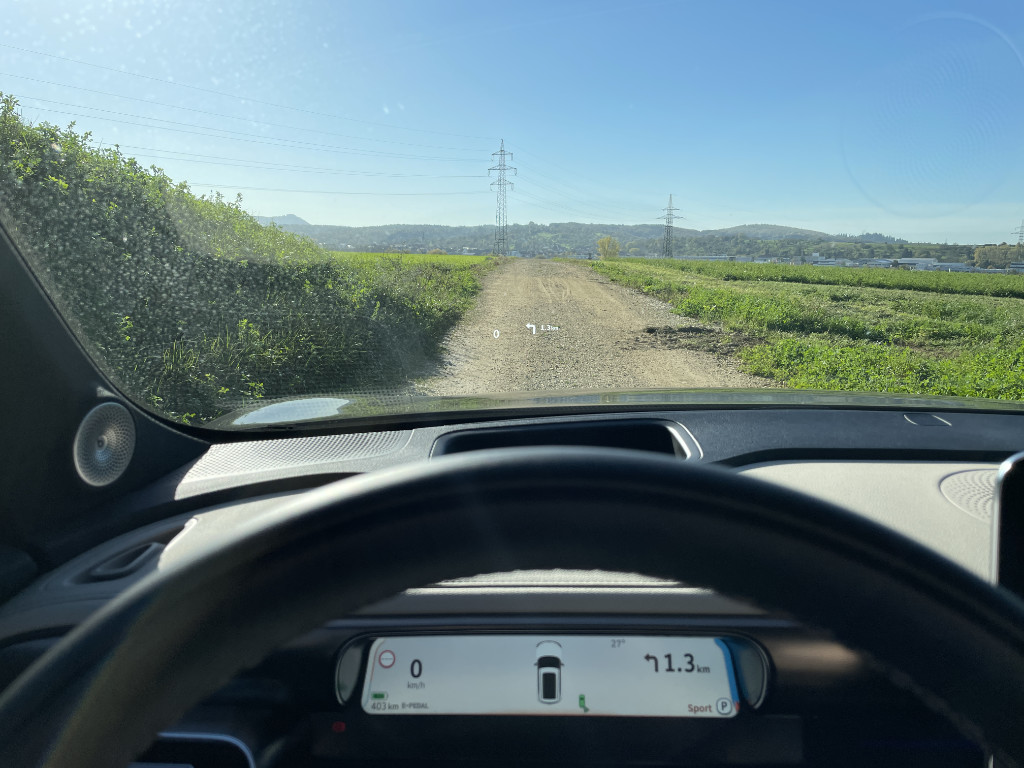 In my day-to-day work, I now drive my parents' Model 3 quite regularly throughout southern Germany and really appreciate its software and the simple interior. After the test drive with the #1, I can hardly wait to integrate it into my everyday work. It is even more comfortable and has a few more features than the Model 3. Thanks to the 360° camera, it literally shrinks around you and is super easy to maneuver through narrow streets. 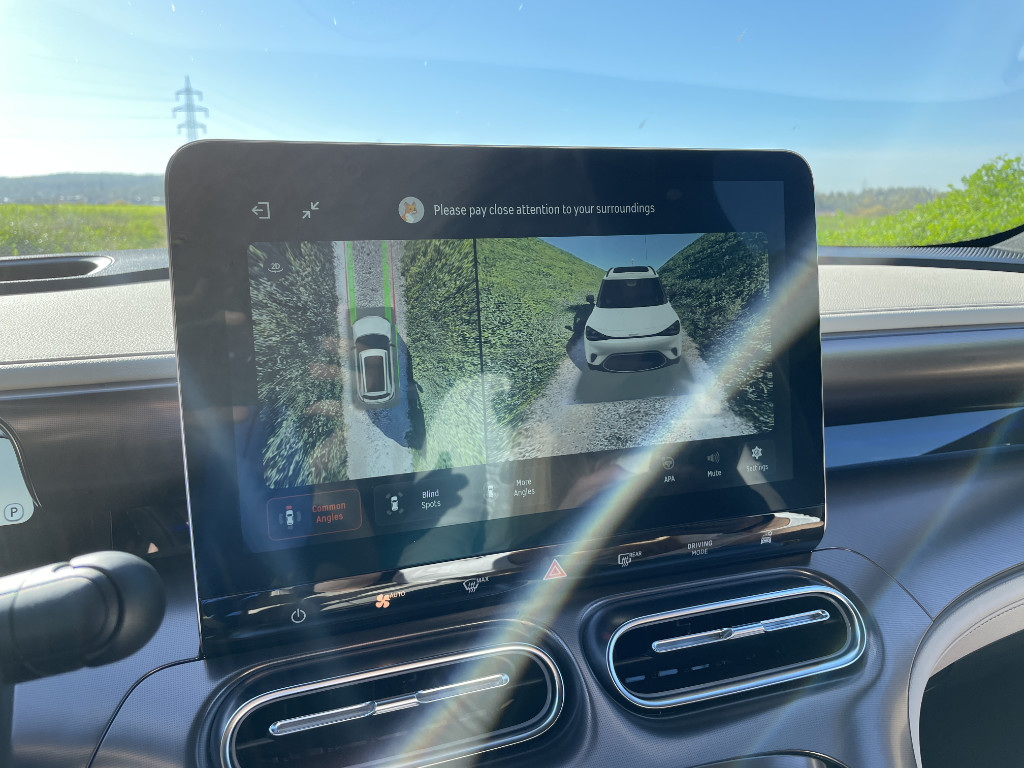 In fact, here are the only two current points of criticism that I personally noticed. The media system does not know what color the car is and therefore shows a white car throughout the system. Here I would like it to look like the car and maybe even be customizable, if you have wrapped the car, for example.

You can also rotate the camera around the car in the 360° view so you can look at everything. It still runs a bit jerkily, maybe with a little optimization in the software you can get it as smooth as the rest of the media system up to the series.

Personally, I really appreciate it when a car doesn't take itself too seriously and also has playful and unnecessary details. It's just fun and gives the whole thing character. For example, there are small pictograms from the smart #1 around the edges of the windshield. 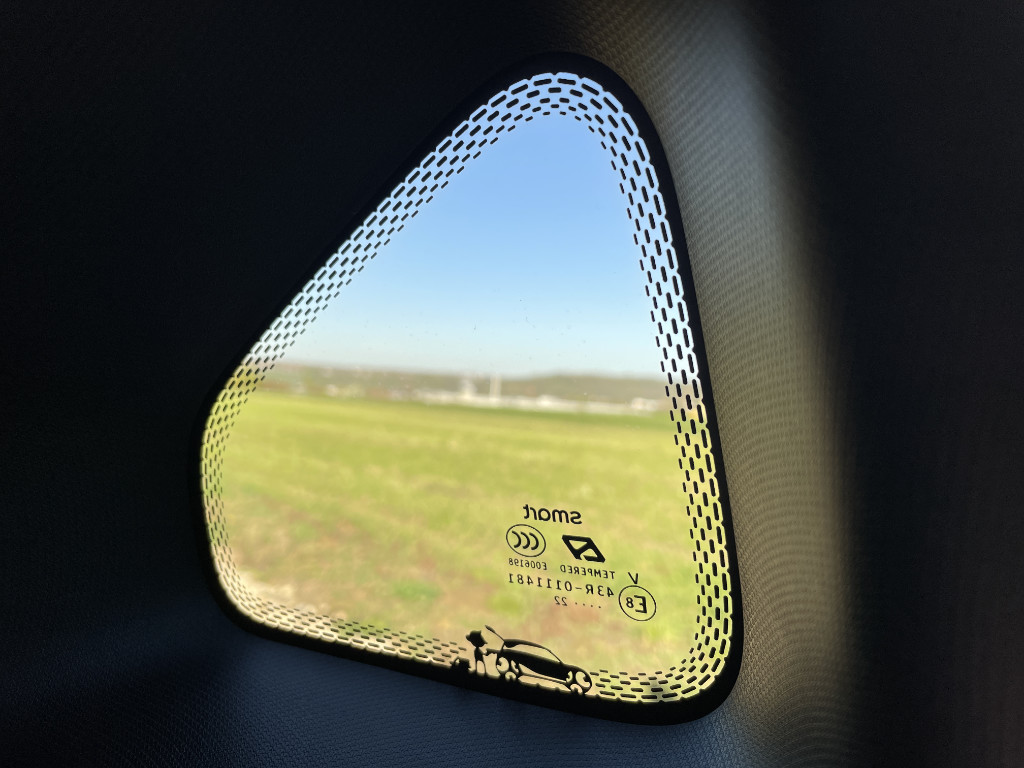 And another great detail is the cooling compartment in the center console. Perfect for a six pack of apple juice and because it's in the perfect position, also with space for a charging card. It's actually not much, but I think it's super practical and I'm looking forward to having something like this in everyday life. 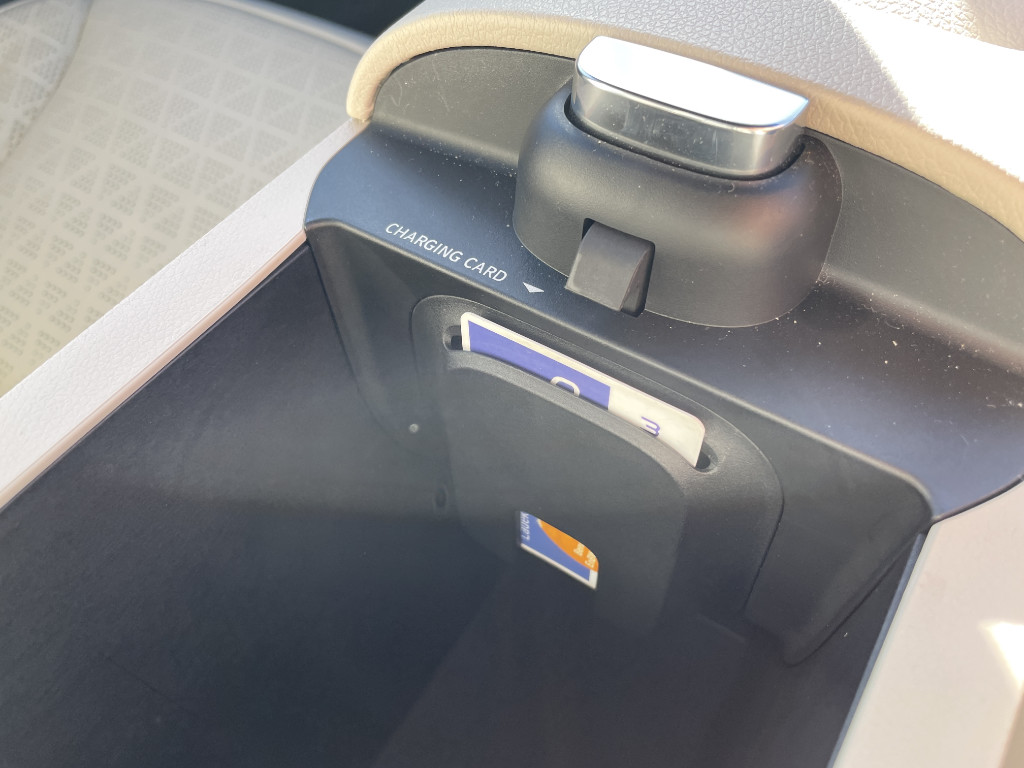 The smart #1 is already very mature almost 3 months before the delivery of the first vehicles and drives very well. The media system is really fluid and nicely laid out. With a 66 kWh battery, CCS 150 kW and 22 kW via type 2, it is also extremely suitable for long distances. With our combination of overland, highway, standing around a bit on the dirt road to take photos and a lot of driving fun, we had a consumption of 17.5 kWh per 100 km. Which gives it a realistic 370km range. We couldn't test the charging curve, but I've already seen it and it's pretty tight. The smart #1 can easily do 10-80% in under 30 minutes.

Together with the base price of 41,490 € and a great equipment across the board, the smart #1 is well on the way to becoming a bestseller. I'm really looking forward to it a lot. 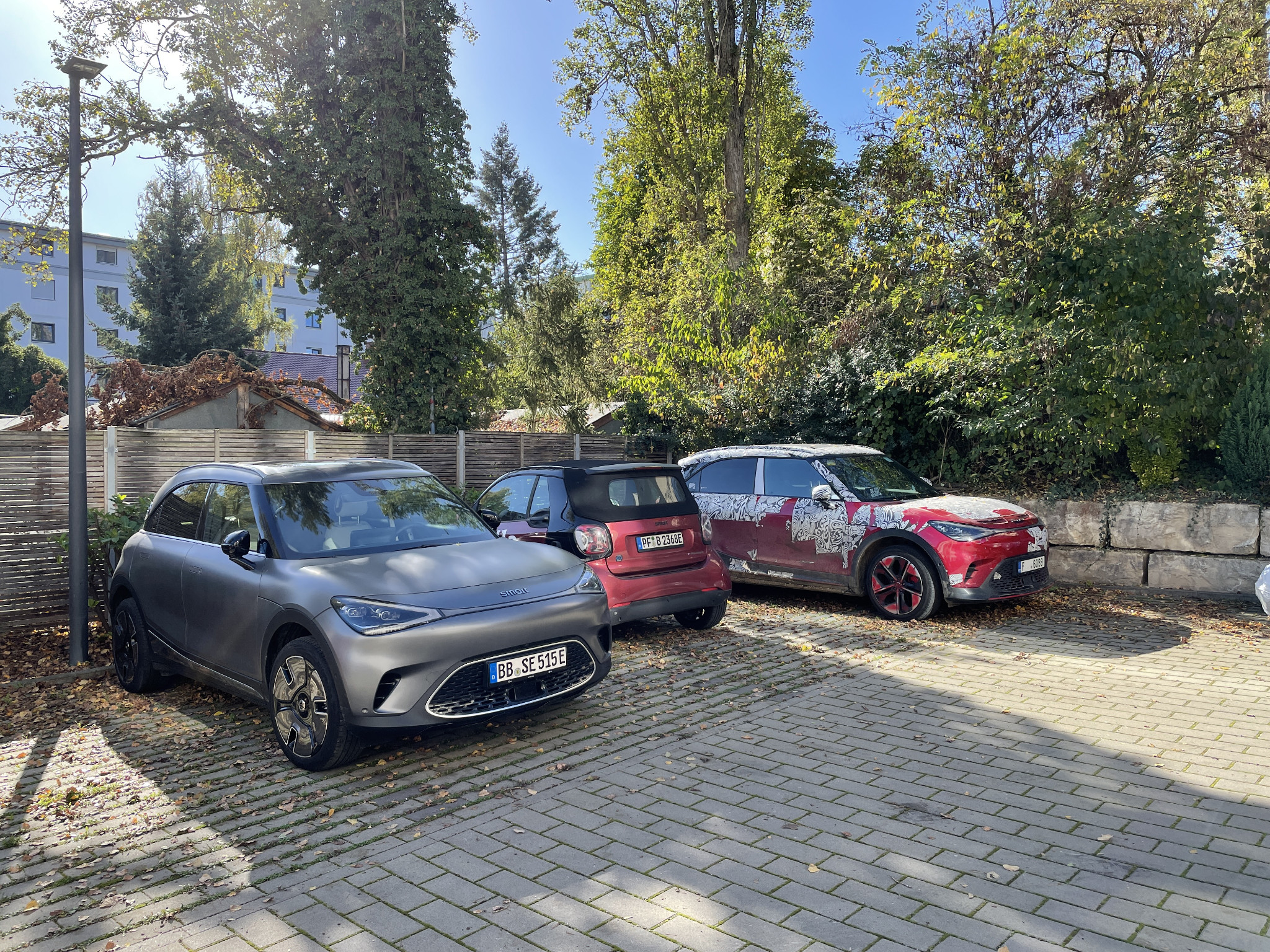