I'm still being asked why you should buy an expensive wall box when the same thing is also available as a cheaper solution in the form of a charging brick. However, I strongly advise against this, not only from personal experience. Nowadays, mainly due to a variety of experiences from my readers and things that I have already seen over time.
Charging bricks are not called emergency charging cables for nothing and should therefore not be used as a permanent charging solution. They are not designed for this and sooner or later, in the best case, "just" something will break, in the worst case even burst into flames. This saves no money.

In this article I answer all the common questions and myths that I have come across on the subject over the past few years. At the end I will also give you a safe and inexpensive recommendation.

We have been active in electromobility since or 2013 smart ED and back then wall boxes were still extremely expensive devices. So expensive that even charging bricks cost €600. That's why we used to charge the smart exclusively with the enclosed charging brick. We too thought that was a good idea and that we knew what we were doing.

But it was this experience, which made us switch to a sensible solution with a wall box in 2015. No money is saved with household sockets. Ultimately, this action cost us more than it originally saved. This also clearly showed that charging bricks are only emergency charging cables. They are designed for infrequent use and to be rechecked before each charge and then plugged into the outlet.

Why not using charging bricks?

The biggest problem with emergency charging cables is the wall socket, in Europa mostly Schuko, itself and the risks involved. It is not designed for high continuous power. While it's true that it can handle 16A, that's just the maximum amperage. Or to put it another way: the socket can withstand this load for a very short moment, but not permanently. For example, if you switch on an electrical device with a very high power, this is still okay. But not permanently. So supplying 16 A over a longer period of time, as is the case when charging electric cars, is not possible with the Schuko. A maximum of 10 A is possible, in rare cases maybe 12 A. I advise against the latter and even 10 A can be too much. Even if you buy and use a "particularly strong" or "specially designed for electric cars" socket.

This brings me to the second point against the Schuko plug: In contrast to camping plugs, high-voltage current plugs and other types of plugs that are designed for higher continuous power, Schuko has no locking mechanism. Over time, the Schuko plug can slowly slip out of the socket or sit slightly crooked in it, so that the contact surface between the socket and the plug becomes smaller and smaller. This results in an increasing electrical resistance between the socket and the plug and causes them to get hot during operation. I've even seen plugs, which then "welded" in to the socket.

In addition, Schuko is also quickly unplugged by an unsuspecting child. In the best case, the car is simply not full, in the worst case, the child puts itself in danger.

Emergency charging cables are not called emergency charging cables for nothing. Aside from the risks, they are also not an inexpensive, but a cheap alternative to the Wallbx. They are for emergencies or the spontaneous opportunity to charge a bit somewhere. Accordingly, they are not designed for high cycle numbers. If you use them not just a few times a year, but multiple times a week, the cheap components they're made of will die rather quick. So every few weeks I have a reader whose emergency charging cable broke and now has to be replaced. On the other hand, I have practically no complaints about defective wall boxes. The built-in relays in particular, but even microcontrollers on the circuit boards themselves, die prematurely and turn the entire cable into expensive electronic waste. 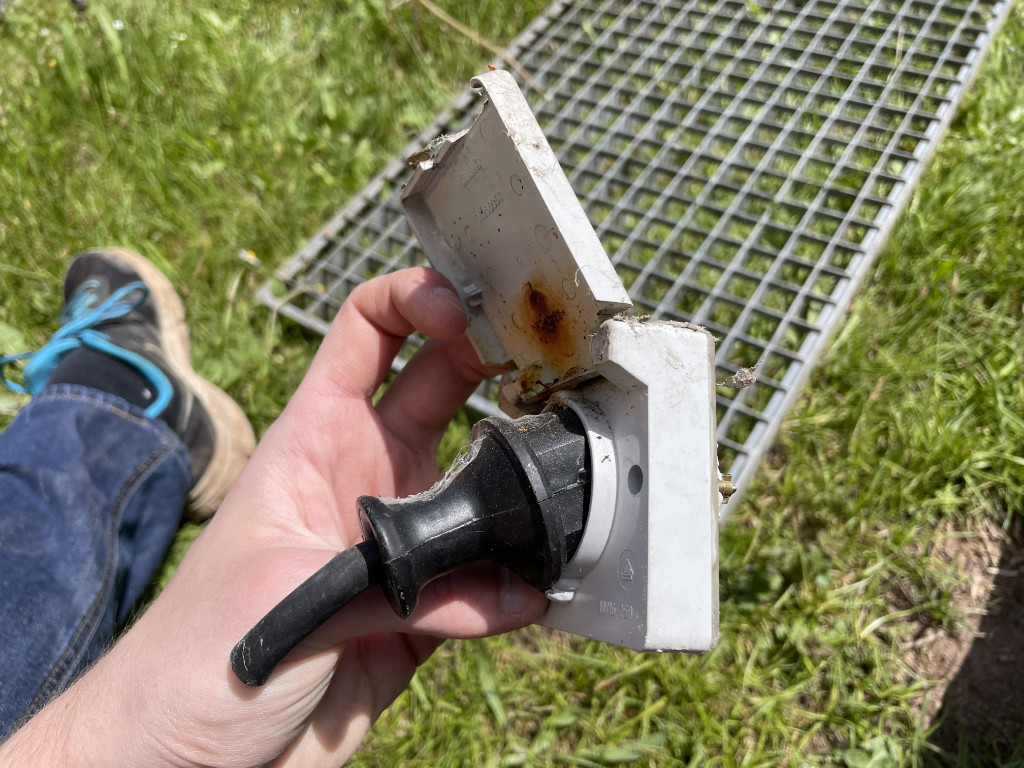 Since 2018, type 1 and type 2 emergency charging cables must have a temperature sensor in the wall plug. But the cheap ones from overseas don't have exactly this sensor. But even if the emergency charging cable of choice had one, you would still be standing in front of an empty car one morning because the temperature sensor had tripped and the charging process had been interrupted.

Due to the lack of temperature sensors, I also advise against emergency charging cables on ebay, Amazon and Aliexpress, as well as other sites of this kind. Even for emergency charging, I would recommend high-quality cables from Mennekes, Dinitech (NRGkick) or Juice Technology AG (JuiceBooster). I will go into the go-e Charger again separately in the conclusion below. It also doesn't have a temp sensor.

Emergency charging cables, if you need one, are better used without a Schuko socket if possible, or at least in such a way that the weight of the cable is somehow taken off the Schuko socket. That this is mechanically relieved and the plug cannot slowly slip out. Although even the relief is no guarantee that it will not simmer at some point. I would strongly recommend plugging in the Schuko plug in again for each individual charging process. This way, you can give it a quick visual check, make sure it's in place, and reduce further hazards.

Incidentally, Schuko is a colloquial abbreviation for protective contact and refers to the CEE 7/4 plug and the CEE 7/3 socket that are widespread in Europe. Schuko itself is a protected name. Charging bricks and emergency charging cables are also colloquial, the official designation is ICCB, which stands for "In-Cable Control Box".

Although you charge relatively slowly on Schuko, you usually use thin leads. This brings a relatively large amount of inefficiency into play and in order not to increase this even further, practically every emergency charging cable manufacturer prohibits lengthening with extension cables. Further inefficiency comes from the fact that chargers in cars are designed for significantly higher outputs and therefore do not shine with efficiency at the bottom anyway. Depending on the manufacturer and model, this can make big differences.

Another factor is that super-slow charging keeps the car's pumps, electronics and controllers running many times longer for the same amount of miles. So you protect the Schuko socket with extremely slow charging, but effectively only transfers the wear and tear to the car. Which is ultimately even more expensive than a charred socket or even a defective emergency charging cable. 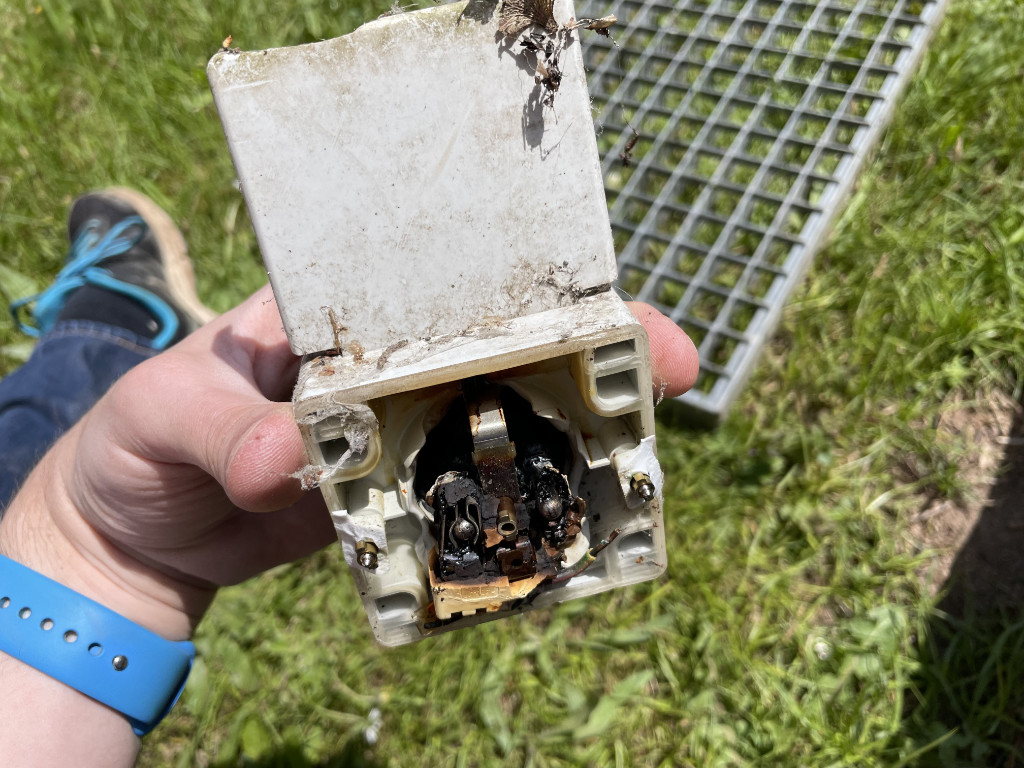 According to the electrician, installing a wall box is very expensive for me,

but I only have to plug in the charging brick

Basically, it is important to clarify: Where you can connect an emergency charging cable, you can also connect a wall box.

Every wall box, without exception, can simply be connected to 1-phase and most of them can also be throttled to the 10 A of an emergency charging cable. So you can simply remove the Schuko socket and connect the wall box to 230 V there. If the wall box does not have an integrated circuit breaker, you still have to retrofit one in the fuse box. In terms of costs, this effort is absolutely within the limits. In fact, in Europe I recommend buying a 3-phase (11 kW to 22 kW) wallbox instead of a 1-phase (3.7 kW to 7.2 kW) even if you only want to operate it as 1-phase at first. Because the price difference is practically non-existent. If you want more power in the future, you only have to have the supply line replaced and you can continue to use the old wall box.

When we started with electromobility, wall boxes were still very expensive devices that were practically hand-made from the factory. Today, these are mass-produced products, which are sometimes available in hardware stores or electronics stores at prices that are well below €500. It no longer makes sense to use a cheap emergency charging cables.

You don't have to redo half the house installation just because the electrician thinks he has to lay high-voltage cables for 11 kW or even 22 kW right away. You can already operate a wall box with the existing wall socket line and then limit it to 2.4 kW or even up to 3.6 kW, depending on the cable thickens and length of the supply line. This gives you the safety and convenience benefits of a wall box with the cost-efficiency of an emergency charging cable.

This brings us to my recommended course of action: The very minimum is to replace the wall socket with a socket with a camping plug (16 A CEE blue) and to use an appropriate cable. So the greatest danger is averted and a smoldering or burning socket is excluded.

If you are willing to experiment, you can try a NoName cable, which then at least does not cause much damage, although I would personally buy cables directly from well-known manufacturers. If you buy cheap, you buy twice. But you can also fall back on used ones, but you should definitely make sure not to use any products from outside Europe.

At this point I would also like to go back to the go-e charger from go-e GmbH. Although this can hardly be surpassed in terms of price/performance at first glance, it is not recommended at second glance, even though it enjoys great popularity here in Germany. Mathias Dalheimer from ladefragen.de published a wonderful (German) article that clearly shows the weaknesses of the go-e Charger and very few of them have been remedied with the new generation. Feel free to translate it with the help of your browser.

The go-e Charger scratches the edge of the certification minimum in Europe. It can only keep its price due to unsportsmanlike savings and I always have readers who complain about quality defects and complete failures.

In the medium term you should replace your emergency charging cable with a wall box. It doesn't matter whether it's a mobile wall box, like the NRGkick or the JuiceBooster, or a fixed box, like the Heidelberger, the Tesla box or the Home Plus from Vestel. The main thing is not to make the emergency charging cable a permanent solution, as it is simply not ment for this. At most for the short transition, until the permanent solution is ready. A used but good wall box can also be good option.

As a Norwegian reader has confirmed, wall socket charging has been banned as a permanent solution in Norway since July 2022. Existing systems may continue to do so and in actual emergencies it is also legitimate. But new installations are no longer allowed to be set up and there are also clear requirements for the existing ones.