The 4th generation smart electric drive is based heavily on the Renault Zoe and that's why we had to wait a year until the 22kW charger became available. What took them so long was optimizing it to German standards.

But why the effort?

Now let's see what the optimizations brought us. I've tested a Zoe as baseline and a 3rd gen smart electric drive to show what a conventional charger can do. Both smarties have the 22kW charger, the Zoe is also equipped with a 22kW charger. 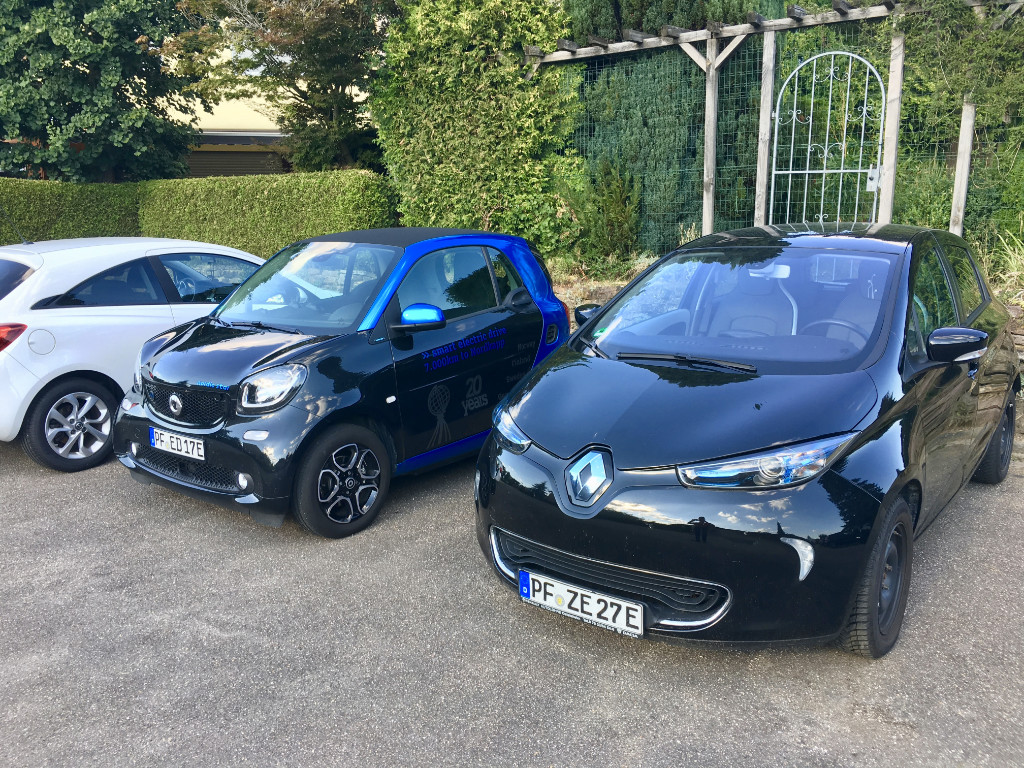 Thanks to all supporters:

I would like to mention Marcus Zacher from the blog Generation Strom, Ralf Wagner (electrical engineer) from elweb.info and MyLab-odyssey, In addition, the members of ElectrifyBW.

MyLab-odyssey is the creator of the tools used to read out the three cars. Ralf Wagner has contributed measuring devices and know-how and Marcus Zacher brought his smart ED3 with 22kW charger and further know-how.

But why the effort?

The smart ED3 had a very expensive, but damn good 22kW charger by Brusa. Still impressive in 2019, not only by its small design, but also by its high reliability. The 11kW-chargers by Tesla, they used back then, are as big, as die 22kW-charger by Brusa. When the smart hit the market in 2013, it was one of the two available electric cars that could offer such high AC charging power.

The chameleon charger is an AC charger that, as the saying goes, "charges with the motor". There is no sewable charger installed, for the most parts they just use parts that are already installed in a electric car. The so-called chameleon charger is based on a clever principle which makes it extremely attractive in terms of price / performance.

Unfortunately, the chameleon charger is also relatively vulnerable. The result is that it's a bit choosy when charging. It can not take a "risk", as soon as something is not 100% okay, it does not charge, otherwise it could risk components like the motor, the inverter and even the battery.

As smart was already cooperating with Renault for the gasoline version, they decided to do the same for the electric smart. After the first measurements and analyzes it was clear, that's not as good as it needs to be in a Daimler. It had to be fixed first and so they went on fixing that bevore bringing the 22kW charger for sale.

The most important: Did they get it fixed? Still as choosy as the Zoe?

No, thank god it's not. It checks extremely precisely the power supply and therefore charges as reliably as the smart ED3. No comparison to the Renault Zoe.

The following analysis is very technical and concerns things that enthusiasts like me are worried about. These are by no means things you would have to know as a normal motorist. Comparable to people who study the compression pressure of their ICE cars.

At the AC side I used my NRGkick to set amp for amp, 1-phase and 3-phase to document everything. Between NRGkick and 32A three-phase walloutlet was also an electricity meter as well as Ralf's gauges to see more network perturbations. What was going on in the vehicles we checked via CAN bus with the ED_BMSdiag tool or the ED4scan tool.

When it comes to 3-phase charging smart ED4 and Zoe are quite close in terms of efficiency. The Brusa charger of the smart ED3, on the other hand, is more efficient, especially when charging quite slow. 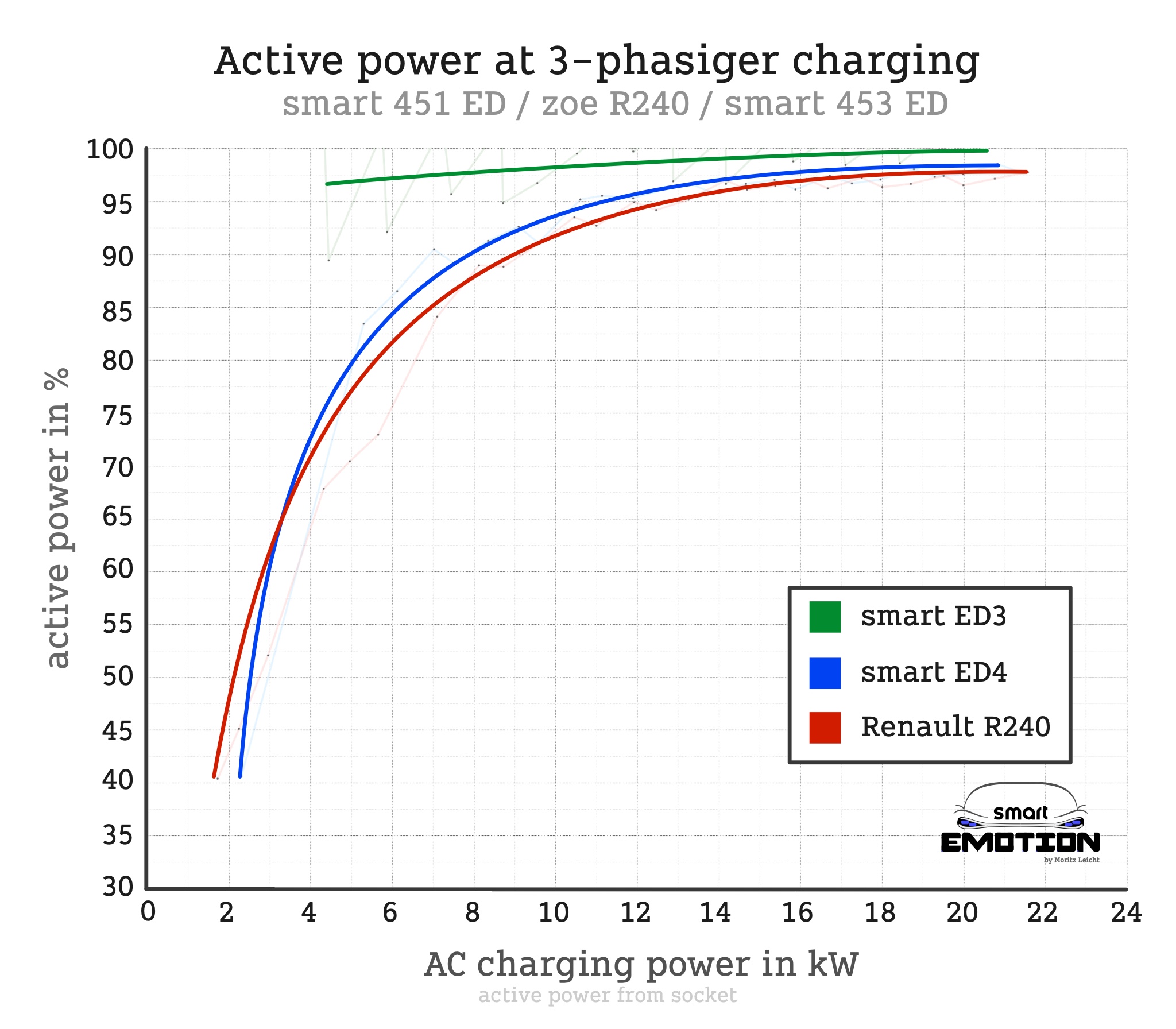 This is where the first strengths of the smart ED4 came to light. Still no efficiency miracle, but much better than the Renault Zoe. Straight out, the smart ED4 charges much more efficiently. A big improvement because that means you no longer have such huge losses charging at a usual 220V socket.

Nevertheless, the Brusa charger in the smart ED3 is in a league of its own. What also stands out, smart has limited the ED3 fast charger 1-phase to 16A*, but not the 22kW-charger in the ED4.

* This prevents unbalanced load, something that's not allowed in Germany. Otherwise it would just go up to 32A. It's only a software limit by smart. 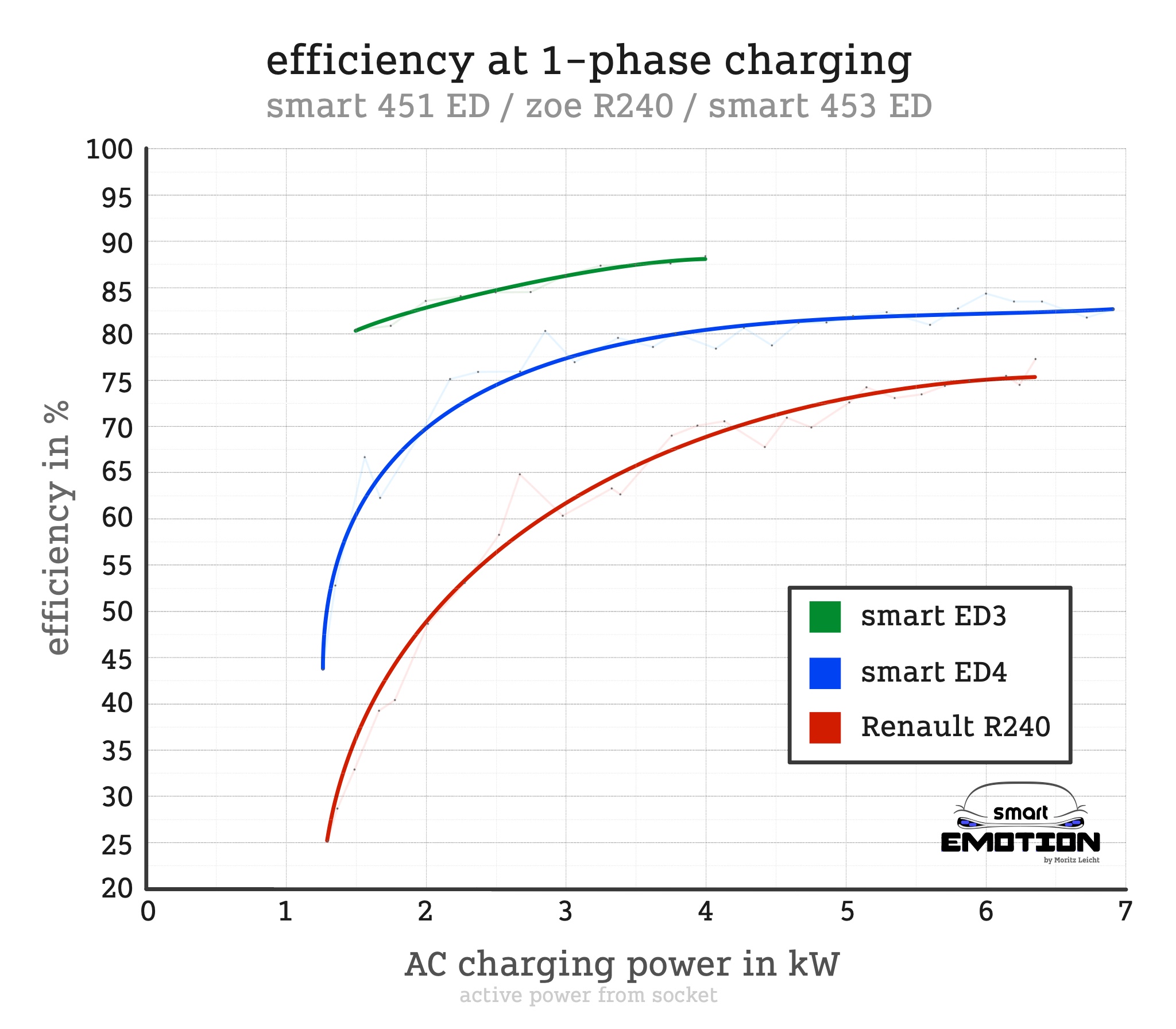 The active power created while charging with 1-phase is not very good for the smart ED4 and the Zoe, but at least still within the laws. As we are used to by now, the smart ED3 is way better than the Zoe and the smart ED4. 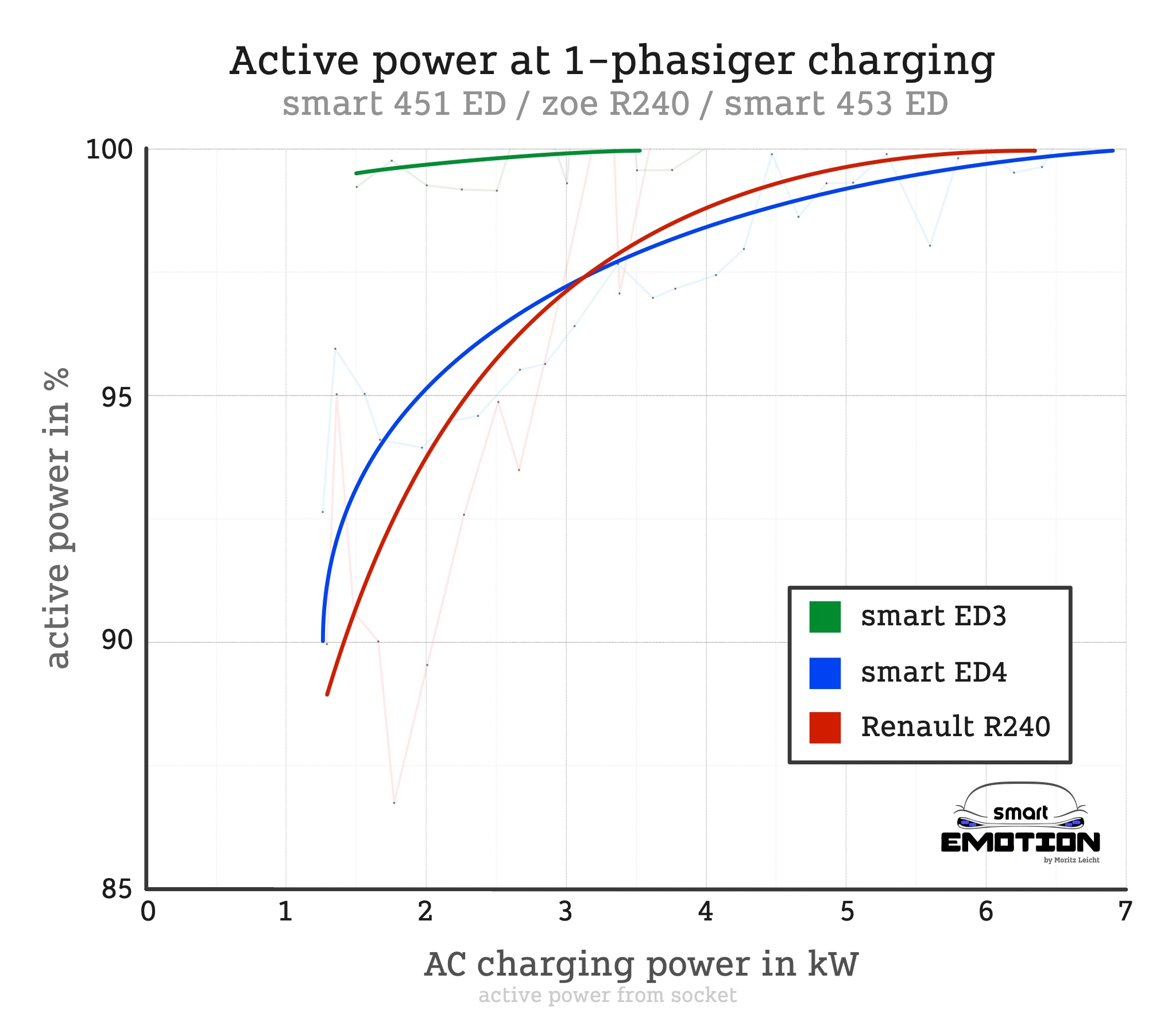 The active power created while 3-phase charging is not at all a strength of the Zoe and the smart ED4. Absurdly high amounts of reactive power are produced here. So much that close to nothing feeds in the battery when you charge with not enough current. Of course, the smart ED3 is back at the top and hardly generates any reactive power, even when charging quiet slow.

Final conclusion to real power and network feedback in general

As it turned out later, the active power generated by the smart ED4 and the Renault Zoe is not only depend on how high the current is set while charging. It also depends on the voltage applied. In the active performance statistics shown, all cars were checked under the same conditions within a narrow time frame one after the other. The results are therefore good to compare, but no absolute values.

We also measured the individual frequencies to see how the whole reactive power in harmonics looks like. Basically, all the limits that exist in Germany are for "devices" and not specifically for cars. Accordingly, there are no statistics on the harmonics here. But what to saw was that the smart ED4, in comparison to Zoe, was better and should be good with the usual standards.

Unfortunately, this is also a possibility that exists when the ED4 is equipped with a 22 kW charger. Rarely, but it can happen. The Zoe and the Twingo have always suffered from it, and unfortunately the smart too. A simple solution can be to reduce the charging capacity of the wallbox. This way the whistling in the house can go away. However, if this is not an option or is not sufficient, a line reactor must be used. In the past, readers have had success with, for example, the RWK3044-48-92-E0XXX from Schaffner.

Smart was able to improve the 22kW charger and achieve a lot in terms of network compliance. All in all, the 22kW charger of the smart ED4 is not perfect all round, but got better than the Zoe's version.

The Brusa charger of the Smart ED3 has shown how good a "true" charger can be and I still think that's the way to go for AC charging. But still, smart hast got the charger in the ED4 got to work as good as you need. I'm taking my smart ED4 rather than my parents Renault Zoe.