After the 1st generation (2006) of the electric smart was based on technology that was 10 years old, smart urgently needed external help. The choice fell on the then still very young Tesla startup. Today it is common knowledge that Tesla developed the 2nd generation (2009-2012) of the smart electric drive for Mercedes. What is less known, however, is that it was heavily based on the original Tesla Roadster. The first prototype of the smart ED2 's electronics even thought it's a Tesla roadster and had all its components. Including the roadster-specific on-board computer, display and 248 hp rear-wheel drive motor.

Reason enough to take a closer look at the original Tesla Roadster and its interesting history. Because not only smart as we know it today is based on his shoulders, but also the entire Tesla company. In this article I would like to bring you closer to the Roadster and therefore I spoke to David Lyons. He was Tesla employee number 12 and worked at Tesla from 2004 to 2008 as Director of Engineering for everything to do with the roadster's powertrain.

Hughe thanks to David Lyons

David Lyons (Linkedin) took the time to tell me about his time at Tesla. He told me what the biggest hurdles were back then and what the times was like. It was a super exciting conversation and I am very grateful to him for making it possible despite the time zones between Germany and California. 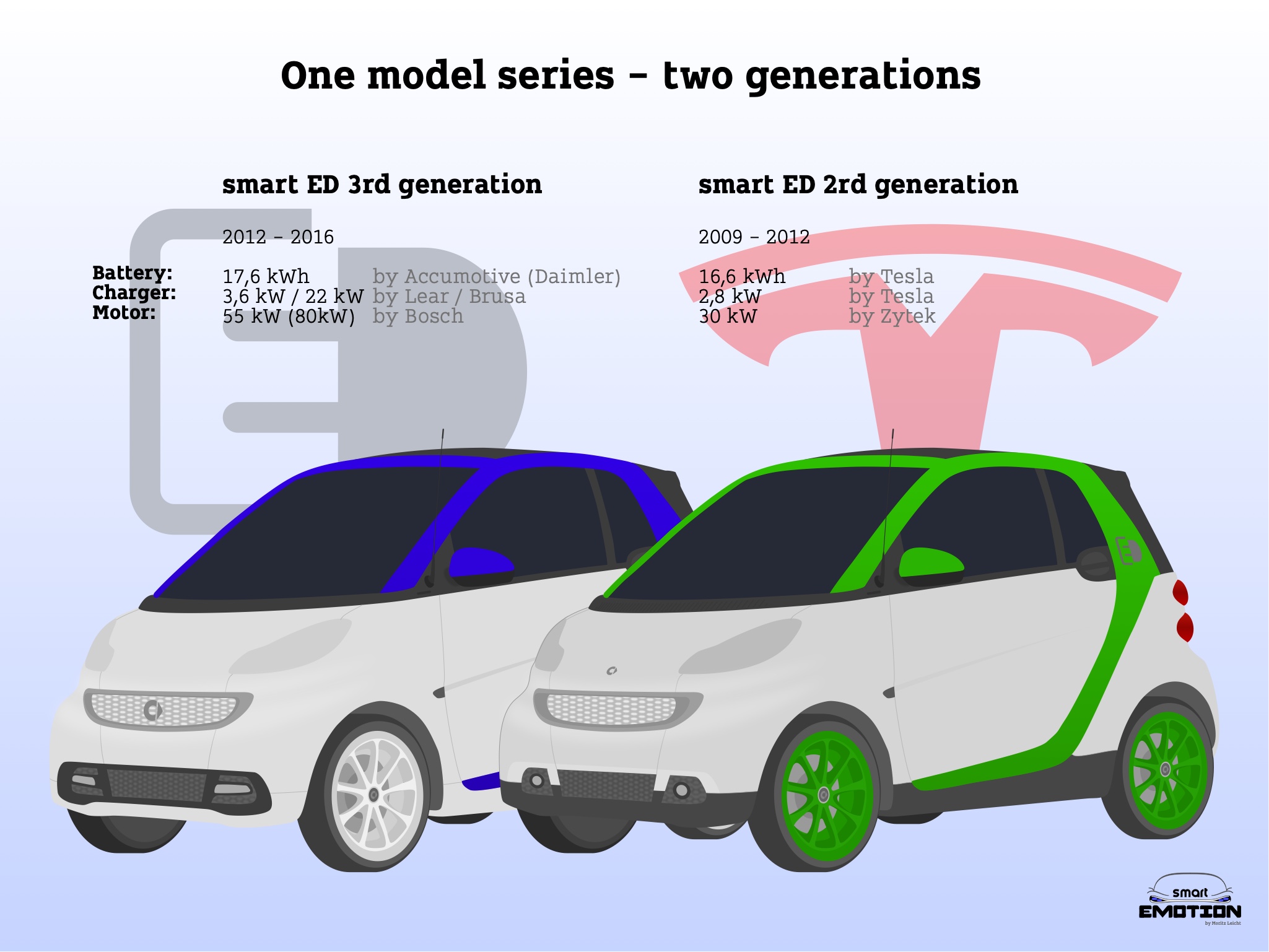 The journey starts with the tZero kit car, which was an all-electric sports car from AC Propulsion that could do 0-100 km in 4 seconds. Thanks to its 150 kW motor (204 hp) and the low weight of only 1,040 kilos, it was surprisingly sporty. It got its energy from a lead-acid battery and accordingly only had a range of around 130 to 160 km. The vehicle was based on the Piontek Sportech kit car. A car that you already bought in parts and then had to assemble yourself.

AC Propulsion, the company behind the tZero, was founded in 1997 and then started developing their kit for the Piontek Sportech. During this time the company built three prototypes with lead-acid batteries.

Martin Eberhardt then convinced the founder of AC Propulsion to build a prototype on a lithium-ion battery. As later with the Roadster, the tZero should be operated with basically laptop batteries. This increased the range of the tZero to 480 km and reduced the weight down to around 810 kg. As a result, acceleration dropped to 3.7 seconds. 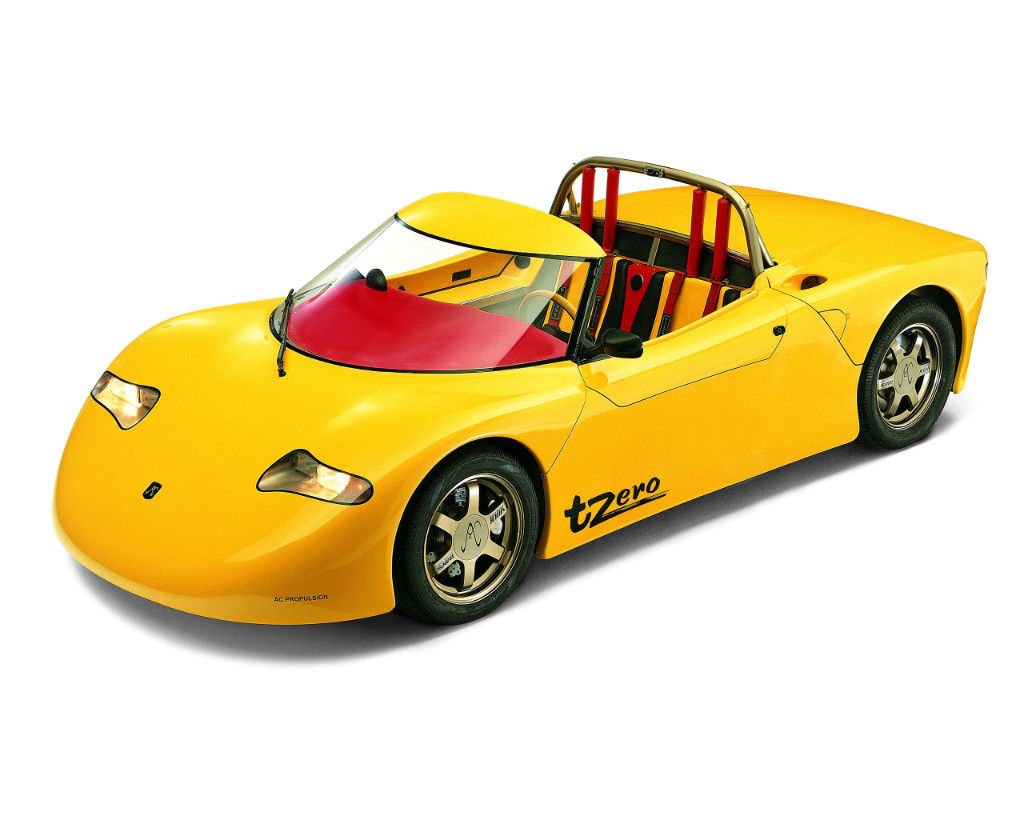 The original target price of the kit was $80,000, but then went up to $220,000 with the much more modern battery cells. Nevertheless, Martin Eberhardt tried to convince AC Propulsion to develop the vehicle for series production. Mr. Eberhardt also proved the tZero's suitability for everyday use by using a prototype as his everyday car for 3 months. However, AC Propulsion was already skeptical about the conversion to lithium ions and even more skeptical about the idea of bringing it to series production. Its founder had long since finished the tZero project and dedicated himself to new cars.

But Mr. Eberhardt wanted this vehicle, as he saw a lot of potential in it. Accordingly, he then founded Tesla in 2003 together with Marc Tarpenning. At the same time, Elon Musk also found out about the lithium-ion tZero and also tried to convince AC Propulsion to develop it for series production. Which they continued to deny, but forwarded Mr Musk to Mr Eberhardt. So it came about that in 2004 Musk invested in Tesla and got on board. Elon Musk later fought in court to be allowed to call himself Tesla founder.

AC Propulsion was also involved in GM's well-known EV1, but that's a story for another time.

Technically, the Tesla Roadster is related to the tZero, even if practically no drawings or components are taken from it. But the young Tesla startup took over some employees from AC Propulsion and with them some ideas and experience. Nevertheless, quite a few experiences from the past were used. For example, the batteries migrated from the side walls of the car behind the driver and front passenger seats.

As with the tZero, the Tesla team quickly realized that they could not and would not want to develop an entire car. Their focus was on the fully electric drive train and so the basis of the roadster was the then current Lotus Elise. Ultimately, there was hardly an original part left in the series production vehicle, but the Tesla Roadster cannot hide its Elise roots in terms of appearance. To make room for the battery, the wheelbase and the entire car were lengthened.

The development of the Tesla Roadster and its hurdles

Coming from Detroit, the automotive city par excellence, David Lyons actually didn't want to go into the automotive world at all. Otherwise he wouldn't have moved to California. Through friends of his, however, he ended up at Tesla as Director of Engineering for everything to do with the roadster. Some people around him thought he was crazy that he was working at a young start-up and was developing such an electric car. Quite a courageous decision for 2004. But as he smiled at me, he also had friends who started at Fisker and we know how that turned out.

With the Roadster, Martin Eberhardt wanted to have a sporty electric car developed. With the Lotus Elise as the basis, it was primarily the powertrain that should come from Tesla. So the battery, the motor, the reduction gearbox, the charger and an all-encompassing controller with inverter.

Each of these components was a story in itself. Tesla had to learn and develop a lot. Both on the technical side and on the strategic side. For example, the reduction gear box was originally given to an external development company, which Tesla later found out that they had probably never built a reduction gear box before. In addition, the original intention was to have a gearbox with several gears. At the latest, however, after Jay Leno broke one in a prototype on the test drive, it was clear that it would be a 1-speed gearbox.

With regard to the transmission, an expensive but successful strategy was ultimately pursued. There were two development teams working on it independently. In the event that one of the two would not make it to series production. Sadly, the strategy was a good idea, because the external company became more and more peculiar over the course of the cooperation and ultimately could not deliver anything that would have worked in the Roadster. 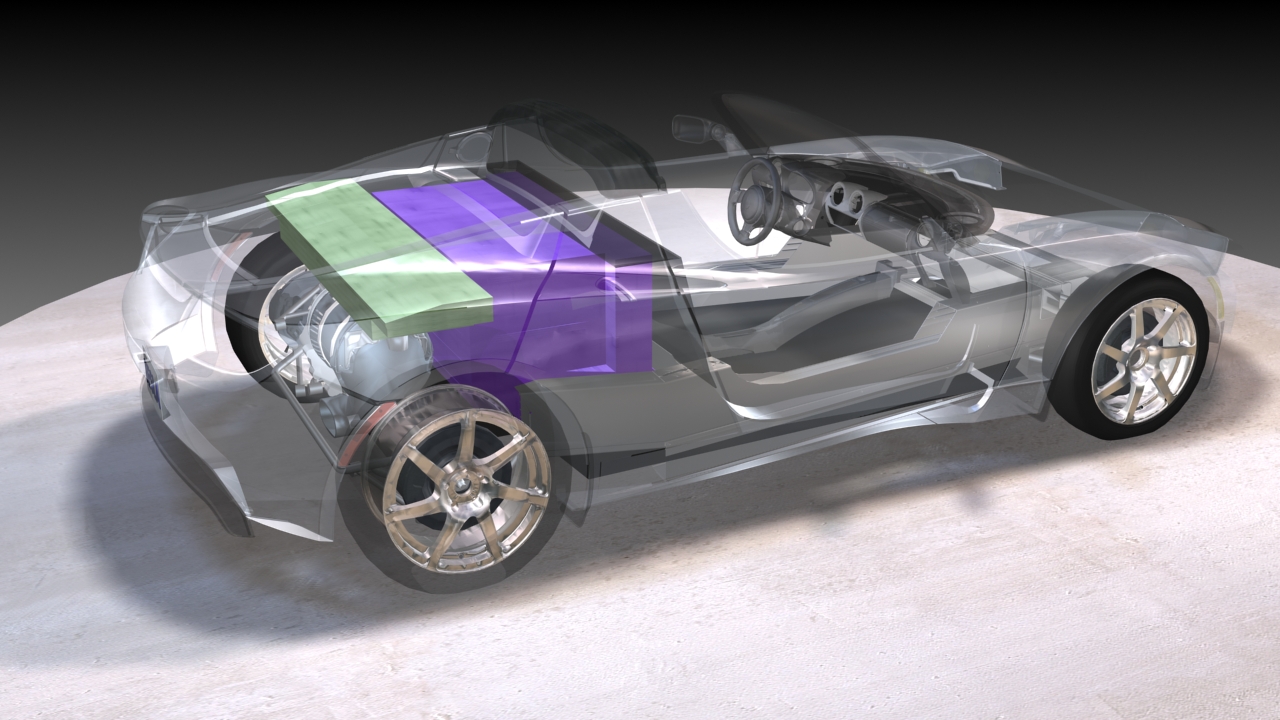 The battery, on the other hand, was relatively simple to begin with. It was just a lot of cells that were connected together. But when some laptop battery caught fire in a plane, which was widely reported in the media, Tesla began to wonder how its own battery would deal with a burning cell.

As Dave reported, it was anything but funny. So he spontaneously had to shift a lot of resources to the topic. In the final design, each cell got its own fuse and the thermal management was built in such a way that a blown cell also heats up the neighboring cells. These, however, absorb and dissipate the heat without going up in flames themselves.

The finished battery then had a net capacity of 53 kWh and the roadster had a realistic range of 380 km. In 2016, Tesla released an upgrade battery with 80 kWh. The range got up to > 500 km and thus further than you would like to drive the small sports car in one session.

Another topic was of course charging. Although there was a very early version of the Type 1 plug, it was simply not made for the up to 70 A with which the Roadster was supposed to be able to charge. So Tesla had to hastily develop a new charging connector that could do this. The now and now iconic Roadster HPWC connector was the result.

As Dave told me, there was a strong belief at the time that this would become the standard plug for electric cars. But it was developed in a hurry and DC quick charging, for example, was not considered. The Roadster HPWC plug can only handle 1-phase 70 A, i.e. 16.8 kW at AC 240 V. Still, that was a remarkable achievement for the time. 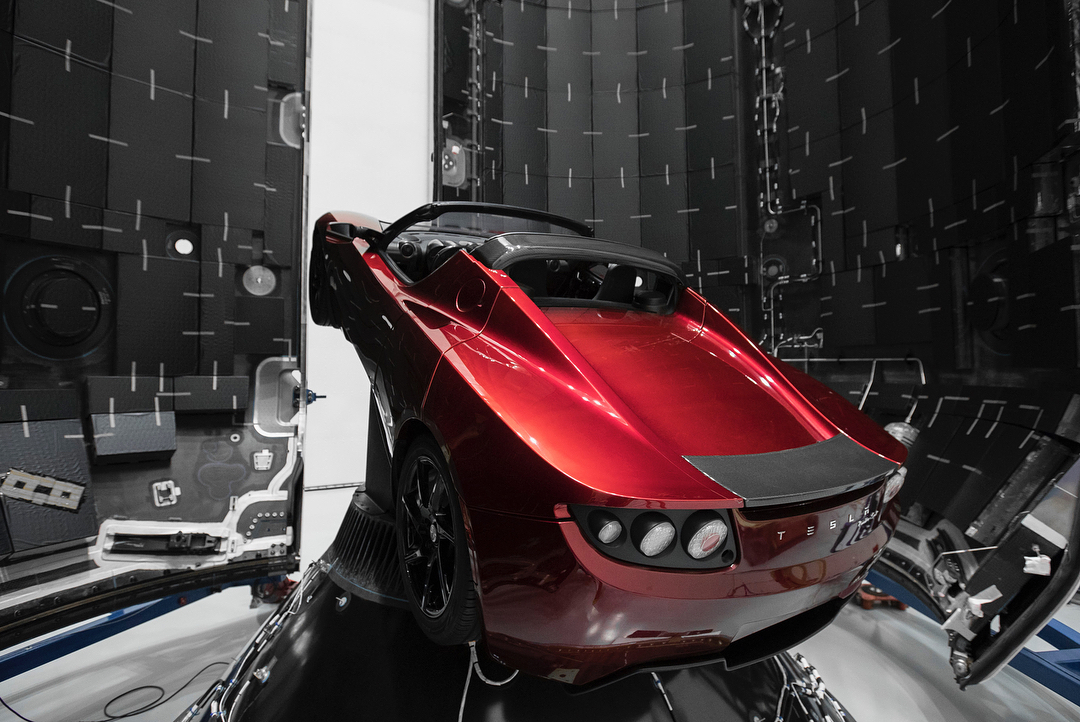 Another important component of the roadster is the so-called PEM (Power Electronics Module) and of course the motor itself. With an output of originally 185 kW (248 hp) and 270 Nm, the reduction gear box has always been subject to very high loads and was therefore difficult to develop something that could handle the torque of an electric motor. Later versions of the roadster even had 215 kW (288 hp).

It must have been an incredibly exciting time, but also a very nerve-wracking one. As was the case with Apple at the same time with the iPhone, many marriages have broken in the development of the roadster. Together with Elon Musk, who was acting under stress and lack of money,this was why Dave left the company at the end of 2008 and moved on. Today he drives a Model 3 Performance and is amazed about the performance it has and how impossible this seemed when he was at Tesla. When it comes to money, the cooperation with smart / Mercedes was very important for Tesla.

Elon Musk said in a later interview that Tesla would not exist today without this cooperation. Which of course sounds great for a smart fan page. But you also have to say that it's for smart without Tesla the same way. smart wouldn't be anymore, if it wasn't for Tesla.

The Tesla smart from Mexico

Parallel to the Roadster, Tesla began to cooperate with Mercedes and to develop a new electric fortwo for smart. Dave had nothing to do with it and was surprised when this project suddenly appeared at Tesla EQ. Also because parts of its developers were deducted from the Roadster project. According to the story, Tesla employees bought a smart fortwo with a gas engine in Mexico and drove it to California. There they then built a first prototype from it. A smart fortwo with the 248 HP drive train of the Roadster. According to Elon Musk, this vehicle had no trouble doing wheelies.

But that was out of Dave's purview and accordingly will be a topic for a future article here. As it currently appears, this prototype later ended up at BRABUS for a visual refinement and became the BRABUS ULTIMATE HIGH VOLTAGE based on a smart fortwo. Which was presented to the public at the IAA in 2009 in parallel with a BRABUS refined Tesla Roadster. What happened to it then and whether it still exists today is unclear. If you know something about this car, you are welcome to write to me via my imprint.

The roadster-specific display in the smart ULTIMATE HIGH VOLTAGE. According to information from somebody of the Tesla Roadster Community, who was sitting in the vehicle at the time, the control units in the smart still thought they were a Tesla Roadster. The VIN of the roadster is unfortunately lost to time. 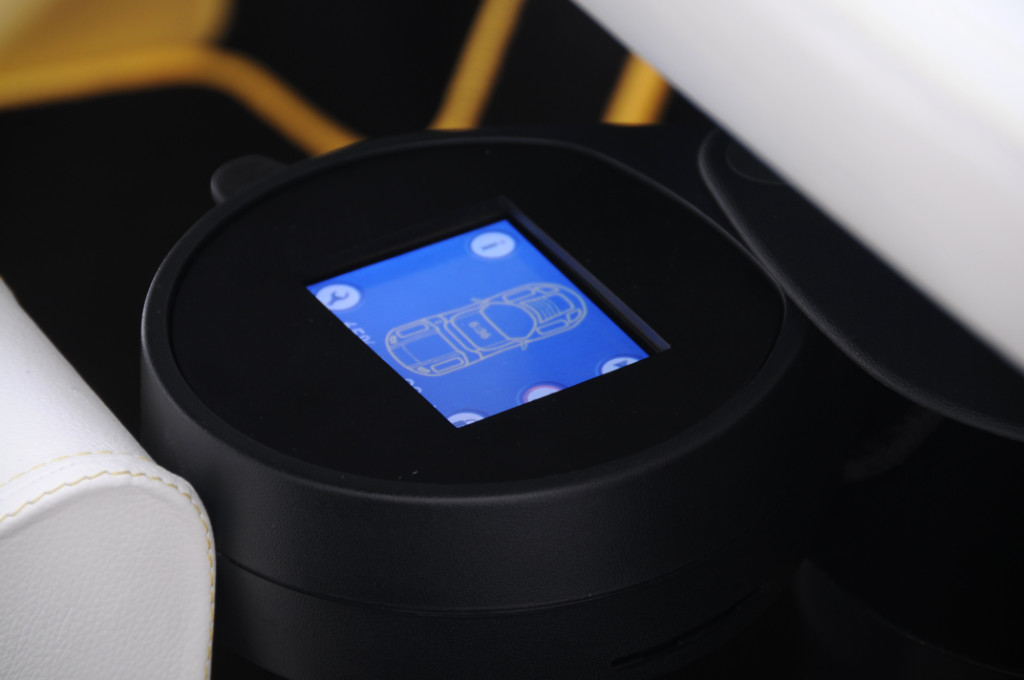