We've been almost 10 years now, and of course we've already tried out a lot of things when it comes to home charging. I only recently reported on Schuko charging. In the meantime, our setup has grown to 5 private charging points and, most recently, also a public 22 kW charging station. Everything together on a house connection, with the corresponding load management and the public charging station including German calibration law and billing rules.

In this article, I'll go over how our charging park has grown, what our experiences are, and how to accommodate it all without a blackout.

10 years to get to this point

A good 10 years ago we ordered our beloved smart ED, which is now over 270,000 km old. The setup back then was very simple: A garage with a standard wall socket and that's it. A few broken emergency charging cables and Schuko sockets later, we know that charging bricks are a fire hazard, get a wall box. Our choice was the NRGkick from a Austrian company, which found its way into the old double garage together with a revised electrical installation and continues to serve us well on trips to Europe.

In 2015, my parents decided to buy a Zoe in addition to the smart, so that we have been fully electric ever since. The charging setup grew accordingly and we now have two NRGkicks. When I turned 18, I took over the smart and the first used long-distance electric car was added. Another smart came with my brother's driver's license and another long-distance electric car with my sister's driver's license. So my parents now have two Teslas, my student siblings have the old smart and the Zoe, and I have my smart. 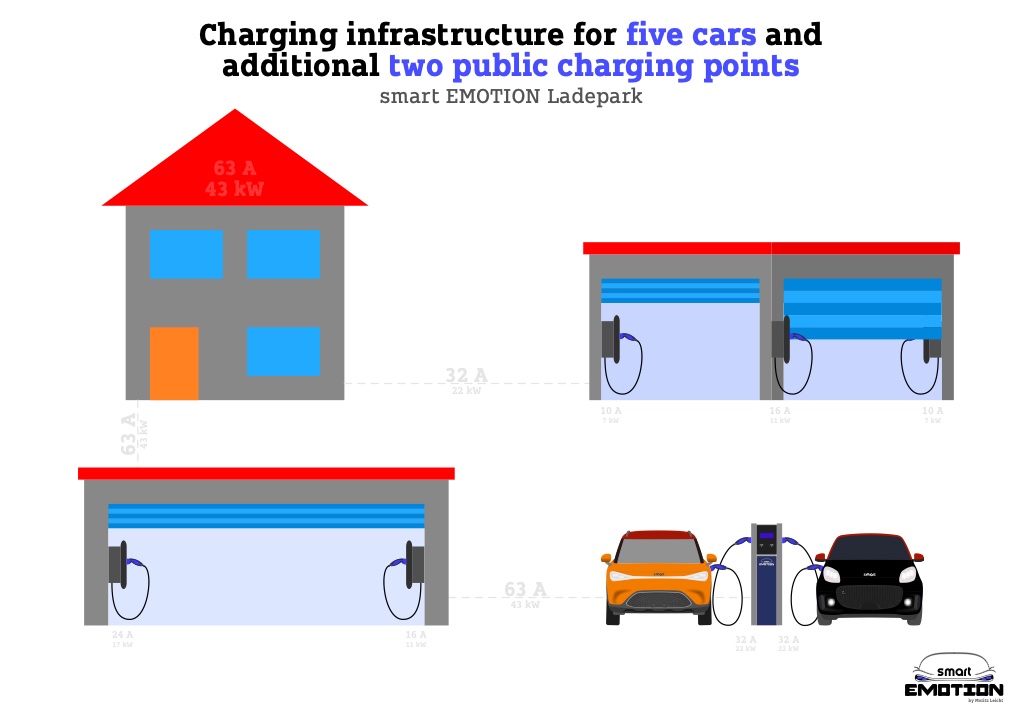 Accordingly, the simultaneity factor became an issue and we now came to the limitations of the house connection. It is true that having to look who is charging and calculating whether the is still enough power left for another car is much less common in practice than you might think. After all, it is practically never more than two people who come home at the same time and have to charge. Nevertheless, it starts to get in the way and would be much better automated.

Despite the fact that we have 22 kW available per charging point, we usually charge the cars with 7-11 kW each. Depending on what the solar system delivers. Even the large 75 kWh & 100 kWh batteries, because they also have enough time overnight to recharge more than enough range for the next day.

Load management is comfortable and nowadays easy to configure

We then took the a German wallbox funding as an opportunity to equip our four garage parking spaces with wall boxes and also to properly set up the electrical installation in the second double garage. The choice fell on the Tesla wallconnectors, as they have static load management. This means that they talk to each other continuously and throttle the power of the individual charging points if too much is requested at the same time by the cars.

The two pairs of garages are too far apart from each other and the wall boxes are managed using their own wireless network. Which is why the two pairs regulate independently of each other. Even tho the boxes could actually operate up to 16 pieces in a load management. But since both pairs also have their own sub-distributions and supply lines from the house, this is not too much of a problem. 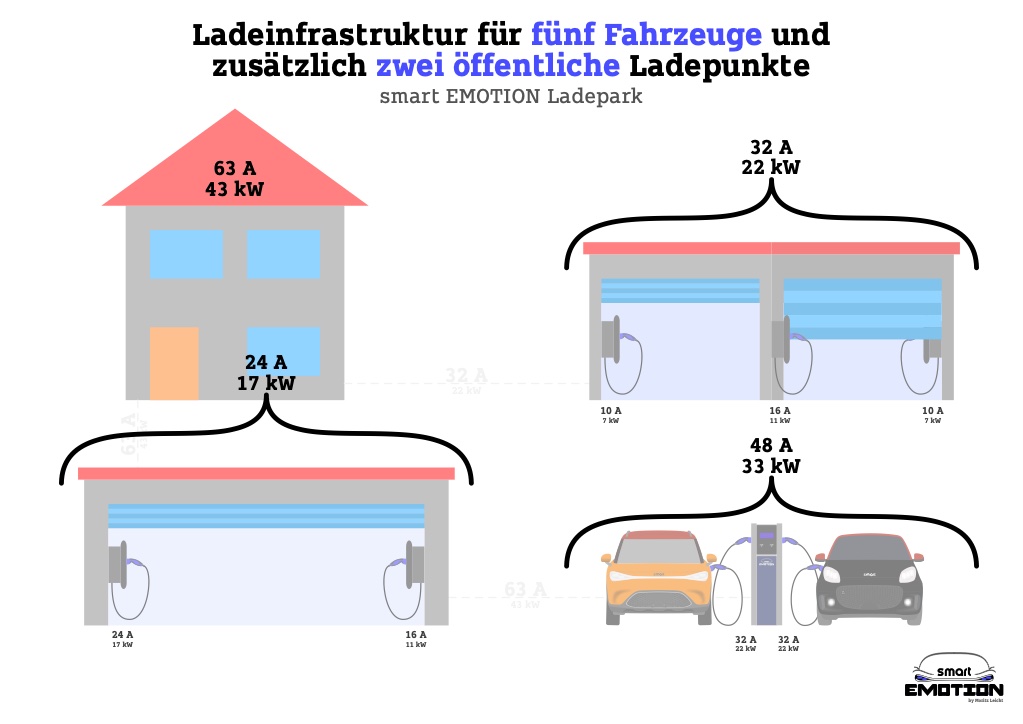 In addition to the Tesla boxes, there is another box on the outside wall of the old pair of garages. An 11 kW Vesel box, which has a dynamic load management. However, this function is not required in our setup. But another one instead: since the box can be unlocked using an RFID card, we can ensure that only we get our electricity here. Incidentally, for the sake of simplicity, we did not register the supplied RFID cards from Vesel, but the charging cars we also use on public chargers cards, which we have anyway. Of course, the company behind these cars does not get anything here, or even notices that the cards are used for this purpose. But we save ourselves a card in our wallet.

It's similar with some chips that you use to log in and out of your employer's time. Only the use of the identity card or the bank card at the wall box should be avoided.

The overall interaction of all 5 boxes has priority over the public charging station. This public charging station gets what's available on the house connection. In 99% of the time, however, no one will notice at the public station that a load management is already being ready to throttle. Utilization is not usually that high. Nevertheless, all boxes are of course registered at the network operator and they are also aware that we use load management. Network operators are always happy about the use of load management systems.

My own public charging station

One thing ahead: My public charging station with billing and everything is of course more passion project of mine.

But it's also a hobby for us and when the EnBW subsidiary Sm!ght announced that they were giving up the AC business and selling the remaining inventory for a very good price, I naturally had to strike.

From the house connection to the Tesla double garage and on to the public station, we have laid 5x16 mm² line and network so that the station can access the full power of the house. It is configured with 2x 22 kW connections. But it would distribute a maximum of 33 kW (48 A), if two cars with 22 kW chargers would actually be connected at the same time. This is ensured by static load management in the charging station.

In addition, a dedicated electricity meter on the main distributor in the house monitors the total consumption. If we were cooking, charging an unusually large amount at the same time, the station would throttle its output accordingly. It would also make use of the additional power if the solar system or the electricity storage in the basement were able to support the house connection.

Of course, in Germany you can't say public charging station with billing without also talking about the so called Eichrecht. The most complicated and German way of calibration law. Our charging station is from mid-2017 and was probably in stock at Sm!ght for 1-2 years. Accordingly, we still had to convert it match the calibration law. Unfortunately, this is much more than just calibrated meters, because it already had them without being compliant with calibration law. 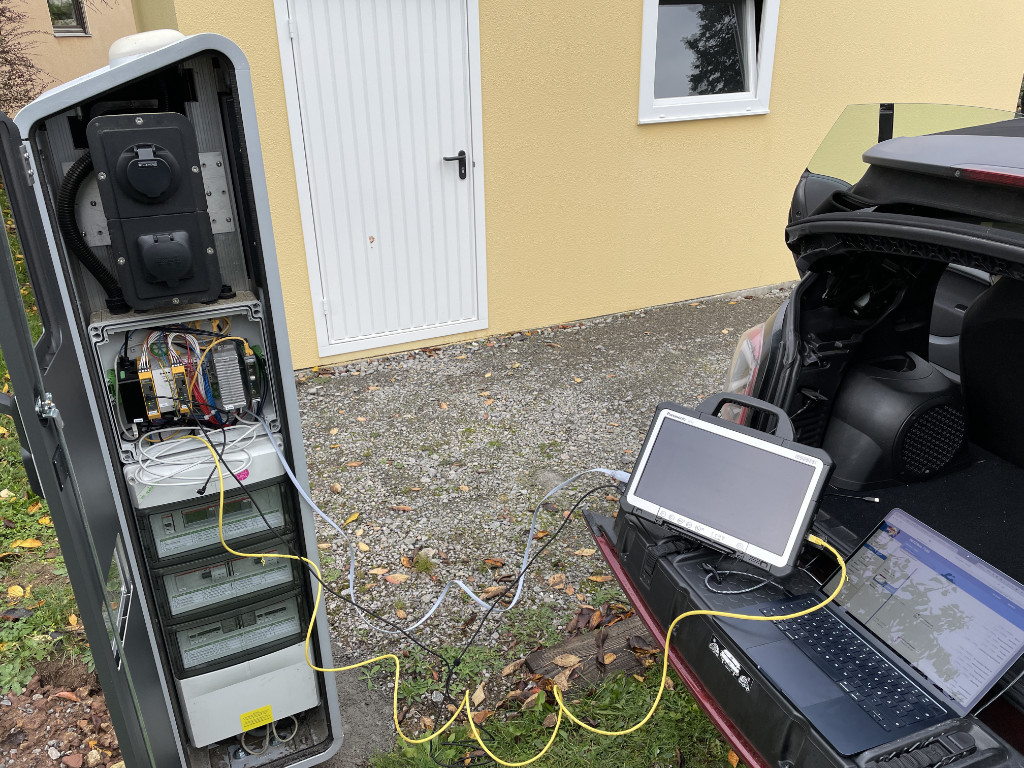 The electricity meters were replaced with other calibrated meters and the charging point controllers were also replaced with practically the same, but slightly different ones. The software has also been updated and a few internal cable routes have been changed. The station is now as precise as before, but now conforms to the German Eichrecht. Incidentally, these gimmicks are also why EnBW gave up the AC business and why AC prices will be at the same level as DC station in the future here. Maybe even more than DC. Simply because with AC stations, only a maximum of 22 kW can be sold, instead of 220 kW and more. Accordingly, there is a lack of sales in kWh to pay for the calibration law and other bureaucracies.

The station wasn't even integrated into the backend, the first person from the town was already standing there and wanted to know if he could charge there. Which of course made me very happy. In the meantime it is also integrated in a backend. This means that it can be activated with practically any charging card and also appears on the card in the apps of all well-known providers. 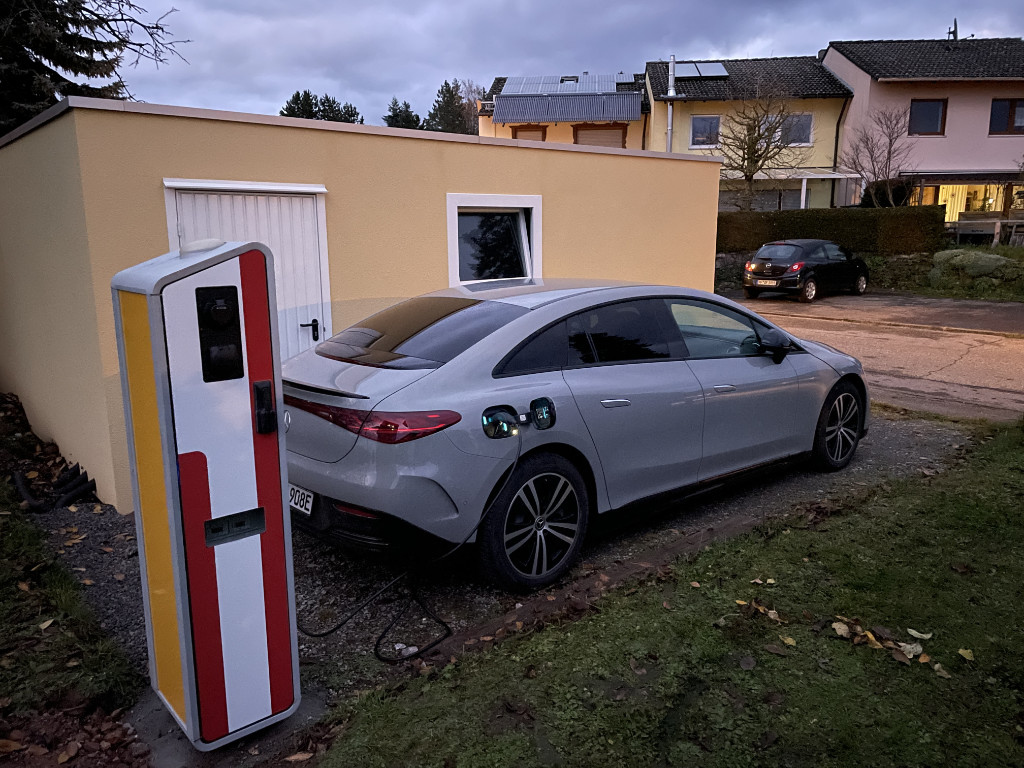 Conclusion: What can you take from my experience for your own charging infrastructure?

A public charging station is purely a hobby project and only exciting if you personally enjoy it and are crazy enough to want to do it. The at least the German bureaucracy in the background and the billing are really a big road blocks. Of course, you also have to have the space for it. With us, the 2x 22 kW station replaces a public 11 kW box.

Again in the private sphere, we mainly learned everyday things. One of the first things was: Being able to charge at home with 22 kW is cool, but actually only because you can. You don't really need it. It's more exciting to have the power and then be able to charge 2-5 cars at the same time. So you don't have to change plugs at night or worry about anything else. Nevertheless, every car is full in the morning. Effectively, 7 kW are enough for each car at home and they harmonize wonderfully with the typical 9 kWp solar system.

And from day 1 it was already clear to us that we didn't want to unpack any charging cables at home. That should already be on the wall box. It is simply more comfortable and vandalism is not to be expected in the private sector.

The last few years have also shown that more than one car is rarely charging at the same time. But with two cars or more, we would still choose statistical load management. Today there are so many wall boxes that already support this and it is simply another convenience feature not having to think about it anymore. Of course, it's also nice if you can lead the cable out from under the garage door or if you have another box outside anyway. Then you can also invite friends to visit you. That has already happened in our circle of friendsnaturalized that the visitor is allowed to charge when they visit.