When Brusa brought their NLG663 back in 2012 to the market, they where the first company to build a 22kW charger in series production. Back then, other manufactures where only able to fit 11kW in the same volume. The smart ED3 was the first electric vehicle to be equipped with it. A special feature of the 22kW charger is its high efficiency and its quiet operation, it also has a galvanic isolation between mains and HV battery and is VDE certified. That's also why it's being used in the 2.000 PS Rimac C_Two.

The 22kW charger can be operated from 1-phase to 3-phase power and from 6A to 32A (per phase). Smart has adapted the software a bit so that it does not charge more than 16A in single phase mode, that's been a requirement to get the VDE certification due to the unbalanced load. Another feature of Brusa's NLG664 is that multiple devices can be connected in parallel. This feature is used, for example, by the mobile DC charger from Designwerk.

With the exception of the 1st series (Identify 22kW chargers affected by the serial error), the NLG664 charger is now known to be extremely reliable. Here I'm analyzing a charger from the 1. series. In conclusion, I will show how you can repair it and whether it makes sense. 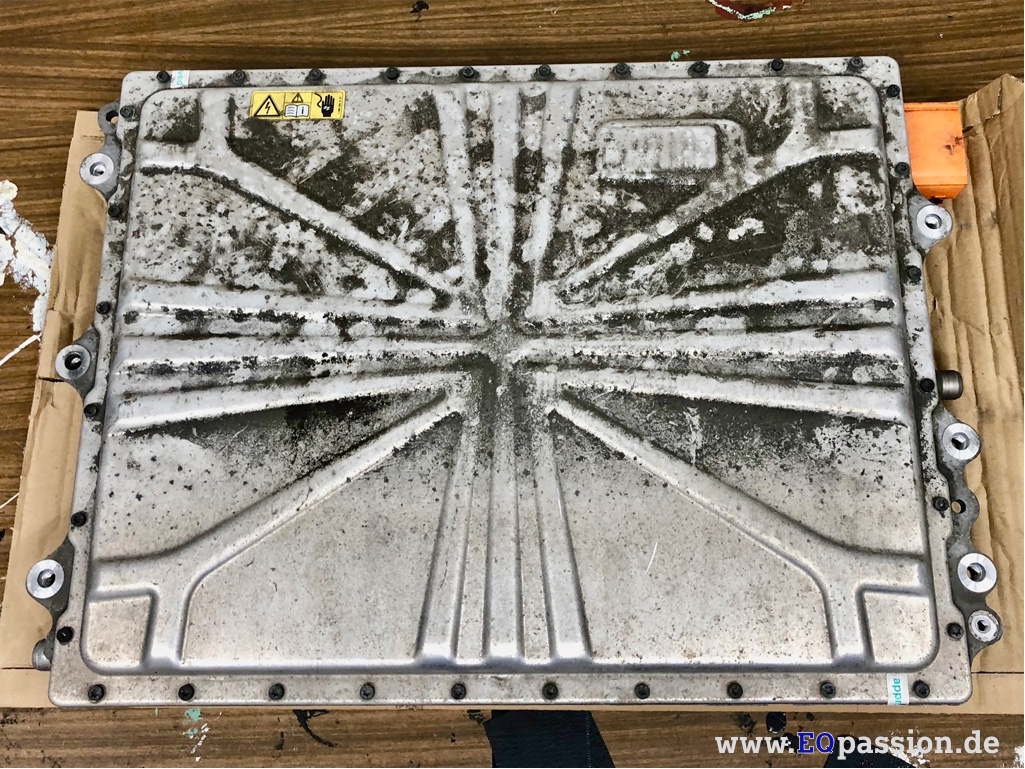 Here it is, fresh from a smart ED3.

After 94,000 km, this 22kW charger blessed the time, it didn't charge anymore, neither in single phase mode nor in three phase mode.

From my experience I can also tell, that the NLG664 is also capable of charging with AC 110V.

On the bottom of the NLG664 the plate of the water cooling is what catches your attention, it's fixed in position with over 40 screws. That's to ensure it lays flat on the seals, making sure, that the plate seals perfectly under all circumstances. 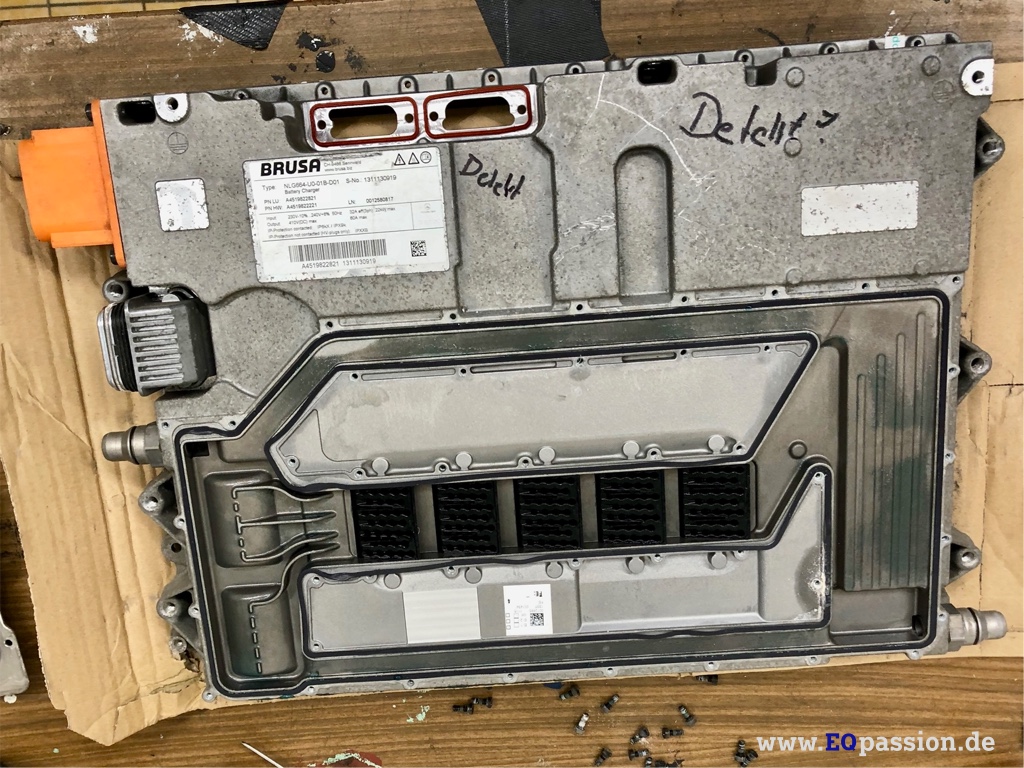 And this is how it looks with the lid open, the cooling water flows from the left to the right, taking one of three paths.

The main path has integrated the black plastic parts, which ensure, that the coolant is swirled and absorbs as much heat as possible.

The components to be cooled are on the other side of the cast housing, directly below the main cooling path are 5 diode bridges. 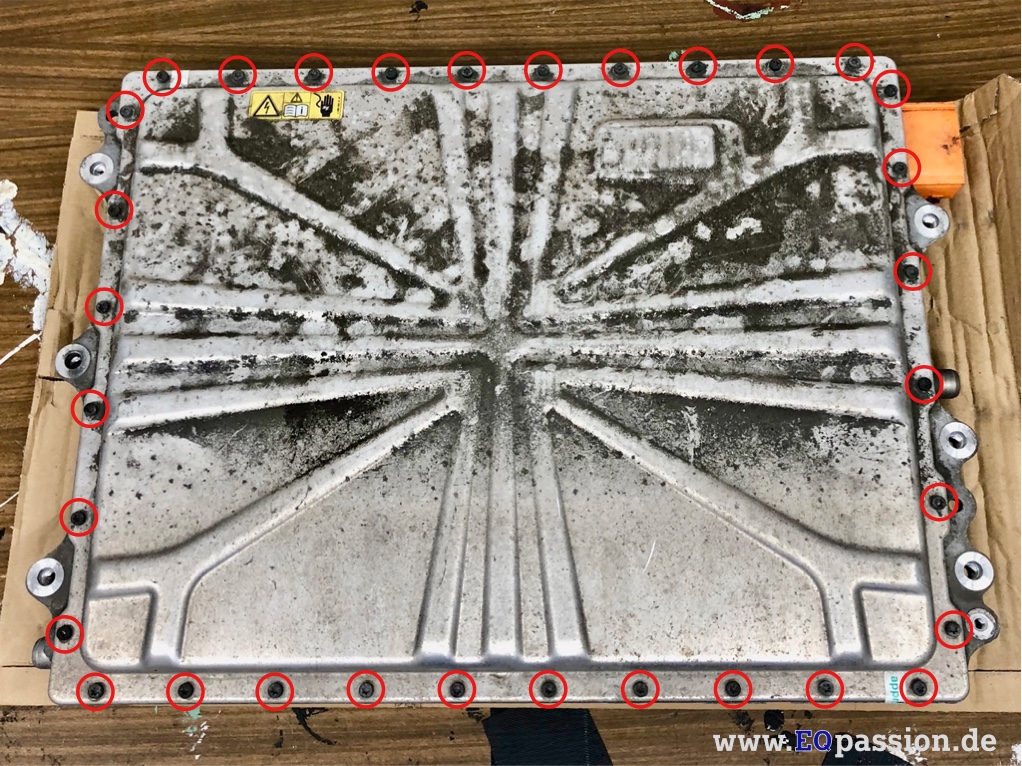 The entire top of the NLG664 consists of a sheet metal cover, which is held in place with 30 screws. The amount of screws is also to make sure it stays tight, but this time it's to prevent moisture from entering.

Because the lid is sealed and moisture has no chance of entering, there is no need for coatings on the PCBs, which would make repairs almost impossible.

Here you can see the main PCB, it's fixed to the case with 8 screws. The processor board is placed on its top.

In order to remove the main PCB, the processor board does not have to be disconnected. But you need to remove three cables, which go from the HV board below to the main PCB.

Step 6 - Loosen the HV board 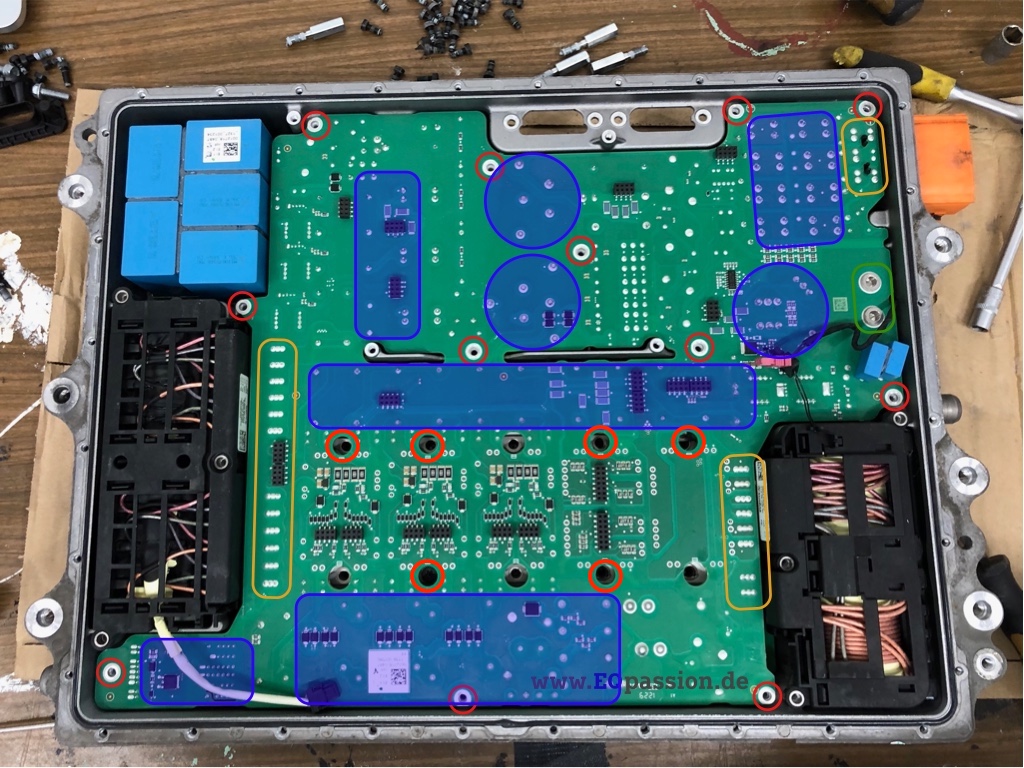 Now comes the exhausting, time-consuming and somewhat risky part: For getting the HV board out of the housing, you have to overcome three hurdles:

First of all, 12 screws, with which the HV board is screwed to the housing. The following three things should then be noted: 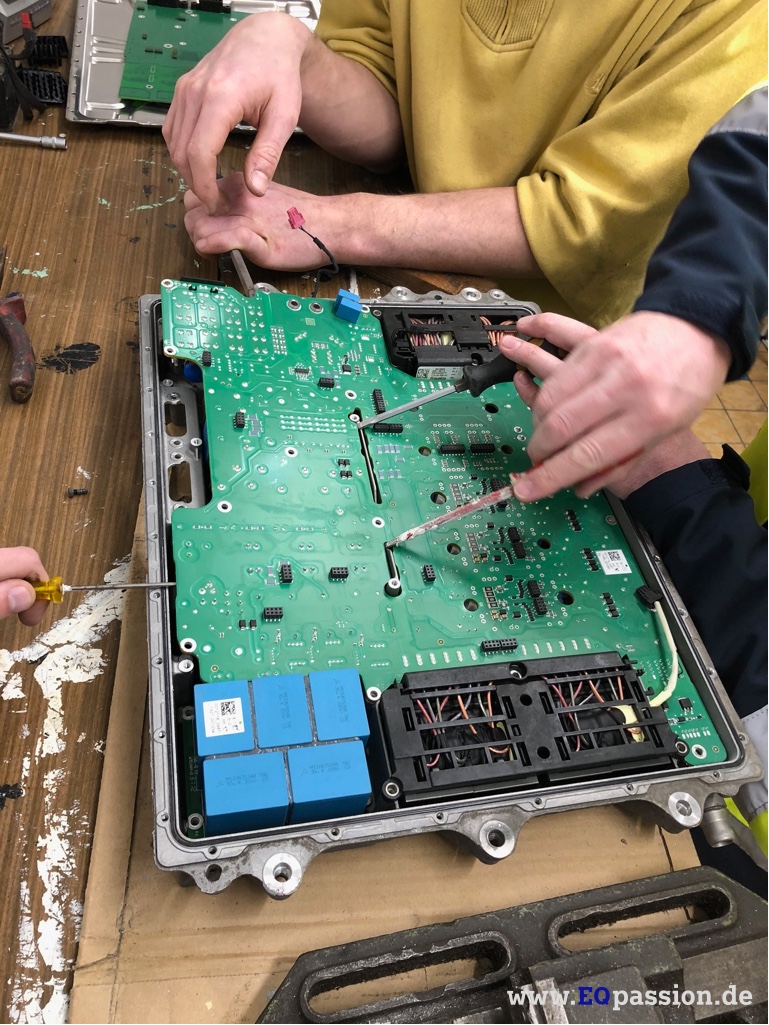 It is now advisable to heat the housing from below, especially where the cooling circuit is.

After that, carefully and slowly pull out the HV plug connections and detach the glued components from the housing.

The circuit board is relatively heavy and does not want to get out of the housing, take your time and think about how you want to start where.

This is how it looks when the HV board has been completely detached. Here you can also see how it sits into the housing. 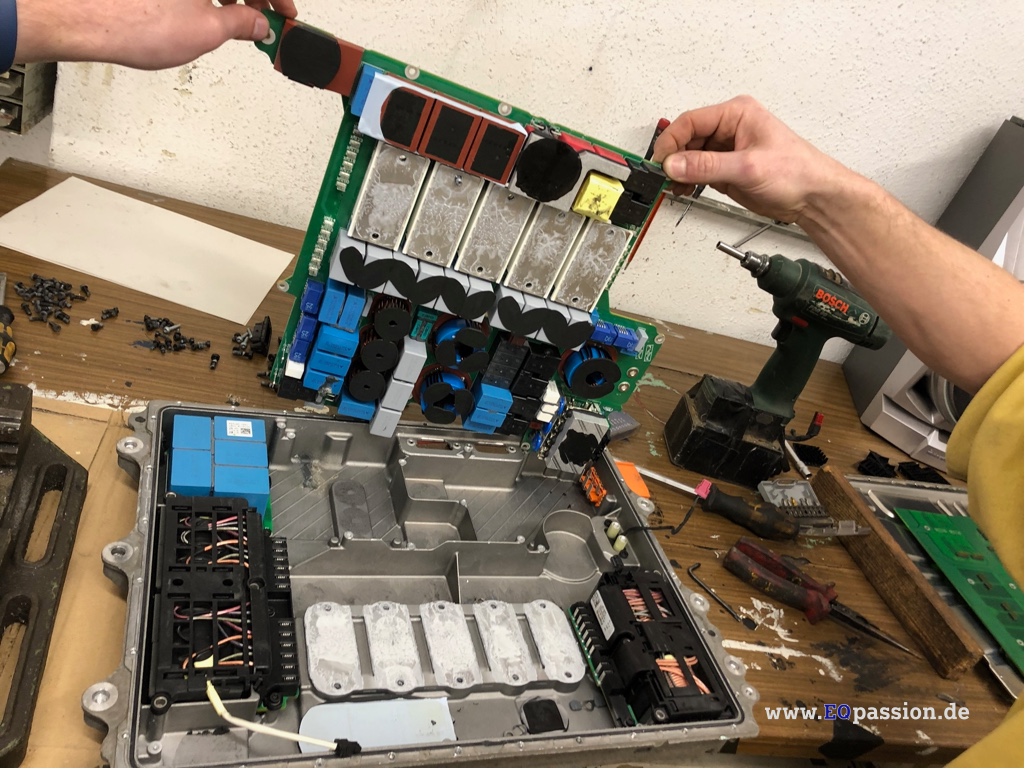 Here you can see how efficiently everything was put together.

After the HV board has been removed, a complex casting with a few coils and capacitors remains.

It's most likely, that the coils are a filter for the AC input and that the capacitors further smooth the DC current

Step 8 - Analyze the HV board 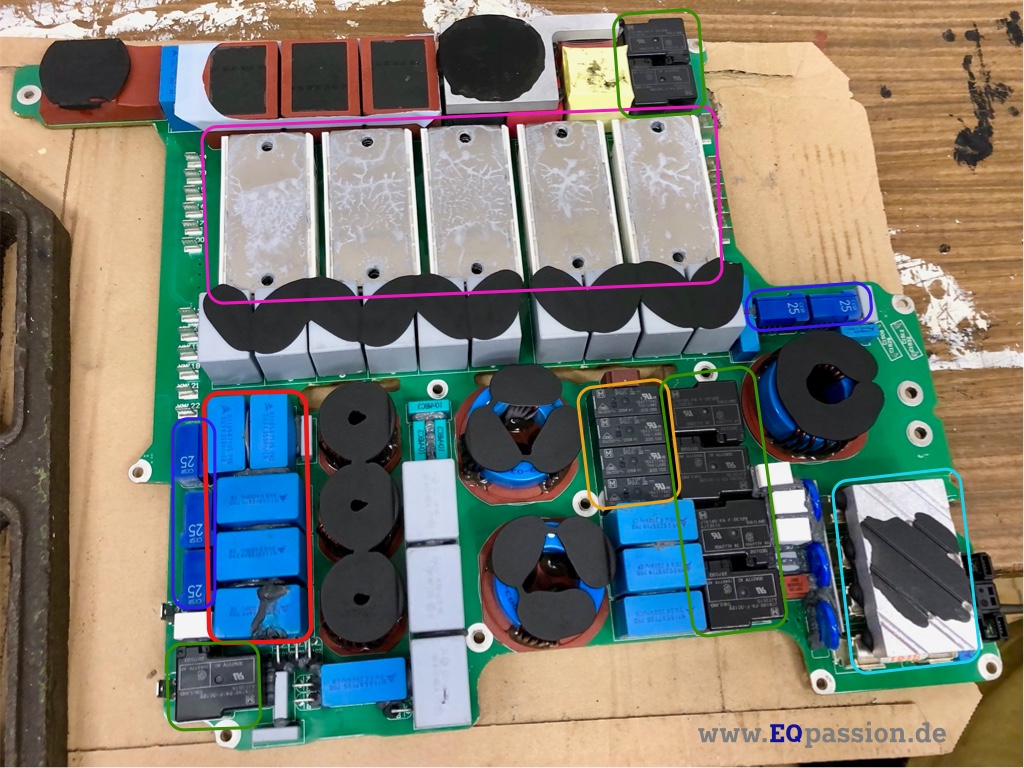 This is what the HV board looks like. Although it is densely populated, the housing is made in a way to separate the coils.

And here is the culprit, a burst capacitor.

It was responsible for L1, making the entire 22kW charger unusable. You can also see that the third capacitor already started getting a bump as well. It would have been the next one to burst.

From my experience it's by pure luck which one bursts first. If L2 or L3 bursts, you can still charge at least at 230 V with up to 3.7 kW.

According to a source close to Brusa, these torture capacitors were not properly manufactured by the supplier within the specifications. 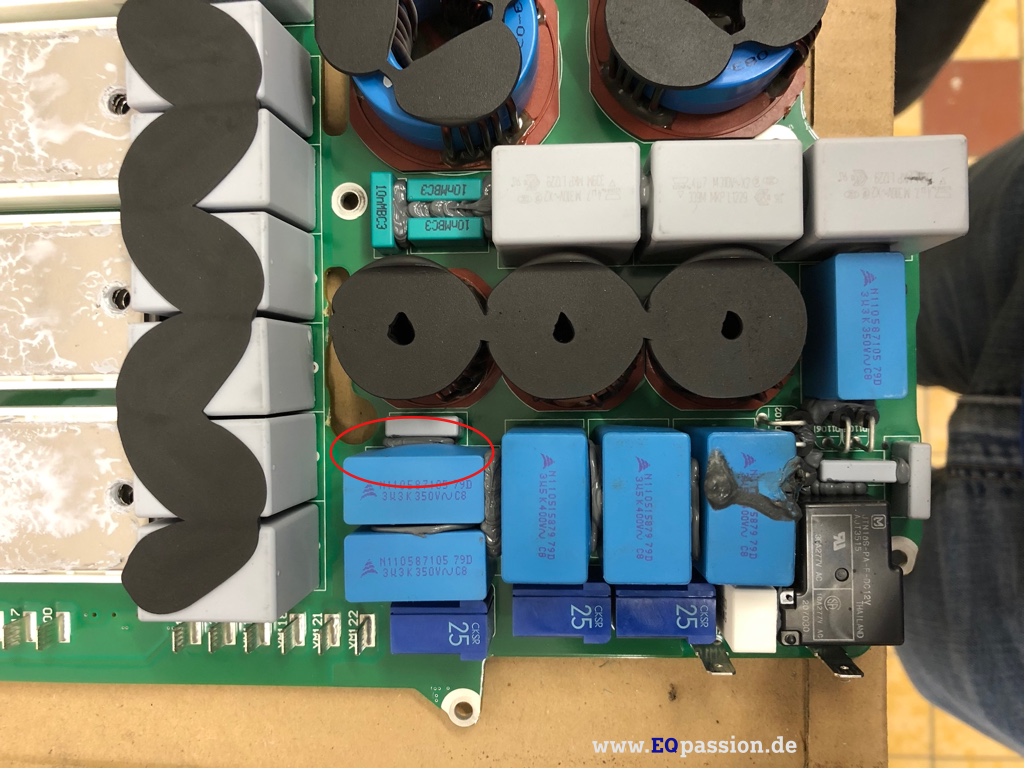 When taking a closer look, you notice, that the two capacitors next door are also affected by the problem. The top of the two has also started getting bigger.

It is these capacitors you would have to replace to get the NLG664 up and running again.

The affected capacitors are very difficult to access, but it is possible. After you have removed the lid of the NLG664 and the main PCB, you have to work with heavy equipment and patience: The HV board is screwed into the housing, inserted very firmly and, for heat dissipation, also glued in. When removing the HV circuit board, you need to make sure that you do not break any conductor tracks and that the lever tool is only used where you won't damage conductor tracks. The electrical connectors are very tight. The forces to be used are very high, there is always the risk of slipping and damaging something to the state where it can't be repaired anymore.

When you have overcome all these hurdles, you have to replace a total of 5 capacitors:

The capacitors had special dimensions and are no longer manufactured. If you want to replace them, you have to use ones that are not 1:1 suitable.

The NLG664 can be put into operation again by replacing the affected capacitors. This has already been done by Péter Varsányi EV from Hungary in 2018. However, experience shows that the defect occurs again. Replacing the capacitors is not a permanent solution. Usually the burst again in the next 40.000 km, regardless of how fast or slow you charge and what kind of capacitors you install. It looks like Brusa charged more than just the capacitors in the 2nd generation of the 22kW charger, that's also why smart is replacing 1. generation 22kW charger with 2. generation chargers. Sadly that sets you 7.000 € back.

In very rare cases it can happen that 22 kW chargers of the 2nd generation fail. Even I've only rarely seen that now. In this case, the capacitors did not burst, but the input fuses on the power board blew. It's relatively easy to check: Simply remove the 22 kW charger in the vehicle and open the cover. Without further action, you can then access the back of the fuses and use the multimeter to check whether they are still functional. The couple of times I saw that, a fuse had blown. Nothing else was damaged. 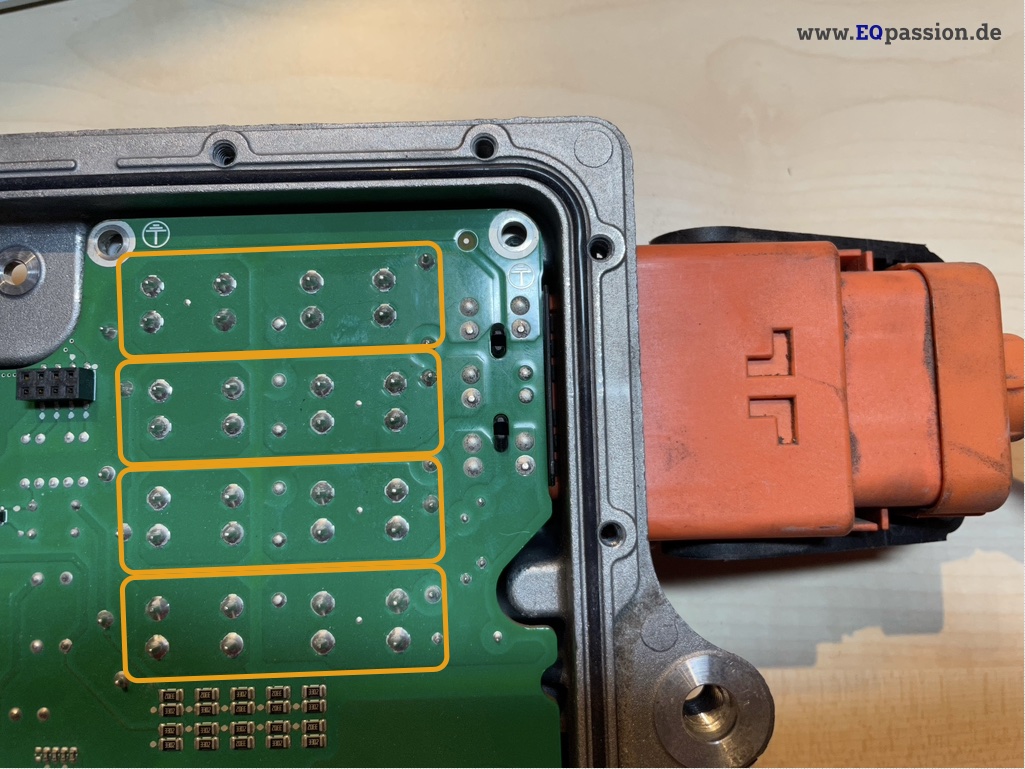 However, replacing them is almost as difficult as replacing the capacitors in the 1st generation. Since in both cases the power board has to be levered out in order to replace it. Accordingly, I also advise against a repair here. In the cases where I saw this, the capacitors were completely fine. 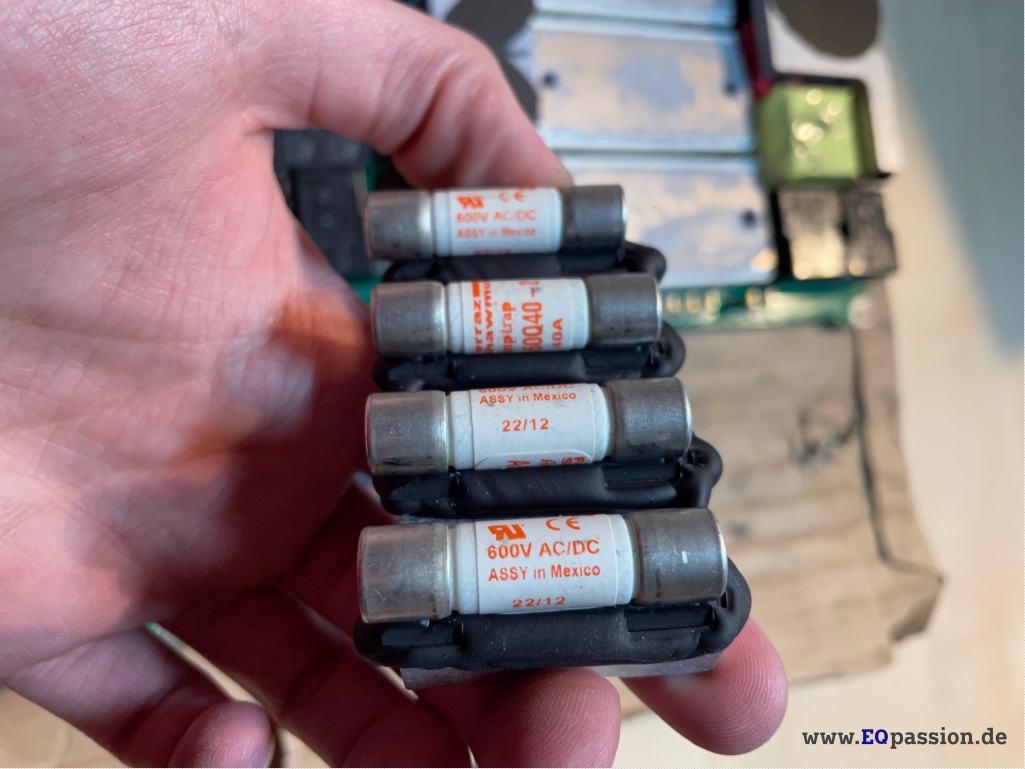