It was a long way before smart delivered the first production car in 1998. We all know the story of how Mr. Hayek came from swatch and wanted to build the infamous swatch car. A small, fully electric two-seater whose name the smart fortwo still bears in common parlance today.

But how was it really?

Over the last 5 years I have collected everything possible, written together and thought about it. This has now become the trilogy of the smarts story. The first part is about how Hayek's swatch car failed at VW. In the next two weeks I will then go into how it went on after that.

It was Mr. Hayek who got the Swiss watch industry rolling again. Previously, it had been shaken up by the Japanese and had lost large market shares. Thanks to him, swatch became the example of a European industry that is experiencing unrivaled dynamism through its reorientation. In an interview he says that swatch delivers what it promises:

Being a good businessman, he knew he had to do something with his current fame and name.

The Japanese flooded the market with their mass production and they did it with watches as well as with cars. So it wasn't really a big jump. Apparently Mr. Hayek just had to do what he had previously done with the watches. Therefore, the same motto for the car that he already had for the watches: highest quality, lowest price, provocation and fun in life. In my opinion, a motto that smart should still have today.

According to his own statement, his motivation here was not only economic in nature, he was also enthusiastic about environmental protection. For this reason, there was also the requirement that it had to be ecological.

In fact, he had previously worked as a development consultant for Volkswagen, Daimler Benz and Ford. So he actually knew very well what he was getting himself into. On the other hand, he also had quite a few contacts here and there, which certainly made the start a little easier for him.

Before Mr. Hayek went on tour to find out which manufacturer would like to support him, he first wanted to put something together that could be demonstrated. Today you would probably call something like a concept car. To do this, he built a new team of swatch employees, took over the inventor of the swatch watch and built a team of young people around him who didn't mind breaking with conventions. Certainly also because they where so new to it, they didn't even know what the conventions in this business were.

In addition to the size of the car, the focus was above all on the electric powertrain. The idea of building a vehicle with all-wheel drive came up relatively quickly. Four-wheel drive thanks to wheel hub motors. Although it must also be clearly stated that there were not really wheel hub motors and more wheels with motors attached to them. They were part of the unsprung mass, but weren't proper hub motors. Although I will speak of wheel hub motors later on. Each wheel got its own motor, so it was relatively easy to have ABS as standard. It all started in 1990, "Up until 1991, people were mainly talking about electric cars. From that time on, people started talking about a possible hybrid car. Because we were aware of the limitations of a purely electric vehicle," says Denis Berdoz, the coordinator of the various vehicles.

The first component carriers were created on this basis. In other words, production vehicles that were dismantled and rebuilt with the system to be tested. These were then tested relatively soon with success on an ice field in Biel and in the cold of winter in Sweden.

There was probably a lot of pioneering spirit and this time must have been quite exciting. The young team wanted to show the world what can be done and rethink everything if possible. Another idea was to ban the steering wheel from the car and steer it with a joystick instead. Mr. Hayek found the self-developed system revolutionary and emphasized that not even Saab could bring it to the man and woman, but they will do it. But as far as I know, that was the end of this steering system. There were safety concerns as this was effectively a drive-by-wire system. There was no longer a mechanical connection from the steering stick to the wheels and it was therefore difficult to protect against electrical failures on the freeway. 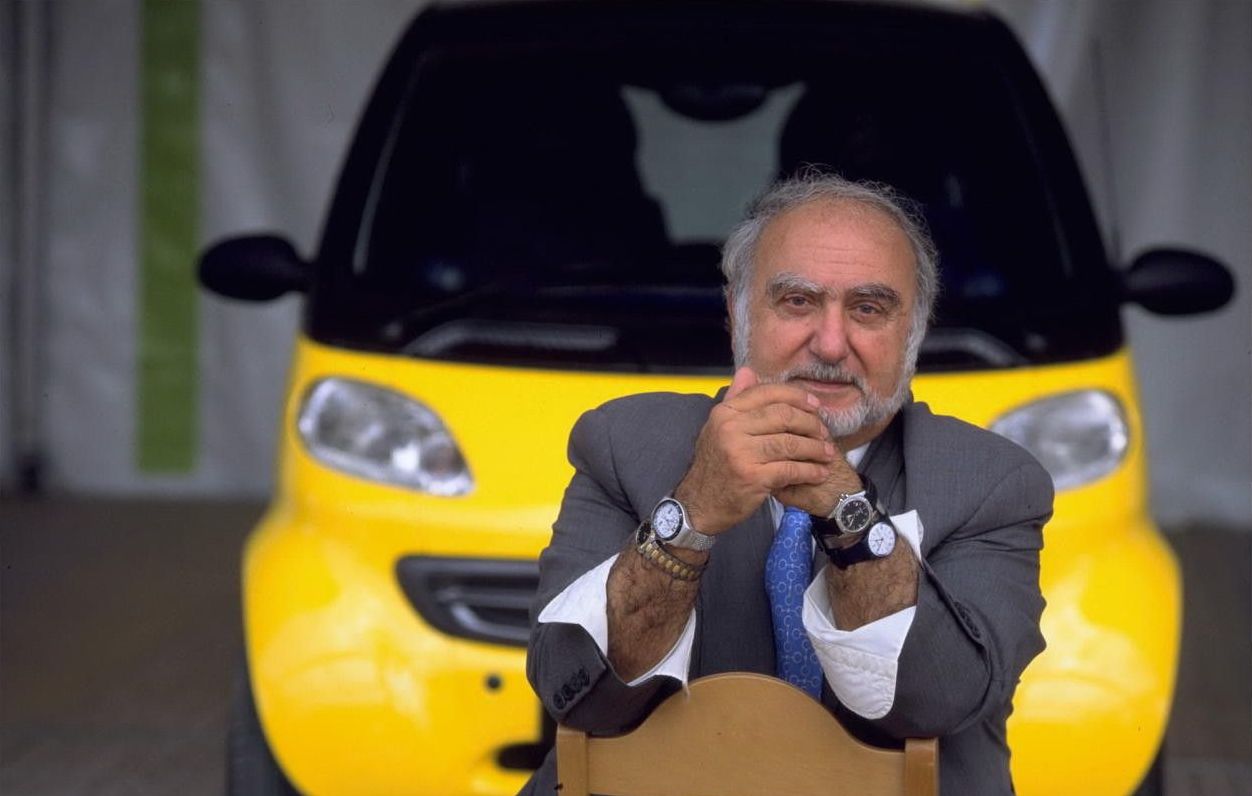 The VW cooperation with swatch, which is often forgotten today

In the meantime, Mr. Hayek also knew that he could not set up a car on his own. He knew everything about watches, but almost nothing about cars. Based on the progress made, he decided that now is the time to show to the well-known car manufacturers what they've got so far, so they would find a cooperation partner. He quickly found himself at VW, they made the car for the people and that was pretty much exactly what he wanted to do. Volkswagen itself was enthusiastic about his ideas and his passion. The then VW CEO Carl Hahn in particular found it all very exciting.

At the beginning of this cooperation, the two companies had to be brought together. The Germans had to learn that the project was primarily about the mentality from swatch and swatch had to learn that VW already has experience building cars and that some vetoes are therefore quite justified. Back when it was still a question of which manufacturer swatch would work with, every manufacturer wanted to advertise a car that they could convert. At VW, it was the Chico that they advertised to Mr. Hayek. But he immediately went into defense mode when he heard "classic car". In his opinion, the customer expected something out of the ordinary. "If it's traditional, then it's not from swatch" was his personal motto.

Another issue was the price. The planned car should be environmentally friendly, of good quality and still only cost 7,000 Swiss francs. It was definitely an ambitious goal, but later in interviews everyone involved said that they were definitely on the right track.

Speaking of interviews, it's really interessting how many languages Mr. Hayek spoke. At least once German, English and French. I think that not only his character and ambition got him so far in his career, but also that he could speak the most common languages in Europe and was able to meet so many business partners with their mother tongue. In the course of the cooperation, the two cooperation partners also realized that they were actually not that different. Of course, there was still the language barrier for the employees. Swatch primarily spoke French and VW, of course, German. But it was also nice to see that you can still exchange ideas when you have something important to say. In addition, many of the swatch people went to the German language course after work. They continued to concentrate on the all-wheel drive system and probably already then recognized what we know today from our series production electric cars: Quantum leaps are possible with the electric motor and improved traction is basically just a bonus to all of this.

The four-wheel drive system was tested further in 1992, this time in Sweden. The prototype that emerged from the cooperation already had better traction than a VW Golf with the powerful VR6 engine and all-wheel drive. Despite its limited-slip differential and all the other tricks that this state-of-the-art Golf had at the time. These successes are probably why VW was just as interested in the topic as swatch. I think even if nothing would come of the swatch car, VW would have for sure idead for what to do with the such a powertrain.

Mr. Hayek's ideas were being heard by a growing audience, he was at his peak and his opinion was in demand. At the United Nations Conference on Environment and Development, he made the following appeal: "As influential opinion leaders, you must lead the fight. To reshape our society and the way we live. This process should not be a mere gesture of protection. In the form of advice and financial Help. We need action. We need new patterns of behavior. New social structures. New goals and new products."

In a later interview, Mr. Hayek proudly stated: "The UN Secretary-General for the Environment gave me a great gift by applauding me. In the great hall and in front of the UN General Assembly. And he said: 'He will build the first ecological car .' He talked about the swatch Car. And then he said he hoped the people in the room wouldn't think he was advertising here." Hayek was able to motivate people, he was an excellent strategist and that's what got him this far. First in the watch industry and later also with his car.

At the same time, however, he also began to notice that the target of 7,000 francs was not feasible. Internally, there is now talk of a vehicle that will cost 14,000 francs, twice the previously thought price. The cooperation had its first design study. This also carried a logo which was a combination of the VW and swatch's SMH logo.

In August 1993, the swatch Hybrid and the swatch electric vehicle drive system were tried out on a site in Wolfsburg and presented to management. "Sixty people applauded and it was clear to see that the car had potential," swatch employees said later.

Unfortunately it was too late. It should now go downhill quickly. They had a good friend at VW in Mr. Carl Hahn, but when Dr. Piëch was inherited, it got icy. He didn't think much of this project and made no secret of it. His opinion was clear, he's a very good developer himself, he doesn't need new marketing, no new concept and he knows how to build small cars. Furthermore, another good reason against the cooperation with VW may have been that Dr. Piëch himself had a strong personality like Mr. Hayek.

In addition to all this, however, it is also important to state that VW was not doing particularly well at the time and one had to see where one could save costs, so that was the end of the dream of a VW swatch car.

It was a major setback, especially since it came as a bit of a surprise. But the consequences were felt quickly. Half the team at swatch was laid off, it was bitter. All in all, it was a turbulent time. On the one hand, everything had to be concluded with VW and swatch had to buy the 50% of the cooperation from VW, which VW still held on to. On the other hand, all sorts of manufacturers came and offered themselves. Still, despite the turbulence, swatch stuck to the project. They knew that they were on to something big and had working prototypes to back it up.

After discussions with all possible car manufacturers, it should continue with Daimler Benz. What appealed to Mr. Hayek the most was that they already had a similar project going and the same goals as swatch: a two-seater with space for two boxes of sparkling water and the right dimensions of the car.

In next article I will go into what Daimler Benz had already done before they then teamed up with swatch. A key figure here is Professor Tomforde: