It is common knowledge that all modern electric cars can charge with Type 2 or Type 1. This is a standardized plug that works across manufacturers.

But what exactly is it that makes it so special? How does it work and why did Mennekes take the trouble to develop it instead of simply charging all cars with a household socket? I would like to outline that in this article and if you want to go deeper, you will find many links to the smart eMotion Wiki. With the documentation there, you can effectively build a wallbox yourself or use it to build a tester to check wallboxes and charging stations.

But don't worry, the article itself is very general and shows even beginners how it works.

The type 2 plug has a lot in common with the commercially available high-voltage socket and yet, Mennekes has decided to create its own standard for electric cars. Although they are already leaders in power outlet sales.

Ultimately, type 2 is much safer for the end user, much more manageable and also more compact. It is the perfect all-rounder for AC charging of electric cars. When Mennekes submitted their proposal for a standard, the telephones literally never stood still. Everyone wanted to know what it was all about and had questions about it. Ultimately, this became the ICE 62196 standard, but I will refer to it as Type 2 in the following. Even if that is not 100% correct, it is simply much clearer that way. Type 2 and the related Type 1 connector became a hit almost overnight and has been a leader in all parts of the world ever since.

But first of all thanks to the community, smart eMotion would be nothing without them:

I myself have known the type 2 protocol for years and in the past have also done some tinkering with it. For example, so that I can operate a toaster on an electric car charging station. But when I went into depth again and wanted to document every last detail, Martin Groethky was a a big help. Many readers already know him from his road trip with the smart BRABUS electric drive around the Baltic Sea, apart from that he now also works at Mennekes. He was able to answer many more detailed questions and helped to complete this article and the smart eMotion Wiki.

Difference between type 2 and the usual high current socket

First of all, of course, it is important to know what the goal of the norm was. The primary function of type 2 is to make charging electric cars safe. You can also charge them via high-voltage current with an adapter cable, but then you immediately notice why charging stations have a type 2 socket. Type 2 plugs are much handier and easier to plug in. So you can do this elegantly with one hand or let a child do it. That is not possible with the usual high power current socket.

In addition, the type 2 communication between the charging station and the car ensures that everything is correct. There is no possibility of overloading the cable and it is also ensured that the plug is only connected to voltage when a vehicle is connected. So under no circumstances can anything ever happen. Type 2 makes charging electric cars safer in every aspect than refueling combustion engine cars.

The plug itself in detail

At the beginning an overview of how the pins of type 2 and type 1 are assigned. Here you can clearly see that Type 2 and Type 1 have the same pins. The only difference is that Type 1 has no "L2" and "L3" pin. This means that you can only charge 1-phase with type 1. So a maximum of 7,2 kW. Meanwhile, Type 2 can transmit 22 kW and on some charging stations even 43 kW. The most important thing to know is that both protocols are the same. Correspondingly, you can also adapt from type 2 to type 1 without any problems, but you are of course in this case limited to the maximum 7,2 kW type 1 can provide.

Type 1 is very rare in Europe. It is mainly used in the USA and partly in Asia, as there are only single-phase power grids there anyway. Apart from the old stock of vehicles and charging stations, there is nothing against introducing type 2 there as well. Type 1 is based on the SEA-J1772 norm, back from 2001, that's why you hear people refer to Type 1 as J1772 from time to time.

Anyone who has ever taken a closer look at a standard high-voltage socket will notice that Type 2 can be viewed as an extension of it. Type 2 also has an earth and neutral conductor as well as the 3 phases. In addition there are the "CP" and "PP" pins. These two pins are used for the communication between car and charging station.

Communication between the charging station and the car

The charging protocol via CP contact is a little more complex. Anyone who has ever taken a closer look at the charging socket on their electric car has already noticed that it is shorter than all the other pins. That is on purpose, I explain why below.

While PP is just a fixed value that does not change, communication between the charging station and the car takes place via CP. At the beginning there is just + 12 V between CP and ground. If you now plug your car in, the 12 V will tell it that it was plugged in. The charging station then starts the actual communication. There is now a 1 kHz PWM signal. You don't necessarily have to understand what that is, but it looks like this with pictures. 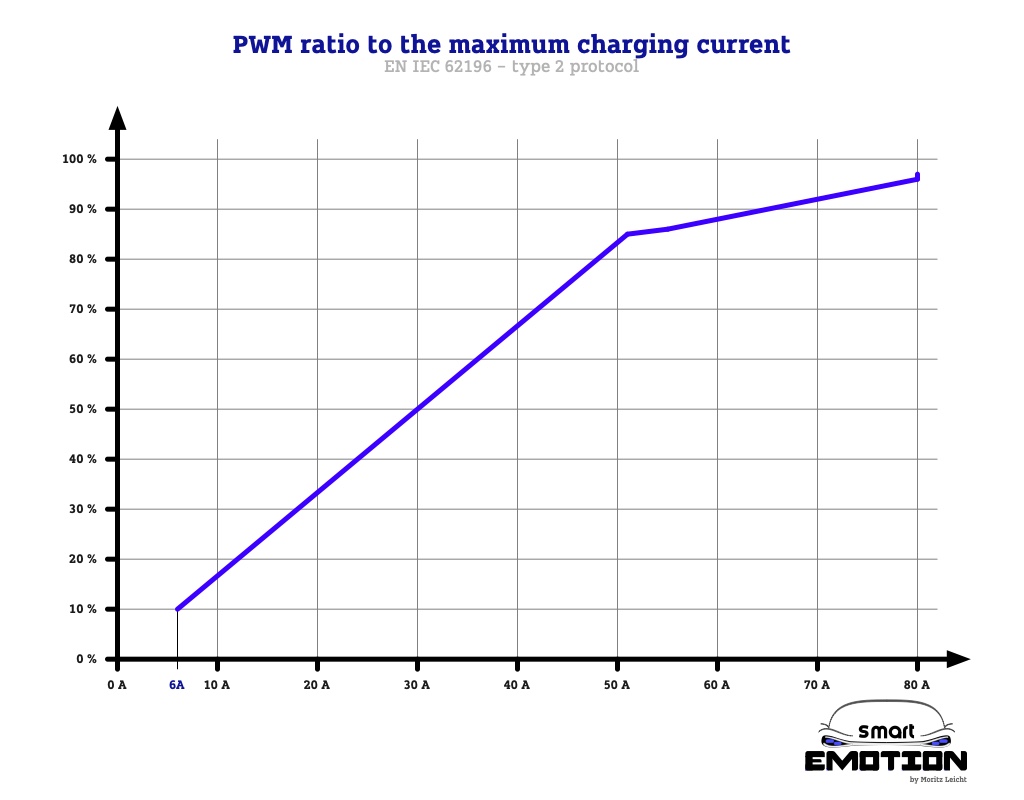 The PWM signal of the charging station can change during the charging process. Since it tells the car how fast it can charge, the car must always adhere to it and should the signal lowers, the car must charge accordingly slower. When the signal rises, the car can charge faster, but of course it doesn't have to. This signal is what a wallbox uses, for example, to ensure that the electric car only charges as much as the solar system is currently producing. In addition, the load management in parking garages works in this way.

While CCS also transmits the car's state of charge, type 2 dosen't. So the charging station doesn't know if or when your car is fully charged. But the station also doesn't need to know that, the car is keeping an eye on that.

A distinction is also made between different charging modes and charging statuses. But that is beyond the scope of this article. I advise you to take a look at the wiki:

.. I find it exciting, for example, that there is also a status that signals to the charging station that the charging area must be ventilated because the vehicle has a lead battery. A relic of the past, practically no type 2 vehicle drives around with this old battery technology. I assume that was carried over from the original SAE-J1772 protocol.

Nobody has to understand how exactly it all works. That's the motivation behind Type 2 and the whole norm around it. It just works and ensures that literally every child can charge an electric car safely. From a technical point of view, I am particularly amazed how easily it can be implemented, so that charging stations can be very cheap. The communication itself does not need any complex hardware. But it is precisely in the software that it is very sophisticated and covers many eventualities, so that all possible error scenarios, including those that I did not go into here, can be responded to quickly and safely defused.