What does the battery of the smart ED4 actually look like? What happens in it, how is it a new development compared to the ED3 battery and why is it called the E18-2evo, not just the E18-2?
In the following teardown I show you the entire battery and explain with many pictures what is where and what it looks like.

With the E18-2evo, Deutsche Accumotive GmbH & Co. KG has further developed the old E18-1 from the previous smart ED3. It might not look like that from the outside, since it has the same capacity as before, but it's definitely advanced. In contrast to the old battery, this time the cells no longer come from Germany, but are manufactured by LG. The specs are as follows:

The E18-2 was intended for the Renault Twingo, but Renault backed out and waited another 5 years before introducing an in-house development in the Twingo ZE. With the time pressure no longer there, the battery was further developed and so the E18-2evo for the smart EQ was created.

smart eMotion would be nothing without its community and supporters:

I would like to give a special mention to Thomas Rebele from Tom's Garage. As a motor vehicle master with high voltage certificate, Thomas is a great help. His workshop in Stuttgart (Germany) has helped smart eMotion readers by repairing smaller and larger defects. In his private life, he is fully electric, with a smart ED3 convertible and a Tesla Model 3. In the same way, all workshop employees are now fully electric.

I would also like to thank an smart eMotion reader who does not wish to be named. He had made his smart available for this endeavor and allowed us to open the battery and work on it.

Marcus Zacher from Blog GenerationStrom and Elektroautomobil, a German magazine all about electromobility, was a great help. He worked at Accumotive for 5 years and told us a few things here and there.

And last but not least, Vanja Katic from the EV Clinic, he contributed the photo of the battery cell so we didn't have to destroy the battery for it. 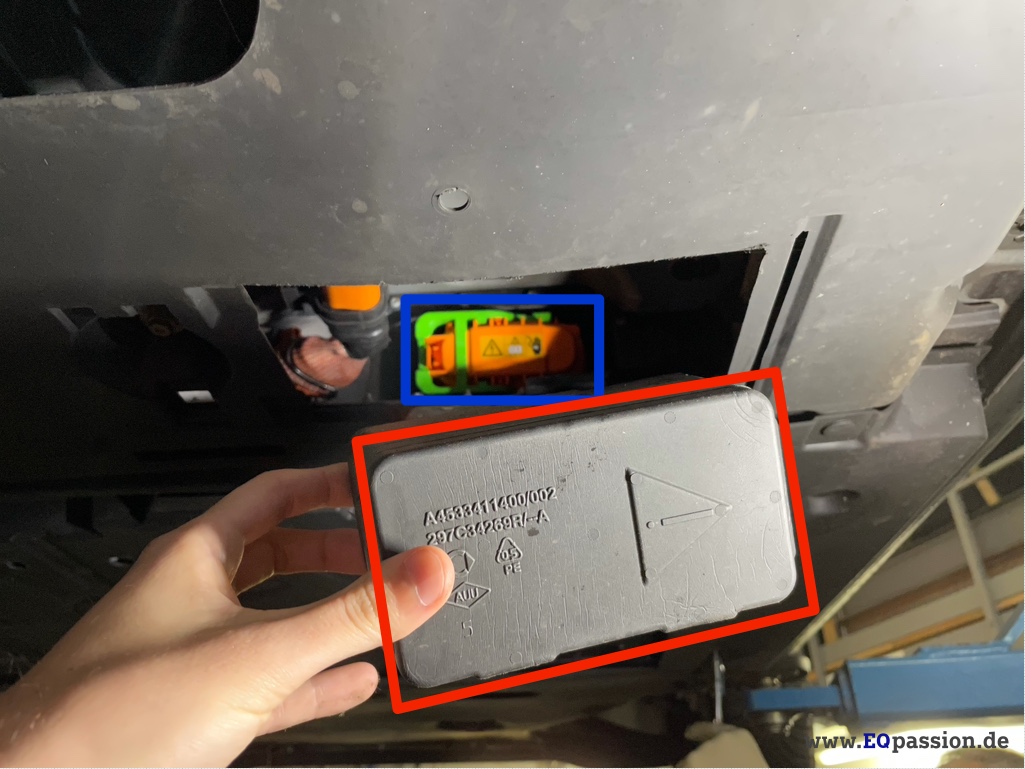 It sits near the rear right wheel and is covered by a foam cover. The Service Disconnect itself is attached to the battery from the outside. 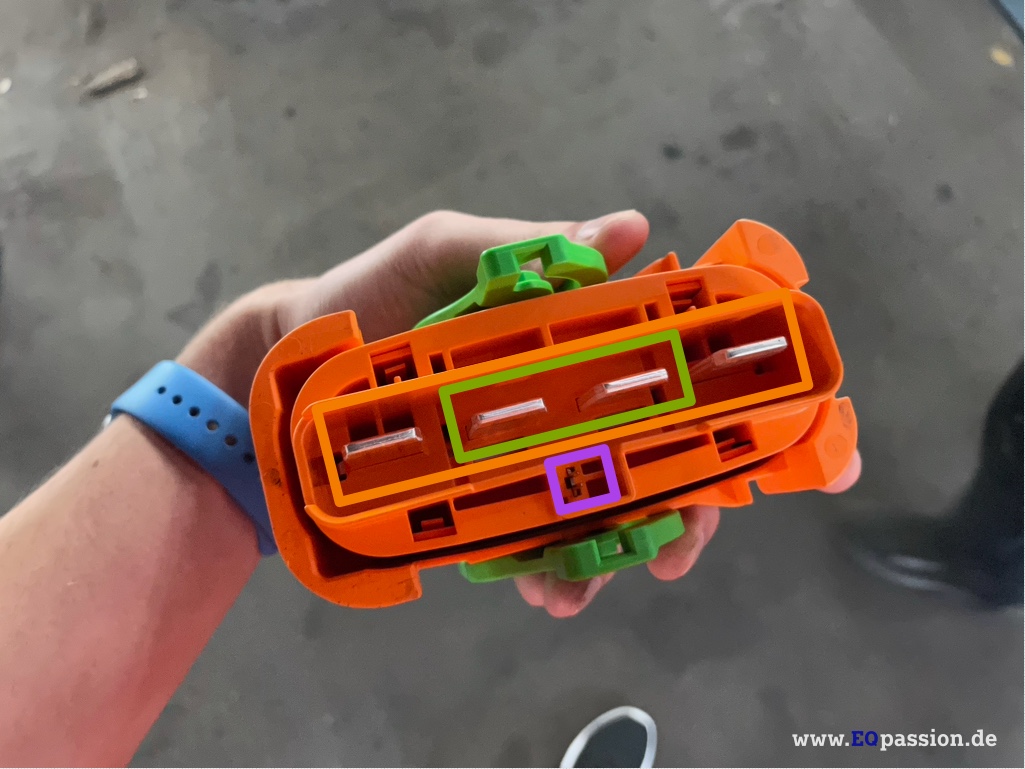 It not only contains an interruption of the interlock circuit, but also the current of the vehicle flows through it. If it is removed, the car is doubly protected against being under voltage. It also contains two fuses, one on the positive pole and one on the negative pole. This has the advantage that the fuses can be exchanged without having to remove and open the battery.

Step 2 - Orientation under the car 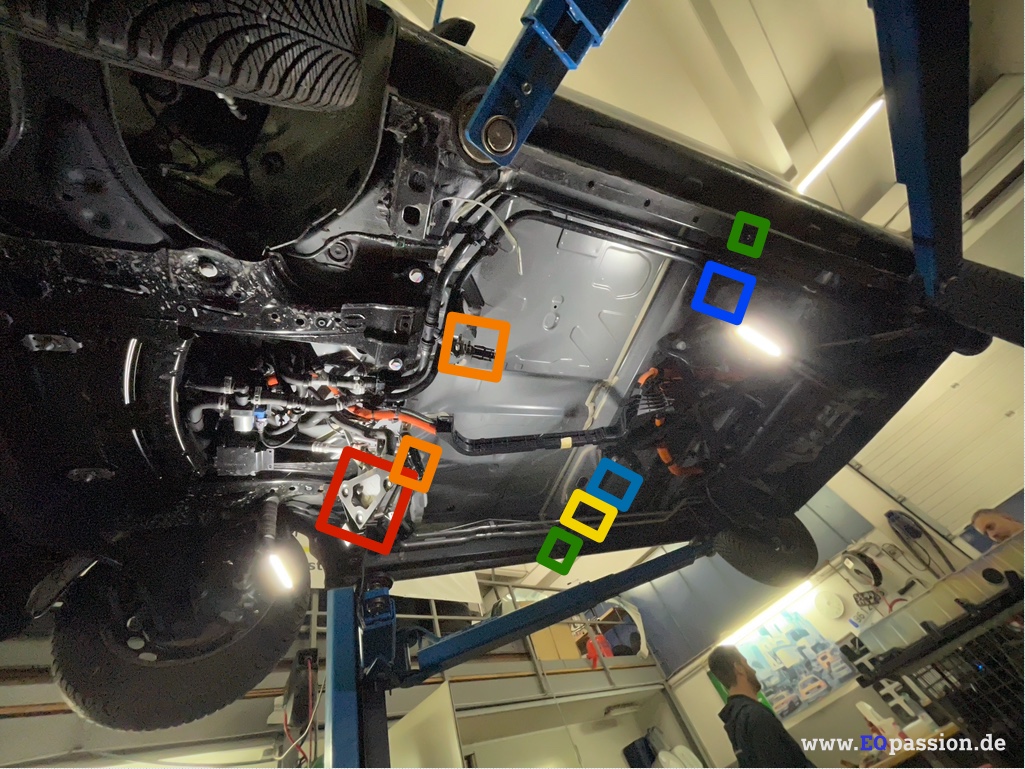 For orientation: The front of the car is on the left, the rear is on the right in the picture.

In order to be able to position the battery frame more easily, the smart itself has 2 pointed bolts for positioning the battery, which center the battery itself during installation. With the ED3, it is rather time-consuming to correctly position the heavy battery under the car so that it goes back into the car wonderfully and that all the holes match the screws. 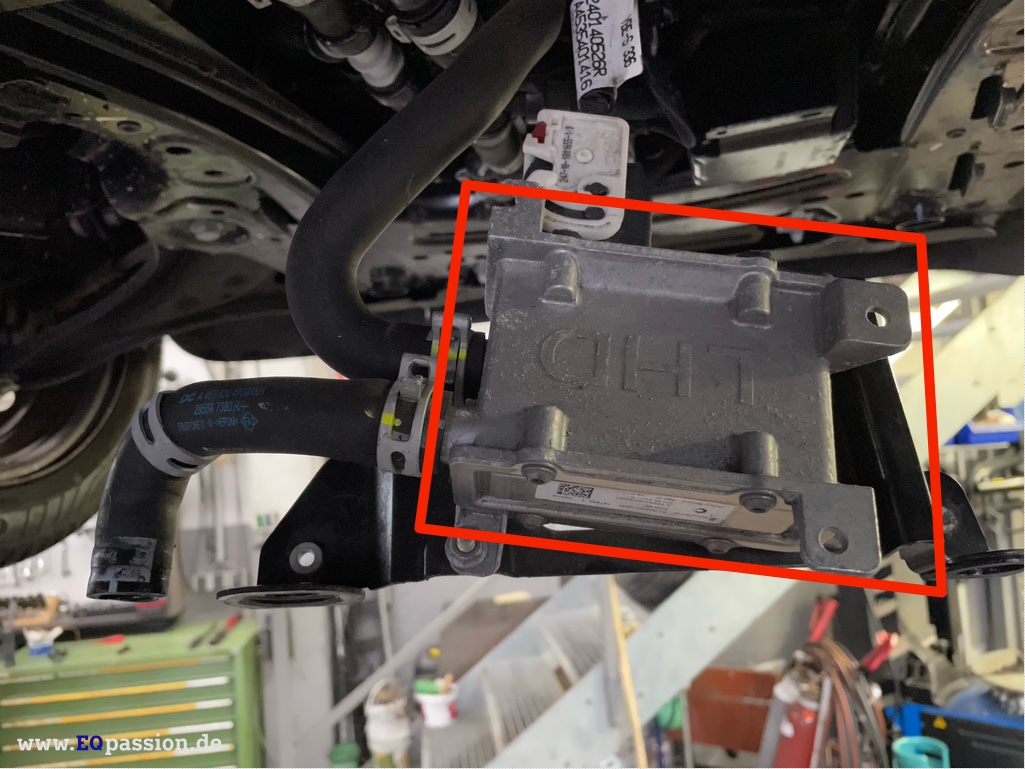 With the smart ED3 it was still the case that the battery heater was only integrated in vehicles with the 22 kW charger, which was subject to a surcharge. With the ED4 it is now the case that it is always there. It is in front of the battery and has a nominal power of 580 W. Due to the low power, it is powered by the 12 V system. It heats up the cooling water before it enters the battery. 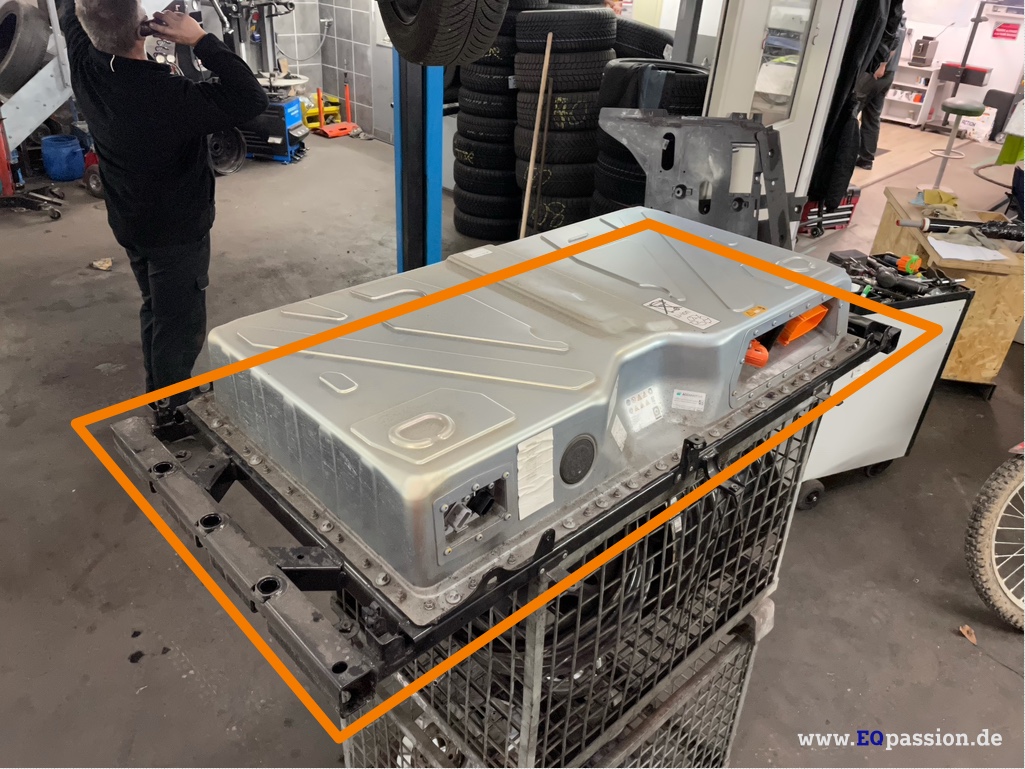 The battery itself sits on its own frame in the ED4. This also makes removal and installation much easier. It is screwed to this frame and the housing cover is also screwed to this. In contrast to the ED3, the lid is only screwed on here and then sealed directly with the integrated rubber lip. There is no more glue, which makes opening super easy and very inviting for any repairs. I have to honestly say that we were very happy about all of this and are really excited about how well everything is done. 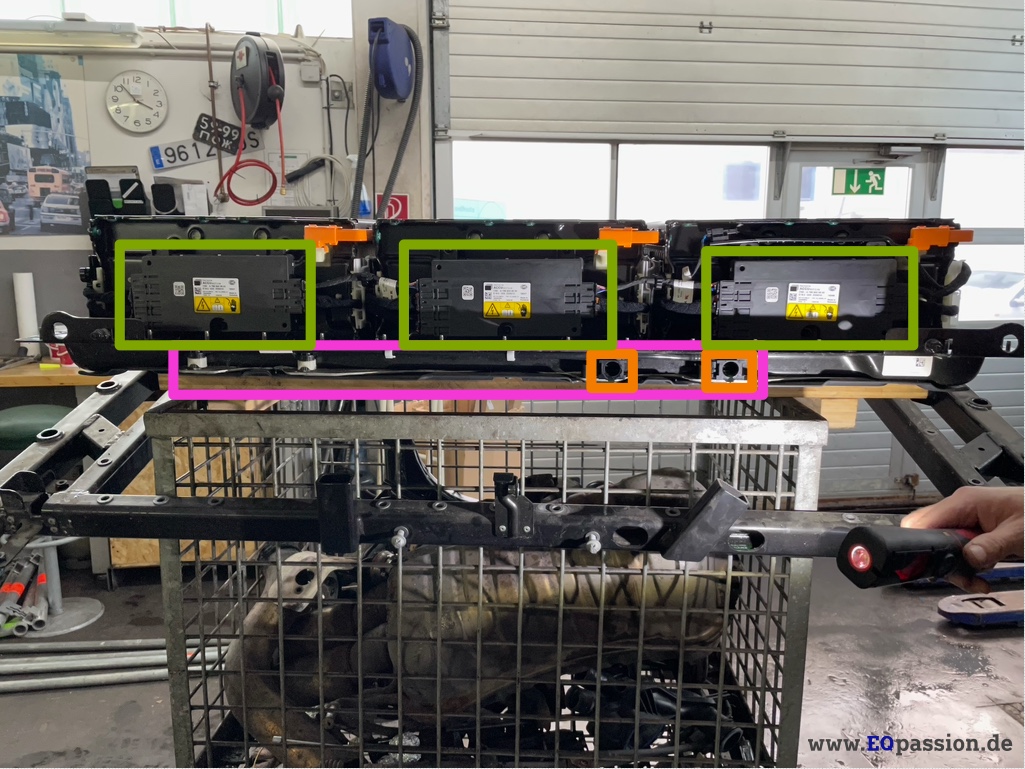 The water cooling of the smart ED4 has been completely redesigned. The cooling water used to run over the modules and went directly to the cell contacts. In the event that these cooling plates are leaking, which they never are in practice, the concept has now been redesigned. Now the coolant flows around the housing's bottom and is essentially outside the battery pack itself. This eliminates any risks.

The connections are roughly in the same places as before, the cooling water is then routed to the left and guided around in a double serpentine line under the entire battery. Incidentally, the CSE boards that monitor the individual cells and report to the BMS can also be seen above.

Step 6 - The connection for the BMS to the Can-Bus 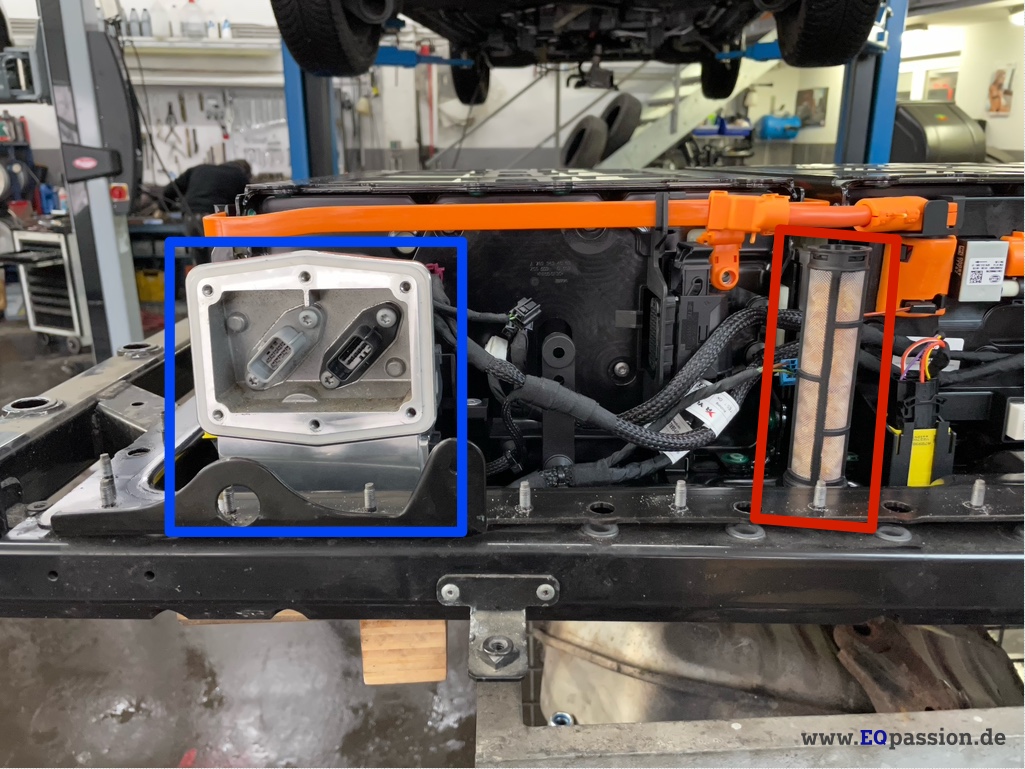 This is an extremely complex made housing for what is actually a fairly primitive purpose. This is where the smart's communication cables are being connected to the battery. In contrast to the ED3, the BMS itself is no longer visible from the outside. Instead, there is now this connection, which loops through the signal. This also includes a small circuit board that "separates" the external network from the internal network using an EMC filter. Apparently the pins for the HV contactors are only looped through here, so you could trigger them yourself, the BMS has no direct influence on this, as in the ED3. Instead, they are controlled by the rest of the car. However, we have not verified whether this is true.

To the right of this is the well known desiccant cartridge. It serves to bind any humidity in the housing. Due to the sealing, however, this is usually superfluous. "Better be safe than sorry" applies here. It is identical to that of the ED3 and even has the same article number: A 789 340 33 00 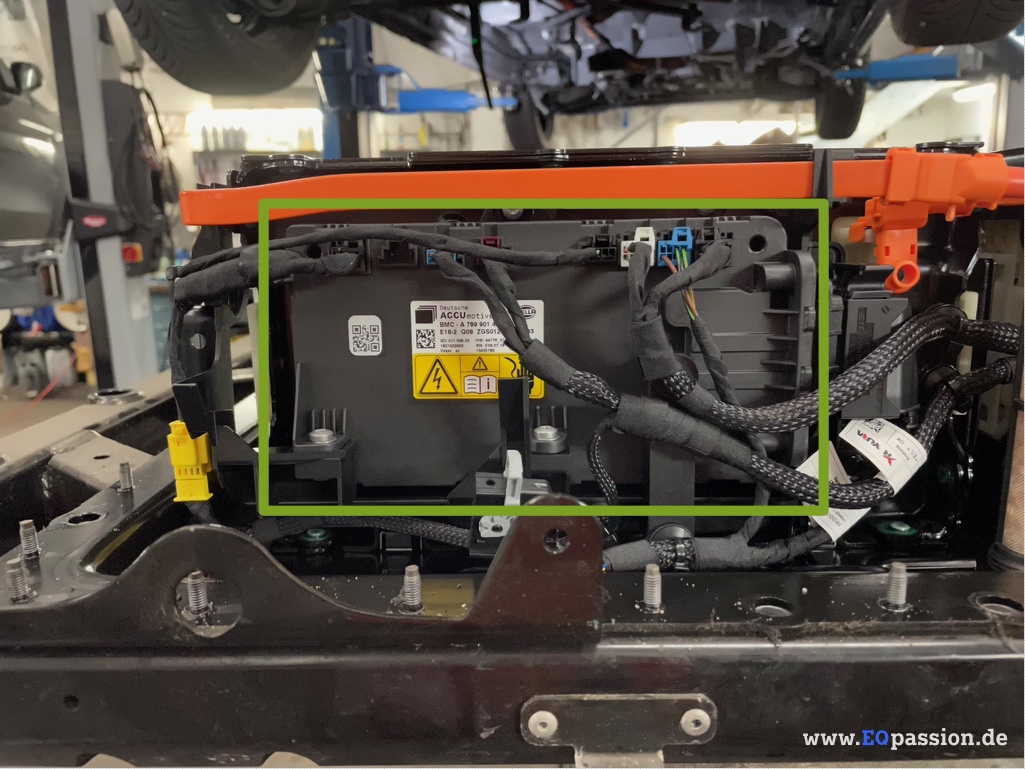 The heart of every battery is the BMS (Battery Management). It keeps the overview and gives instructions on how to deal with the battery. It also informs the rest of the car about the status of the battery. It is also the BMS that tells the charger what to do when charging. 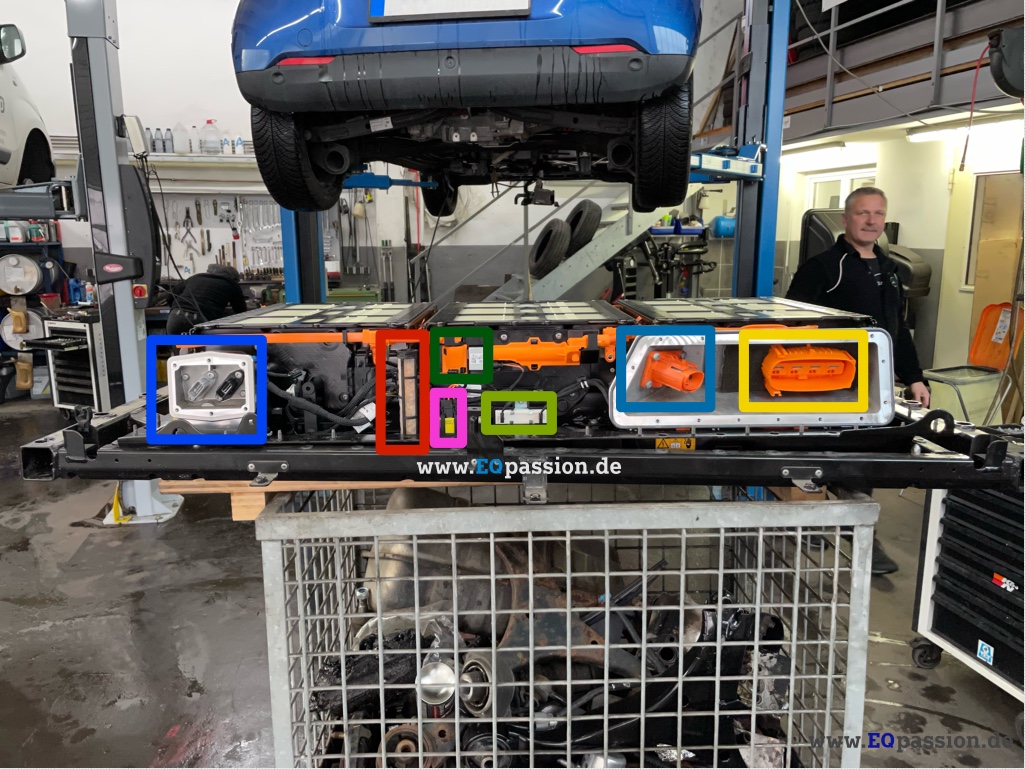 On the far left we have the connection for the CAN bus again, next to it the desiccant cartridge. Then comes the current sensor, the relay and the series resistor for the pre-charging circuit. On the far right we have the HV connection through which the battery supplies the vehicle with 400 V and to the left of it the ServiceDisconnect. 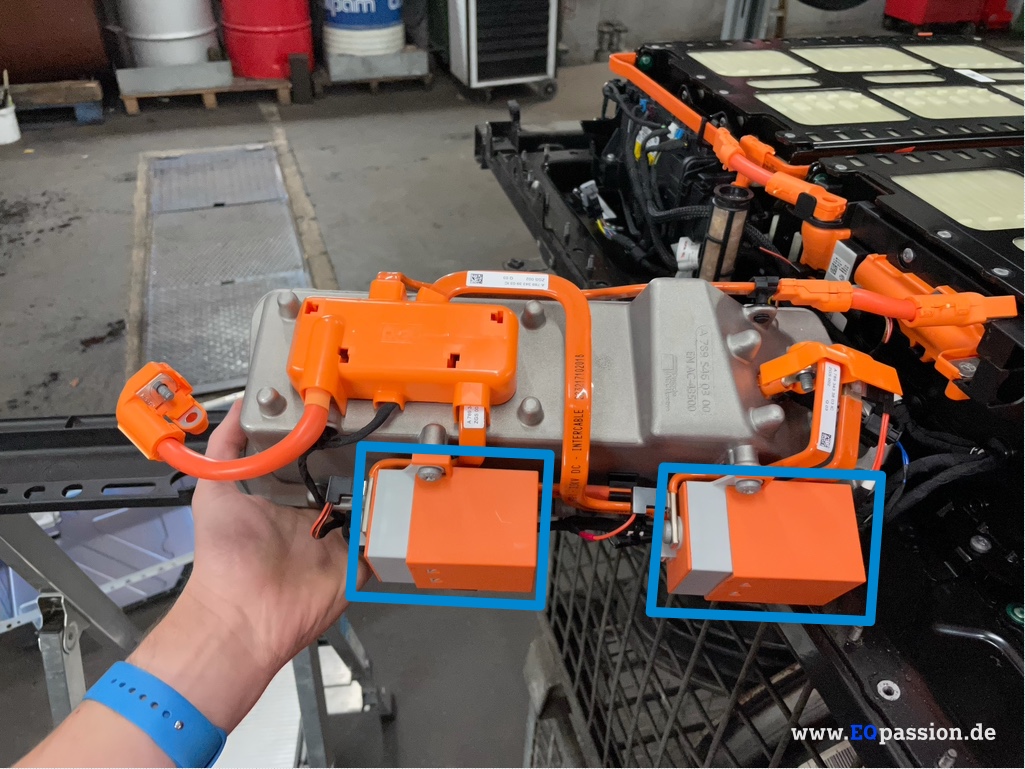 Behind the HV connection in the ServiceDisconnect we then find the two HV contactors. You hear them every time you switch the smart on or off. Also when charging starts or ends. They ensure that high voltage is only present when driving and charging. The way the battery is lying around here for the photos, there is no voltage at the HV connection. 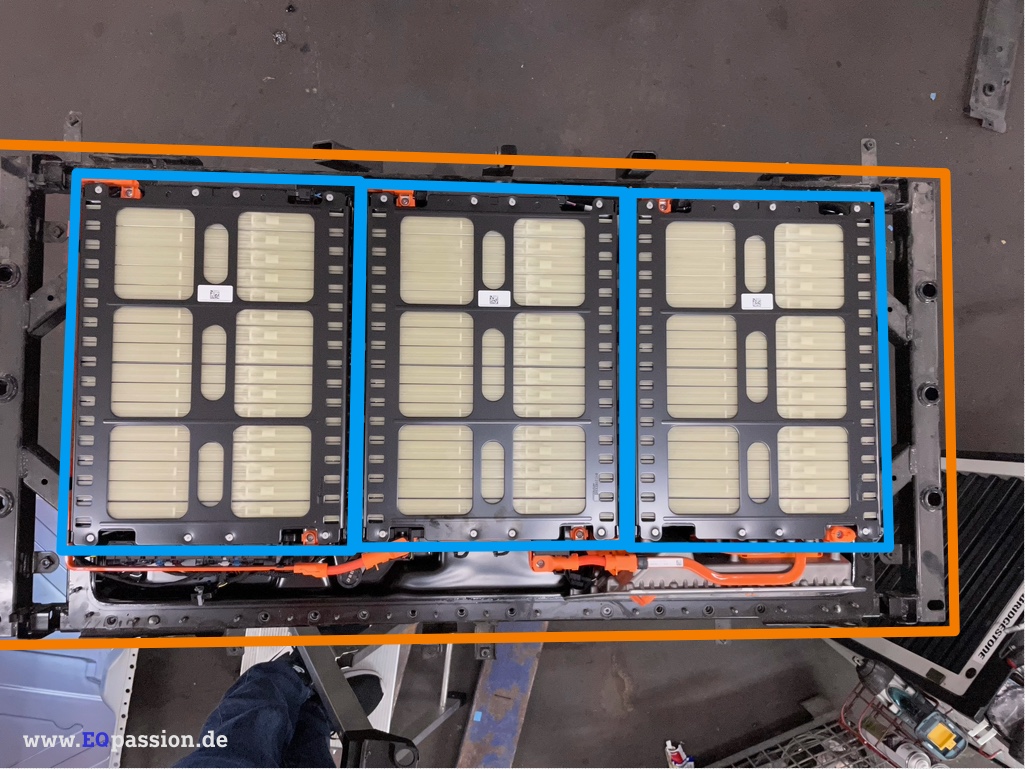 The frame on which the battery sits can be seen here. You can also see the 3 modules that make up the battery. Each of the modules has 32 cells and is identical to the other modules. 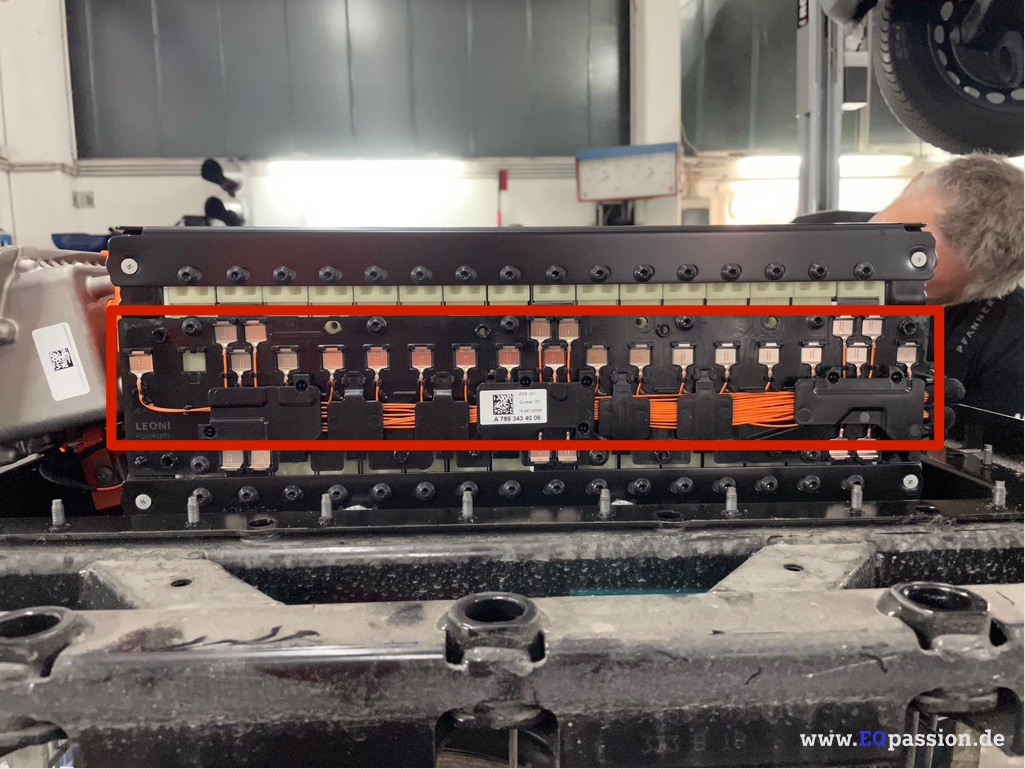 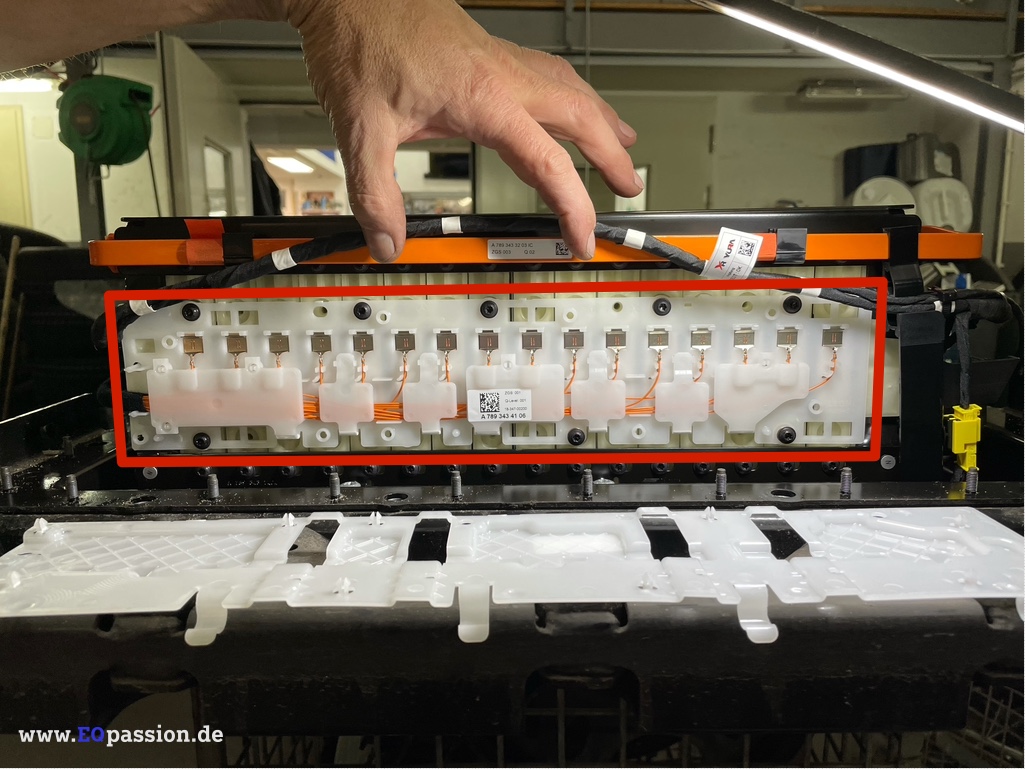 The balancer connections are on the left and right of the modules and go directly to the CSE, which is responsible for balancing the individual cells. The whole thing looks a bit cumbersome compared to the smart ED3, but there are good reasons, which I will explain below with the cell.

Step 12 - The Cells and their cooling themselves 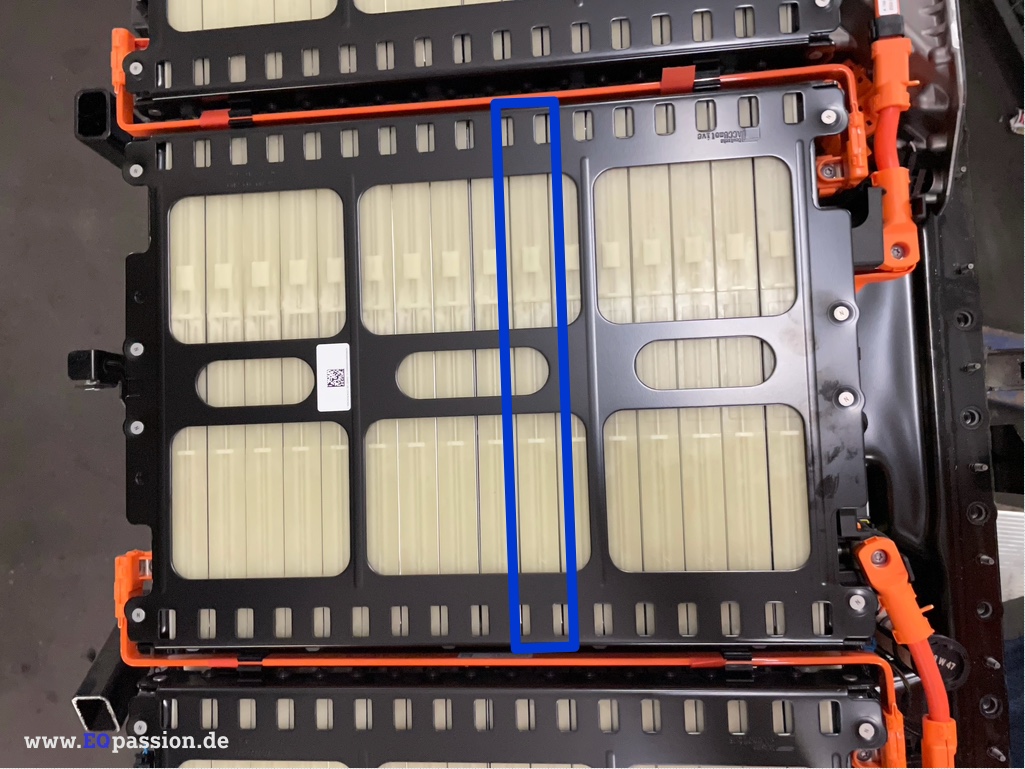 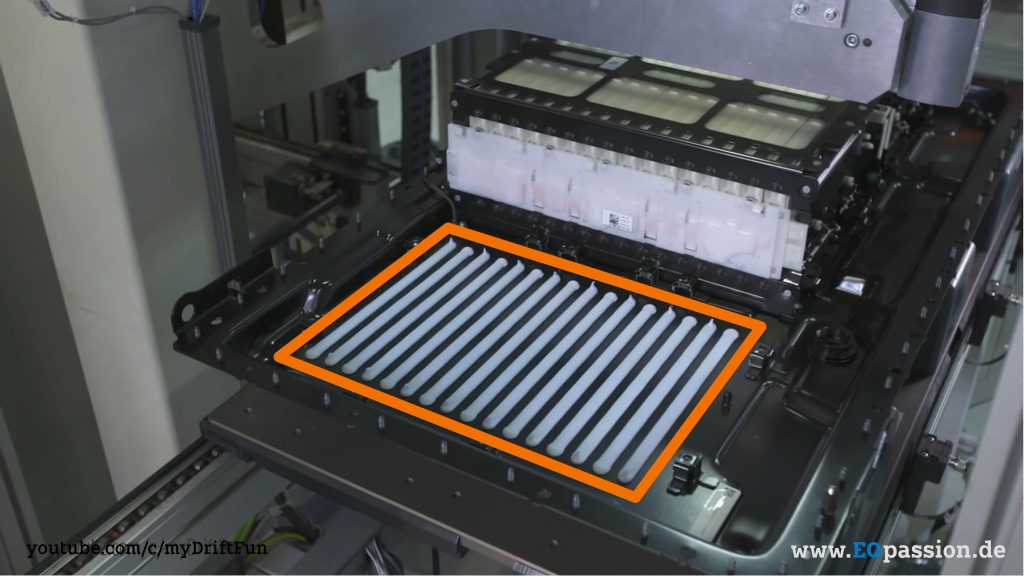 The cells are in these cassettes, they're in there lengthwise, and each cassette contains two cells. Between the cells are heat-conducting swords, which then absorb the heat of the cell from the entire surface and conduct it down to the bottom of the battery case, which is then cooled on the other side by the cooling circuit. In fact, this is not the best way to cool a cell since the exterior surfaces are not ideal for cooling cells.

The cooling of the poles of a cell is the most effective, since these are best at "going into the cell" and thus dissipating the heat "from the inside out". I don't know why the decision was made to cool the surfaces of the E18-2evo. However, the cooling should be more than sufficient for the application of the smart. 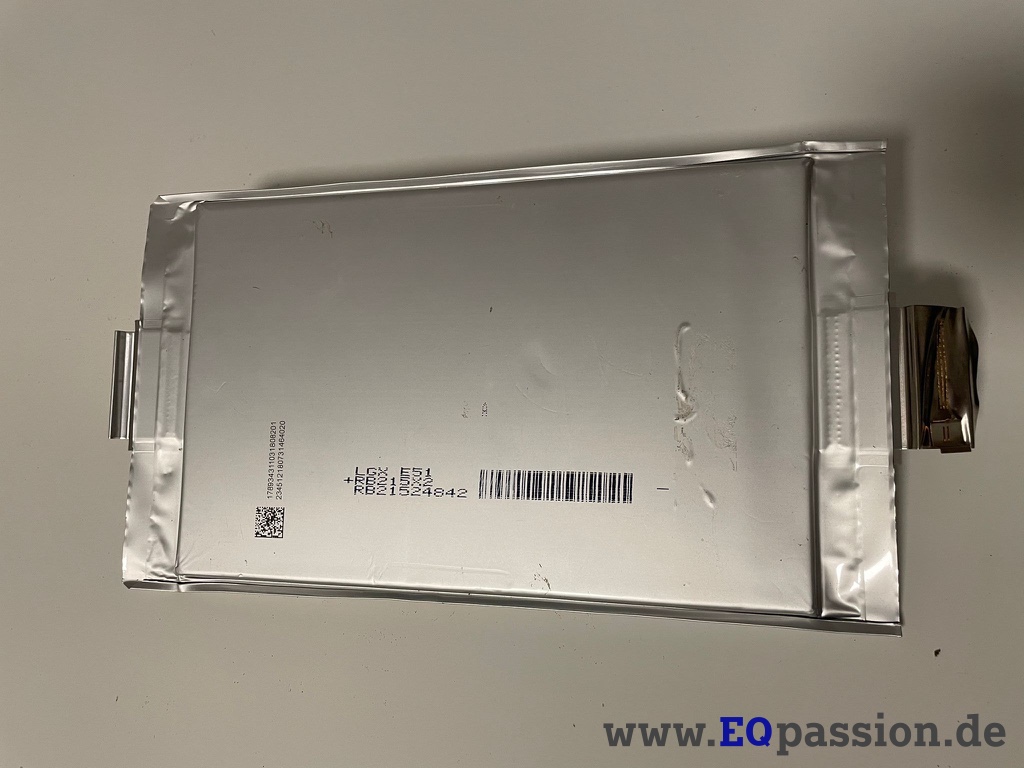 The battery cells are LG E51 from LG Chem Ltd. Instead of having the connections next to each other at the top, the ED4 has them on the left and right. This ensures that the currents flow more evenly through the entire cell, making it more durable. That's why they decided to build the cells like this and build everything else around them. Even if it seems cumbersome, it has its advantages. 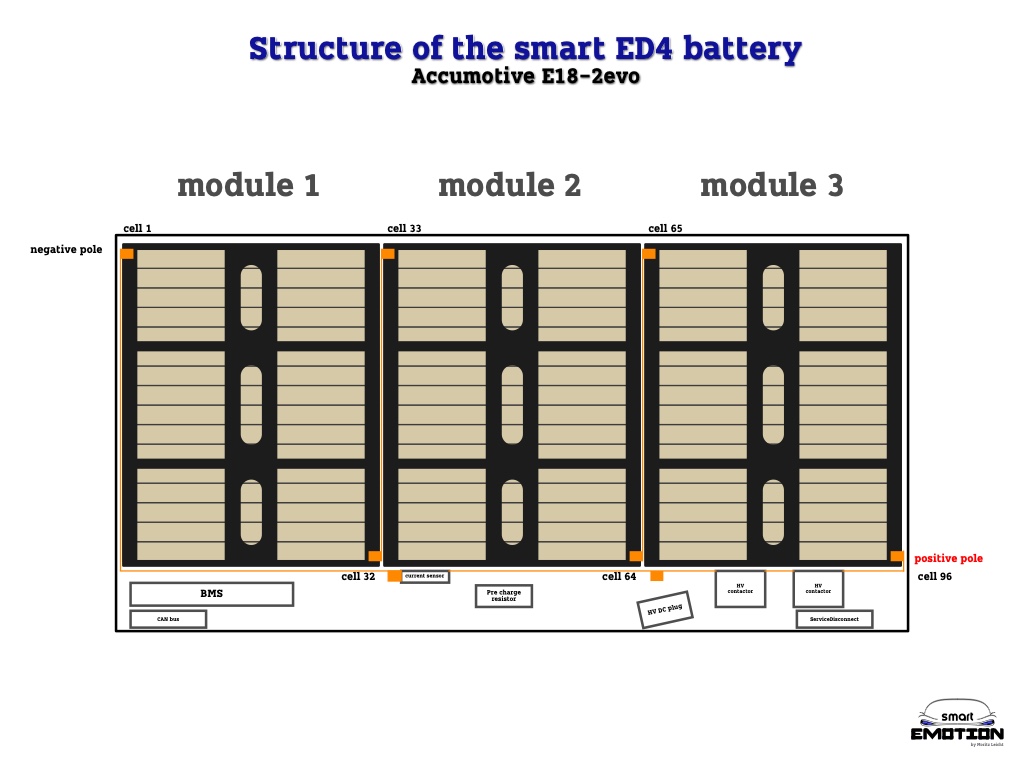